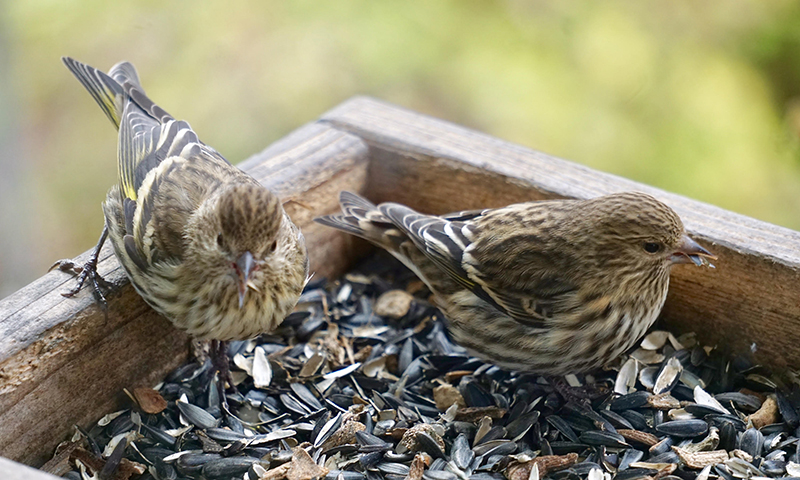 “Everything is nearly copacetic. I’ve changed all my passwords to something secure that I’ll never be able to remember. My neighbor Weasel told me that I should get tattoos of all my passwords. He’s goofy, but I’m trying to apply some of Weasel’s teachings to my life. Whenever life gives Weasel lemons, he squirts them into someone’s eyes. Our minister is long-winded, but his sermon this week was considerably longer than normal. When I shook hands with him as I moved towards the door, I said, ‘Your sermon was wonderful. It was invigorating, inspiring and instructional.’ The minister broke out his best Sunday smile. I think he was about to give the sermon an instant replay when I added, ‘Why I felt like a new man when I woke up.’”

The weather had been cold. It reminded me once more that there is no such thing as bad weather, only the wrong clothes.

The first week of November brought an influx of pine siskins to my feeders. Some years, siskins don’t stray far from their breeding territories in northern U.S., across Canada and into Alaska. The cones produced by the conifers there are generally plentiful and siskins use the seeds as food to survive the winter. The winter movements of siskins are erratic and often driven by the state of those cone crops. Every couple of years, siskins irrupt and move into the central and southern parts of the continent, but the timing and scale of these movements are variable. Every three to five years, some trees produce enormous quantities of seeds and during some of the years in between this abundance, they produce almost none. In the years when the mast production is uniformly depressed, pine siskins move southward looking for food. They mix with flocks of goldfinches at the feeders (the siskins are the ones in the striped pajamas) and brighten our days with their loud zreeeet sounds like someone slowly tearing a sheet of paper in half.

My yard also entertained rusty blackbirds. The blackbirds flipped over fallen leaves in search of food as I once flipped over rocks in the hopes of finding ants and beetles.

Turning over a new leaf at the ABEF

I’m proud to serve on the board of the American Bald Eagle Foundation located in Haines, Alaska. The Mission of the ABEF is the conservation of the bald eagle and its habitat through education and stewardship.

Katie Dickerson is the museum coordinator at ABEF. Until earlier this year, the museum used real leaves to cover the floor of dioramas. This practice threatened specimen safety. Eventually, the leaves dry and crumble. This creates dust that dirties the museum and can cause degradation of specimens. Insects and their larvae can come with the leaves and become pests. Katie replaced the real leaves with 14,500 artificial, but realistic-looking leaves. The dioramas had no complaints. Happiness abounds.

Marv Lenze of Albert Lea saw two bald eagles fighting in November. He asked why they were battling at that time of the year. The dispute was over food, perching position or pecking order.

“My father talked about wild canaries. What kind of birds were they?” That is a nickname for American goldfinches. My father called them that, too. This lovely little bird has a number of nicknames, including thistle bird, lettuce-bird, shiner, salad-bird, yellow goldfinch, beet-bird and catnip-bird.

“I watched a bald eagle wiping its bill on the branch of a tree. Why does it do that?” It’s because it doesn’t have a napkin. Avian beaks (bills) are made of keratin, the same material found in human hair and fingernails. In most birds, keratin grows continuously and is worn down by normal activity. A raptor’s beak is worn down by the bones, scales, feathers and fur of its prey. Feaking, which is the term for the process of rubbing the beak clean on branches or other hard surfaces after eating, removes the debris from the beak and trims it. When your feeder birds wipe their beaks, they might be removing debris left from cracking shells and consuming oily seeds. They could also be honing their bills.

“Where did all my doves go?” They left. Mourning doves may be common in your yard all year-round, but the doves you see in the winter might not be the same as the ones you saw in the summer. Your doves might have migrated southward to their wintering grounds, while the mourning doves that breed further north might have moved into your yard for the winter. The replacement doves are typically fewer in number than those that left.

“The amount of sleep required by the average person is about five minutes more.” —Max Kauffmann

“Blessed are those who can laugh at themselves, for they shall never cease to be amused.” — Anonymous