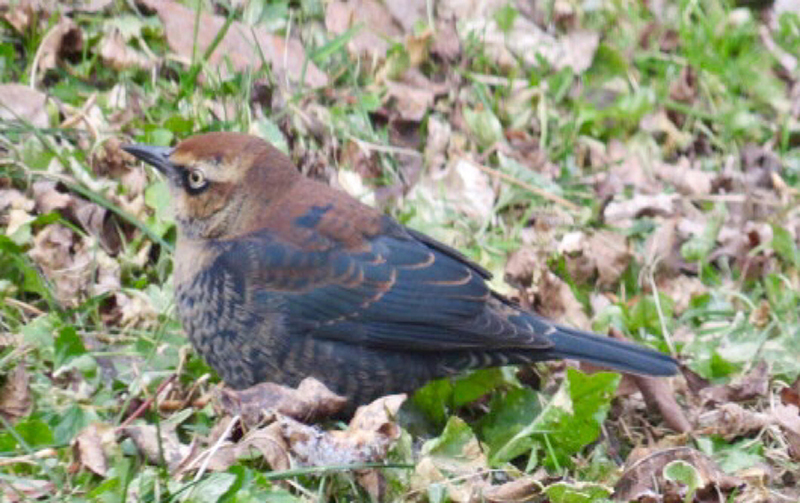 “Everything is nearly copacetic. I ran out of shaving cream this morning and used peanut butter as a replacement. It worked, but I felt nutty using it. I was also out of conditioner, so I used peanut butter on my hair, too. Just call me Skippy. I remember when we were in the second grade and Mrs. Demmer asked us to describe ourselves in three words and you wrote, ‘I can’t do that.‘ You were wordy and bad at math even then. My favorite pizza shop is one that never puts pineapple on my pizza. I’m so serious about losing a few pounds that I’ve given up delivery pizza. From now on, it’s all takeout for me. When I delivered pizza, a man gave me a $100 tip. I was sure he didn’t mean to. I’ll admit that I was tempted. I almost told him about it. We had a vegan Thanksgiving this year, but it didn’t help. The relatives still showed up. Even so, it was the best Thanksgiving ever. Pop wore pants.”

I was pleased to see rusty blackbirds in my yard. This blackbird with its distinctive rusty feathers (in non-breeding plumage) and yellow eyes is one of North America’s bird species declining most rapidly, with its population dropping more than 80 percent over the past 40 years. Scientists are unsure as to the cause of this reduction, but the loss of habitat is suspected. Rusty blackbirds are denizens of coniferous forests with lakes and bogs, breeding in the northern muskeg region and wintering in the eastern U.S. where they form small flocks.

Michelle May, who lives near St. Clair, spotted a short-eared owl on the ground this fall. A friend, the late Charles Flugum, wrote a wonderful book titled, “Birding From a Tractor Seat.” That’s what Michelle was doing. This owl is a stunner, with black-rimmed yellow eyes staring out from a pale facial disk. Look for these owls in open fields or grasslands near dawn and dusk. They might be on the ground or hunting while flying silently and low on buoyant, floppy wingbeats, looking much like a giant moth.

“Where is the best place to go to see the most bird species?” It’s probably the northwestern part of South America — Colombia, Ecuador, Peru and part of Brazil. Ecuador, slightly larger than Wyoming, has over 1,600 bird species.

“Why do birds have pecking orders?” A pecking order is more than mere bullying. It’s not unlike a corporation’s organizational chart. With age and experience comes the benefit of enhanced feeding and roosting opportunities. A bird at the top of the pecking order gets a better parking place, just as a CEO does. Research has shown that dominant birds forage in safer locations and roost in more secure areas. This leads to less predation.

“Are circling vultures a dead giveaway?” Contrary to popular belief, circling vultures don’t necessarily indicate the presence of a dead animal. Circling vultures may be gaining altitude for long flights, searching for food or frolicking. Vultures soar on thermals of warm, rising air. This allows them to conserve energy in flight. After rising on thermals, they glide as far as possible before needing to flap their wings to regain altitude. They also rely on warm air thermals to remain aloft while searching for food. When vultures find food, they typically descend quickly to a small carcass. When a large carcass is discovered, a group of vultures remains aloft until sufficient numbers have arrived to dispose of the carrion in a timely fashion. They aren’t known to circle dying animals.

“I have cardinals that nest in my yard, but none of them are here in the winter. My neighbor has a flock of them in his yard during the winter. Why him and not me?” It’s because they have always liked him best. Cardinals join flocks during the non-breeding season. The flocks are temporary groups with a composition that changes frequently. This aggregation happens because a cardinal’s strong territorial instinct lessens in the winter. Cardinals eat the same foods and seek the same winter shelter, so it makes sense they would congregate. As a group of cardinals moves about, its activities attract other redbirds. Research has shown flock size to increase as temperatures fall. Approximately 60 percent of adult cardinals survive from one year to the next. Most of the mortality occurs during the winter. The cardinals hang around your neighbor’s place because the shelter and food found there meets their needs. Water and tradition might play a part, too.

“‘Thank you’ is the best prayer that anyone could say. I say that one a lot. Thank you expresses extreme gratitude, humility, understanding.“ — Alice Walker

“I am grateful for what I am and have. My thanksgiving is perpetual.” — Henry David Thoreau