A memorial service for Richard D. Westurn will be at noon Monday at First Presbyterian Church in Albert Lea. The Rev. Dwight Netzer will officiate. Visitation will be one hour prior to the service. Military honors will be accorded by the Albert Lea area veterans organizations. Burial will take place at Fort Snelling National Cemetery at a later date. 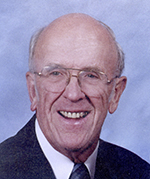 Richard Duane Westurn was born Dec. 19, 1931, in Hibbing, to Floyd and Victoria (Eck) Westurn. He grew up and was raised in Hibbing, and would graduate from Hibbing High School in 1949.

He would go on to enlist in the U.S. Navy and served for nearly four years, until his honorable discharge. After his return, he went to the Minnesota School of Business. He graduated in 1955 and worked for Wilson & Co. in Albert Lea, where he worked in the accounting department.

On Sept. 10, 1955, he was united in marriage to Barbara (Borgeson) in Hibbing. To this union, four children were born: Steven, Susan, Mary Ann and John. The family moved several times to follow Richard’s work. They lived in Park Forest, Illinois, back to Albert Lea, Cedar Rapids, Iowa, and then would return to Albert Lea, where they would remain residents. Dick served as office manager in both Albert Lea and Cedar Rapids locations. He was transferred back to Albert Lea as the administration assistant to the manager, and then was promoted to plant manager. He served that role until the plant was sold to Farmstead. He was then employed by Jobs Inc.

He served on the Freeborn County Chemical Department, YMCA Board of Directors, United Way, Jobs Inc. Board, Minnesota Safety Council, was treasurer for First Presbyterian Church, Board of Directors at Naeve Hospital, Wells Fargo Bank and was a member of the American Legion and was a part of the Freeborn County Softball Hall of Fame. Dick was active in Boy Scouts, having served as scoutmaster in both Cedar Rapids and Albert Lea.

Above all, Barbara, his wife, was Dick’s true love. They spent several years vacationing in Florida during the winter months. They both loved to exercise and spent many hours at the YMCA and biking on various bike trails.

He is preceded in death by his wife, Barbara, on May 5, 2017; and parents Floyd and Vicky.