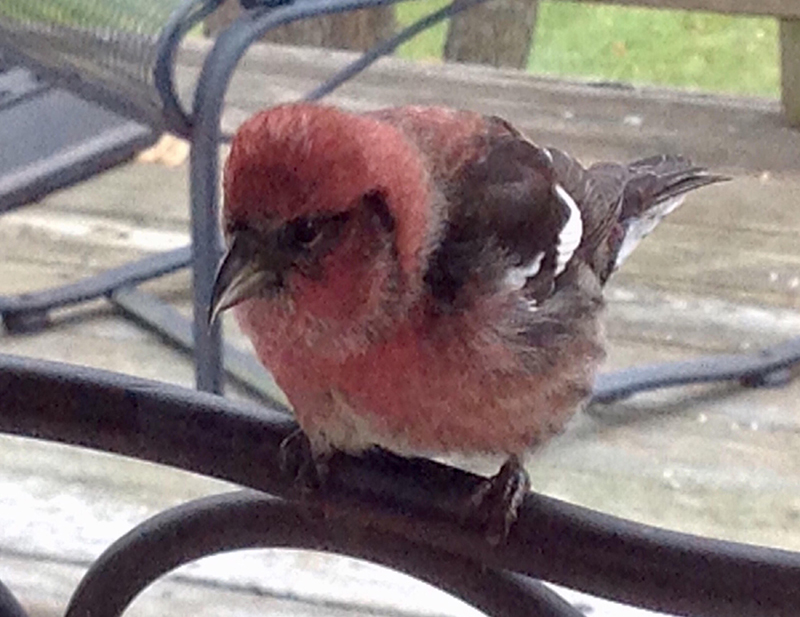 This photo of a white-winged crossbill was taken by Norm Emerson. Provided

“Everything is nearly copacetic. I’ve been contemplating my belly button. I’ve decided that I have the great American navel. Inspired by that, I bought a roll of postage stamps. Each stamp has ‘love’ on it. I refuse to use them to send any bill payments. I don’t love spending money. I made a corn maze on the farm this year. It was only 12 plants, but it confused my family.”

“Did you have an adult beverage as a toast to Thanksgiving?” I say.

“You know me, I never drink anything stronger than Pop. Of course, Pop will drink anything. Pop is no spring chicken. He’s not even a fall chicken, but I’m thankful that he’s taught me so much. He taught me that any place could be an emergency toilet. That’s a handy thing to know.”

I saw a Christmas tree tied to the roof of a car. ’Tis the season. I had the desire to toss a couple of Christmas decorations onto the prone tree.

It’s also the season for muskrat mounds, otherwise called houses, push-ups or lodges. A muskrat doesn’t haul in logs and pack mud between them as beavers do. It fashions the mounds out of grasses, reeds and sticks. The mounds serve as homes in the winter. Muskrats eat the roots, stems, leaves and fruits of water plants, such as cattails, wild rice, water lilies and rushes. It also eats small fish, clams, snails and turtles. A muskrat doesn’t store food for the winter. It leaves its house to reach plants under the ice. Its name was probably derived from “le rat musque,” a French name shortened to muskrat. Otters and mink are its prime predators.

I noticed spherical lumps on the stems of goldenrod plants during my walk. This gall is produced in response to a goldenrod gall fly laying an egg on a young goldenrod stem in the spring. When the egg hatches, the larva burrows into the plant stem. The larva’s saliva, believed to mimic plant hormones, causes the plant to produce exaggerated growth, which provides the larva with food and protection. The larvae provide food for birds such as woodpeckers, chickadees and nuthatches.

William Wordsworth wrote, “I wandered lonely as a cloud.” No cloud was lonely on this day. It was cloudy enough that there was no room for another cloud in the sky. Cloud watching is as contagious as yawns in a sleep clinic. Does that cloud look like a rabbit or an electric sander? From a certain angle, each cloud looks like a cloud.

Harry Potter’s owl, Hedwig, was a female snowy owl. Snowy owls nest in the arctic tundra of Canada and Alaska. This large, white raptor comes to Minnesota in the winter to hunt voles, mice and other small animals. Their migrations are widespread and unpredictable.

“How can I tell the difference between a male and a female blue jay?“ The two look identical to the human eye. Watch as it comes into a bird feeder. If he eats, it’s a male. If she eats, it’s a female. The incubation of the eggs is done almost exclusively by the female.

“What eats ticks?” There are a number of things that occasionally feed upon ticks. Guinea fowl, wild turkeys, pheasants, other birds, ants, centipedes, spiders and opossums.

“Do you think cats really have nine lives?“ Why not? A frog croaks every night and still lives. Indoor cats have 17 lives and outdoor cats have but one, so it averages out to be nine.

“I encourage people to be nice to their pets. They’ve seen you naked and not laughed. Okay, maybe they do laugh, but they have the decency to wait until you leave the room.”— Oliver Christianson

“When I rise up, let me rise up joyful like a bird. When I fall, let me fall without regret like a leaf.” — Wendell Berry