Top 10 most read columns, editorials and letters to the editor of 2017 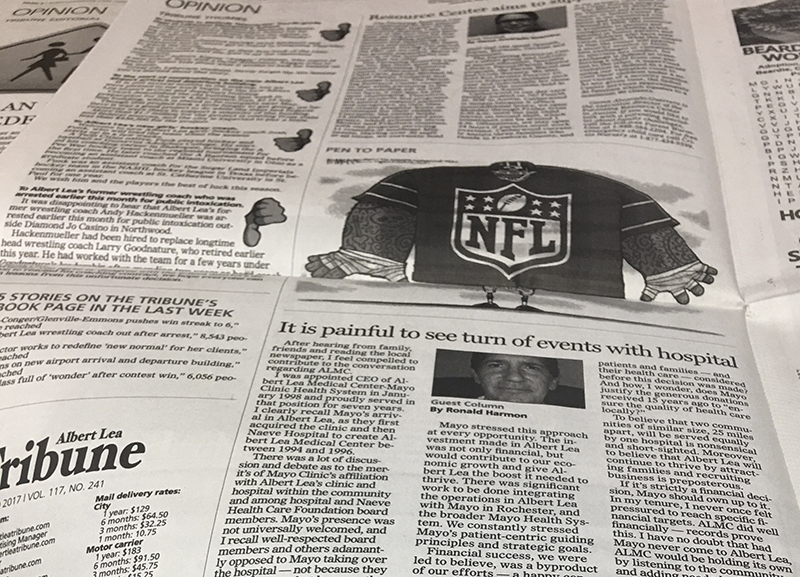 Besides the front page of the newspaper, one of the most read sections in the paper each day and online is the opinion page. People enjoy reading others’ opinions, whether in the forms of columns, letters to the editor or editorials.

The Tribune encourages dialogue in the community and welcomes letters via mail to Letters to the Editor, Albert Lea Tribune, 808 W. Front St., Albert Lea, MN 56007, or via email to letters@albertleatribune.com.

Here are the top 10 most read columns, editorials and letters to the editor from 2017:

1. Guest Column: “It is painful to see turn of events with hospital”

After hearing from family, friends and reading the local newspaper, I feel compelled to contribute to the conversation regarding ALMC.

I have just finished rereading the Tribune articles about Mayo Clinic “consolidating” (moving) services from Albert Lea to Austin. This action generates several emotions, anger, frustration, disappointment, but mostly a feeling of betrayal. I’m sure this is part of a plan laid out several years ago, one that included massive growth of the Mayo central headquarters in Rochester and involves $500 million of state funds.

I am angry because Mayo is our city’s largest employer, and I frankly don’t believe the vague assurances that these moves won’t significantly reduce those numbers. Our hospital has become the heart of our city. Each move they make moves us down an irreversible decline as a city.

3. Letter: “Hospital decision is a blow to Albert Lea”

Albert Lea without a hospital is unacceptable! Like Paul Overgaard, I feel betrayed. Just drafting this letter, I’m getting mad.

This was not a decision made between Albert Lea and Austin medical centers about sharing key equipment and personal, which is reasonable, but a business decision mandated by Mayo corporate to improve profit. My opinion.

Closing the hospital will be a major blow to the community and its economy, sealing Albert Lea’s fate as a second-class city.

4. Letter: “Needs of patients come first — but not in Albert Lea”

A giant medical corporation has decided to close a hospital that serves over 35,000 people so that they can have a free building for their chemical dependency clinic.

Did they consult with the people they had promised to serve?

Did they consult with the expectant mother who has to be rushed over 40 miles to get to a hospital?

The best career I have had in my lifetime is that of mother. There will never be anything I do which will equal my feelings about being a mother.

I wasn’t always the best mother. We don’t have experience when we start, we gain it as we go and unfortunately for our children, at times, they are the testers for our parenting skills.

I have fought with my kids if I saw them making mistakes, especially if they were the same mistakes I made. I wanted to spare them the pain. They have fought with me when they thought I wasn’t doing the right thing in their lives or mine. That’s what families do, they love, they fight and they come together in good times or bad.

6. Letter: “Feelings of an officer’s wife”

By Kari Charboneau, published May 18

I’m sure you’ve heard how much women love a man in uniform, but what does it really feel like to be married to a law enforcement officer? Let me tell you about the emotional roller coaster.

7. Editorial: “Think about the consequences of your words”

This past week, a blog post has been circulating online that was written by a former Albert Lea High School student. It is titled “20 Things You Know to Be True If You’re From Albert Lea, Minnesota.”

The post, the author has since clarified, was intended to be a satirical piece about her hometown that she hoped would make a few of her friends laugh. The post talked about how other students in her classes at the University of Minnesota don’t know where Albert Lea is, how she thinks there aren’t many restaurant options in the city, how new businesses don’t stay around for long and how she thinks the Freeborn County Fair is overpriced, among other comments. She ended the post by saying she didn’t know of a single person her age who wants to stay in Albert Lea.

Don’t believe the spin Ciota and his Rochester cohorts are driveling on about the consolidation of hospital services.

It should be obvious to all why Austin is the big winner.

9. Letter, “Officials went against the people”

Published by Henry Tews, May 24

Nestled above the Iowa border is Freeborn County’s London Township. The residents go about their business, bother nobody, descended from immigrants who fled Europe’s burdensome taxes and government rule, coming to America to live the dream of liberty, and have opportunities according to abilities, not birthright. Settlers were hard-working, self-sufficient and elected church, school, township and county boards who represented their belief in frugality, low taxes, freedom and property rights. Life was good in peaceful London Township.

Until now. Today’s generation living in London Township faces loss of that peaceful way of life, with neighbor against neighbor, division in churches, people not speaking to one another — all because of 500-foot industrial wind turbines (not your grandfather’s windmills) coming near peoples’ homes.

It has been more than a week since Mayo Clinic Health System in Albert Lea and Austin officials announced plans to consolidate most inpatient services to the organization’s Austin campus. With that comes moving the intensive care unit, major surgeries that require overnight hospitalization and childbirth. The change is expected to take place over the next three years.

The behavioral services unit will also move from the Austin campus to the Albert Lea campus, and the changes will require a $25 million investment in total at both locations, much of which will be in Austin.

We at the Tribune were as shocked as the rest of the community to hear the news and arrived at the media briefing June 13 with a page full of questions we hoped to have answered. We had a handful of our questions answered, but unfortunately left the briefing that day with many more. That list continues to grow as time goes on.