Al Batt: At 18 degrees below zero, the Christmas Bird Count was still on 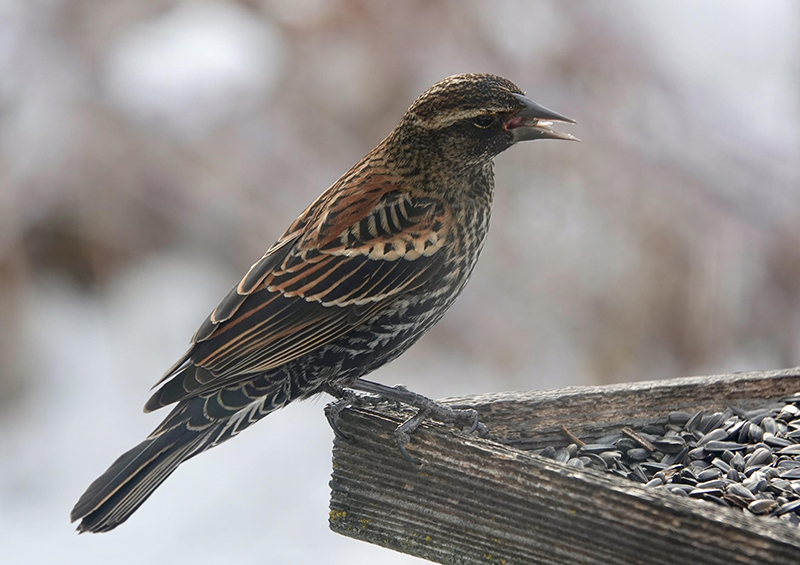 This red-winged blackbird oversleep for the first time in his life, missed a flight and end up stranded in Minnesota. - Al Batt/Albert Lea Tribune

“Everything is nearly copacetic. My New Year’s resolution is to lose weight and to be punctual. I’m doing five laps around the gym every day in January. In February, I may get out of my pickup and walk into the gym. That should take longer than driving around it. I’ve set my clocks 30 minutes ahead so I can get to town before I’ve left home. The weather has been lovely sometimes. I have a beach umbrella over my snowblower. The weather is that uncertain. I’m cleaning my refrigerator, which means I’m polishing off leftovers from the Pleistocene epoch. I should have Weasel help me. He’s a good eater. Weasel gets by on $20 a week.”

“How is that possible?” I say.

What was the first bird you saw in 2018? Mine is often a crow, as it was this year. I’m all right with that.

A coyote ran across the road and I heard a chickadee whistle its song, “I’m cold.”

The tiny red squirrels drive my wife to distraction. She enjoys the company of gray and fox squirrels, but considers red squirrels the cause of most of the world’s problems. She pounds on windows and yells at them when they’re on the feeders. I suspect that was the reason we didn’t get a single Christmas card from a red squirrel this year.

I watched white-breasted nuthatches fly onto my mother-in-law’s feeders and carry sunflower seeds to a nearby tree where they wedged the seeds into crevices in the bark that eased the process of opening the shells. The nuthatch gets its name from its habit of pecking seeds or nuts jammed into bark with its sharp bill to “hatch” the edible parts.

I’ve considered trying that with pistachios. Some of those nuts prove difficult for a thumbnail to open.

To chill a mockingbird

J.R.R. Tolkien said, “Not all those who wander are lost.”

Tolkien must have done a Christmas Bird Count, where things such as leaves, clumps and clods look more like birds than birds.

The idiot light indicating low tire pressure refused to disappear from my car’s dashboard although the tires had been checked and not found wanting air. It was 18 degrees below zero. I went walking around outside counting birds. My personal idiot light was on, too. I do several CBCs each year. Rituals are important, so I count birds with an idiotic verve. I hoped a rickety day would turn into a bird-studded one. The cold, snow and binoculars presented a cartoonish scene similar to the video a friend, Sparky Stensaas of Wrenshall, Minnesota, made wherein he used a frozen banana to pound a nail into a board at 25 below.

I hadn’t walked long before a friend questioned my sanity, “Are you nuts?” He’s a caring guy who was gobsmacked. He wondered how I could count birds, as they weren’t numbered or wearing name tags. I told him that when it came to counting birds at 18 degrees below zero, I could take it or leave it, but I’d much rather take it. I counted without a whimper. Stoicism is a classic Minnesotan attribute. I was properly attired, so I didn’t shiver like a Chihuahua displaying a keen awareness of the tenuous world situation.

Not all birds want to be counted. They are happy to remain shrouded in a veil of anonymity. I was taken with a lovely red-winged blackbird I encountered. I thought of “Thirteen Ways of Looking at a Blackbird” by the poet Wallace Stevens. “It was evening all afternoon. It was snowing and it was going to snow. The blackbird sat in the cedar-limbs.“ I’m not sure what that means, but I like it. I consider each bird to be a feathered jewel. Steve Houdek of Onalaska, Wisconsin, told me, “There’s always a gold nugget in every birding day; one just needs to find it.”

Watching birds and counting birds go together. We like things that can be measured. When I read a book, it has page numbers. I count birds because I’m still trying to figure things out.

A couple of friends, Terry Taylor and Peter Mattson saw a pot-bellied pig ranging free during the Austin CBC. I saw several black squirrels (melanistic gray squirrels) and that made me happy.

Do I have any advice for those doing a Christmas Bird Count at 18 below zero? I do. Keep your hat on.

“Logic will get you from A to B. Imagination will take you everywhere.” — Albert Einstein