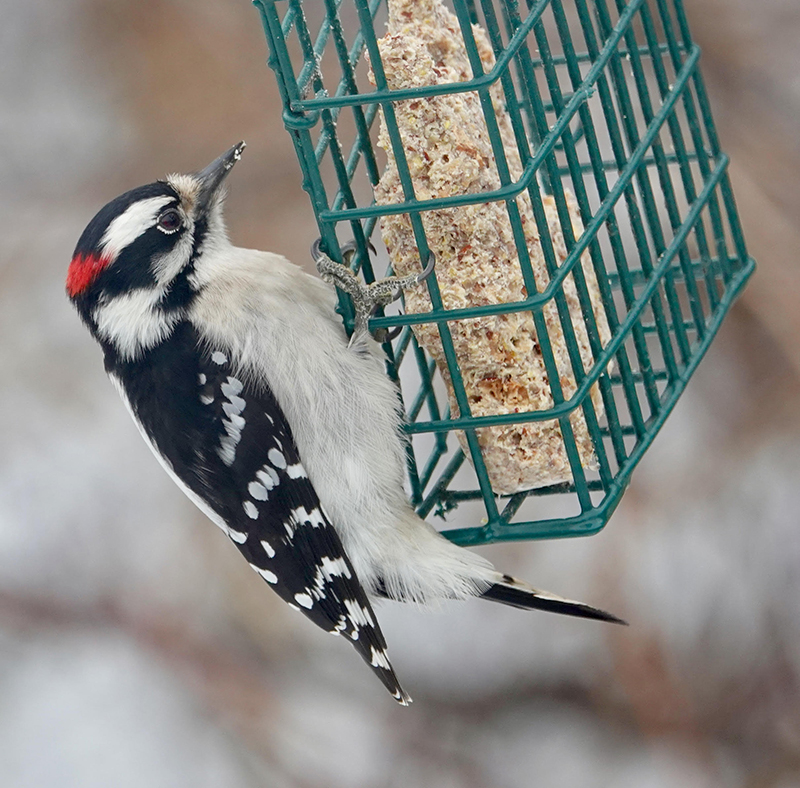 The downy woodpecker has a short bill in comparison to its head. - Al Batt/Albert Lea Tribune

“Everything is nearly copacetic. I didn’t listen to the weather report today because I like surprises. I’m leaving my truck’s left turn signal on in protest of the people using cellphones while driving. My sister Cruella is moving and asked if I’d help her move. She wanted me to move her waterbed filled because she didn’t know if the water in her new home would be as soft. I told her that bed weighed 1,200 pounds.“

“She said she’d help me carry it.”

The snow squeaked underfoot. That happens when the temperatures fall below 14 degrees, give or take a smidgen.

Sundogs, also called mock suns, phantom suns or solar parhelia graced the sky. Parhelia is a Greek word meaning “beside the sun.” Sundogs form as sunlight is bent (refracted) by ice crystals suspended in the atmosphere. In medieval times, the three bright lights were interpreted as a sign of the trinity and as a sign of great fortune. They were signs that I was lucky to see. When I was a boy, a neighbor, upon seeing sundogs, declared, “Tonight will be clear as a bell and cold as hell.”

I watched a Cooper’s hawk chase a starling across the road.

Roadside birds were apparent on a blustery winter day. Small flying things fascinate me. These were beguiling birds come to roadsides to feed on days with cold winds that stung my flesh. Tiny birds in the forms of dark-eyed juncos and American tree sparrows. Lapland longspurs that insisted in moving across the road in front of cars as if they were feathered squirrels. Horned larks moved from the road into the fields when a car neared. Snow buntings moved away from the road, but often seemed intent on racing vehicles. Snow buntings nest farther north than any other land bird and will bury themselves in the snow for warmth.

I may be accused of being dangerously quixotic, but it happens when I take the time to notice nature. That’s not a sacrifice on my part. Wherever I looked, there was something beautiful looking back at me.

“How many bald eagles nest in Minnesota?” I don’t believe there has been a survey of nests in Minnesota recently. There were 1,300 active nests in 2005, but there are many more now. Lori Naumann, of the nongame wildlife program of the DNR said Minnesota has about 9,800 pairs of bald eagles.

“Why were there canaries in the mines?” It wasn’t because they were handy with picks. I visit a loved one regularly who resides in a nursing home. I also visit the aviary located there. It includes beautiful singing canaries among its birds. A mining tradition dating back to 1911 was the use of canaries in coal mines to detect carbon monoxide and other toxic gases. If a canary stopped singing, became ill or died, it gave miners a warning. This practice ended in 1986 with the introductions of more modern technology.

“You’ve mentioned the Wildlife Rehabilitation Center in Roseville. What percent of the animals taken there are due to injuries from encounters with pets?” Phil Jenni, executive director of the WRC, said about 12 percent of the injuries that WRC treats each year are the result of domestic animal

“What is the most beautiful bird in the world?” The one you are looking at. Beauty is in the eye of the bird looker.

“What’s going on with Freeborn Lake?” The drawdown on Freeborn Lake means to improve water quality and waterfowl habitat, while removing rough fish, especially common carp, that hamper the growth of aquatic plants. A new culvert installed on County Highway 6 and the Cobb River will provide a passive barrier preventing carp from re-entering the lake. Water levels are lowered to enable construction of a dam and to encourage plant growth. When water levels return to normal, the DNR will restock the lake with fish like northern pike and yellow perch. The Outdoor Heritage Fund provided funding.

The GBBC is Feb. 16-19. Count birds for at least 15 minutes on one or more days of the GBBC. For more information, go to gbbc.birdcount.org.

“Plenty of people miss their share of happiness, not because they never found it, but because they didn’t stop to enjoy it.“ — William Feather

“Heaven is under our feet as well as over our heads.” — Henry David Thoreau