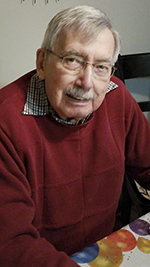 He graduated from Albert Lea High School in 1948. He served in the Army for seven years and was stationed much of that time in Alaska. After serving in the Army he attended Iowa State University and the University of Minnesota, before beginning his 34 year career with Honeywell in 1957. He worked and lived in the Twin Cities until he retired in 1992 to their lake home in Clitherall.

Arlen was baptized in the Lutheran faith and was a member of Nidaros Lutheran Church, where he served on the council. He was a long time member of the Lions at Spring Lake Park and Battle Lake, where he served on the board of directors. He also served on the board of the Clitherall Lake Association, was one of the first radio talking book announcers reading the Fergus Falls area news for the blind and was a long-time member of the American Legion. Arlen’s special interests were his family, home, garden, workshop and computer, as well as living on Clitherall Lake.

He is preceded in death by both parents; sons Rodger and Kent; and daughter, Mary Kay Peterson.

A memorial service will take place at 11 a.m. Jan. 27 with visitation one hour prior at Zion Lutheran Church at 1601 Fourth Ave. in Anoka.