Snow welcomed by certain small members of the animal kingdom 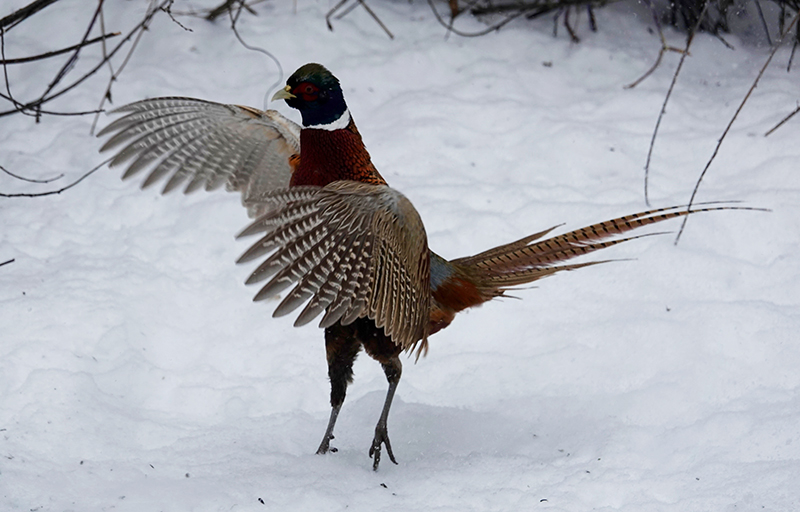 A ring-necked pheasant, one of the five golden rings of the 12 Days of Christmas. Al Batt/Albert Lea Tribune

“Everything is nearly copacetic. I don’t think my refrigerator is keeping things cold enough. But that’s just water under the fridge. The holidays are a magical time. It made all of my money disappear, but my annual tradition of eating chocolate cake with ketchup on it keeps me going. It also causes my fitness tracker to send an ambulance to my house. My brother Chuckles was in mismanagement for some big financial company before deciding to follow his pipe dream. That’s why he’s a plumber. He gave me a huge angel food cake. I’m eating all the cake that I’m able. I need to put on some winter weight. I know that I am properly insulated when my abs turn into flabs.”

The end of December brought the sounds of woodpeckers drumming on resonant wood to declare their territories. Listen for chickadees singing “fee-bee,” another sign of the days becoming longer. Increasing daylight causes the blue jay to sound its pump-handle call, sometimes called the “spelunker” call. I’ve been hearing the hooting courtship calls of great horned owls in the night. The calls are deep, soft hoots with a stuttering rhythm, “hoo-h’HOO-hoo-hoo.” The female is larger than her mate, but the male has the deeper voice.

I watched a northern harrier (once called a marsh hawk) hunt on the wing, coursing in a wobbly manner low over the ground. It was likely searching for voles. Unlike other hawks, it relies on a sense of hearing as well as vision to capture prey. The northern harrier is a long-tailed hawk with a white rump patch. It nests on the ground.

It was cold. I tossed out an ear of corn and a fox squirrel picked it up and bounded away through the snow. That made me happy in a way that defied explanation. Each day brings a richness and a newness.

Snow fell. I could almost hear a miniature world applauding. Animals can’t let snow keep them from getting to work. The subnivean zone is the area between the surface of the ground and the bottom of the snowpack. The word subnivean means under the snow. Mice, voles   and shrews retreat there for protection from cold temperatures and predators. At a time when food is scarce, it’s available in that humid habitat with grass, leaves, seeds, bark and insects on the menu. Below the snow, tiny mammals create long tunnel systems. Six inches of snow acts as a sturdy roof over generous living quarters and provides relatively stable temperatures around 32 degrees regardless of the air temperature.

Because of their extraordinarily fast metabolic rate, shrews must feed voraciously. The saliva of the short-tailed shrew is venomous and its bite can subdue or kill larger prey such as mice and voles. Shrews also feed upon beetles, centipedes, earthworms, snails, slugs, spiders, fungi and vegetable matter.

A small flock of horned larks and a rooster pheasant fed on the road not far from our mailbox. Horned larks are social birds that feed on open ground like roadsides. They prefer fields with short or little vegetation. A horned lark is roughly the same color and size as a clod of dirt. It has a lovely pale yellow face with a black mask, cap, ear tufts (horns) and tail. It’s rusty brown above with white underparts. From late winter into summer, I hear their high-pitched, thin, tinkling songs, often given in flight. They forage for food on bare ground, feeding on insects, spiders, snails, berries, fruits and seeds. The birds bring a beauty to blustery winter days.

“How is it determined when a lake has become iced in?” Ice-in can be difficult to determine. It occurs when a lake is completely or nearly covered (90 percent) with ice. A lake can freeze and thaw multiple times.

“Do barred owls migrate?” Barred owls not only don’t migrate, they seldom travel far from home. They eat voles, rabbits, mice, squirrels, chipmunks, birds, amphibians, reptiles and fish. Many kind readers have sent me photos of barred owls perched upon shepherd’s hooks or other posts holding bird feeders. This owl hunts from elevated perches, using its sight and hearing to scan for prey. They swallow small prey whole and large prey in pieces, typically eating the head first. They will cache prey to eat later.

“What is the most numerous bird in the world?” It’s probably the domestic chicken.

“What kind of a bird is a gawker?” It’s a rarely heard nickname for the northern flicker. I suspect it was given in order to imitate the bird’s call. Other nicknames include: Yellowhammer, high-holer, gaffer woodpecker, harry-wicket, heigh-ho, wake-up, walk-up, wick-up, yarrup and cottontail.

Look for snow that blinks

Jamie Tenneson and her son, Friederich, of Clarks Grove  spotted a snowy owl near Highway 26 between Hayward and Hollandale. Brandon Kroeger of New Richland has been seeing a snowy owl west of that fine city.

“We are nature. We are nature seeing nature. The red-winged blackbird flies in us.” — Susan Griffin

“Whenever you fall, pick something up.“ — Oswald Avery