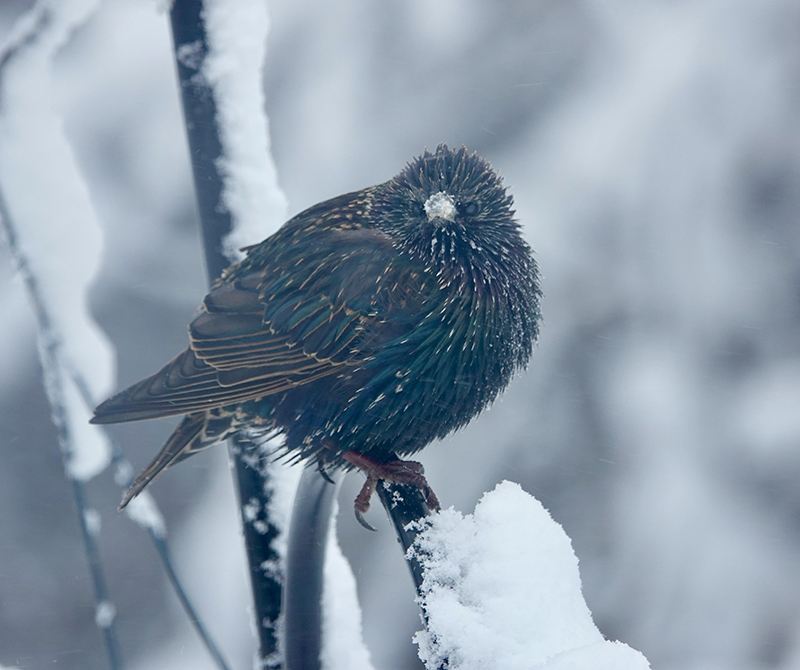 Winter can wear both starlings and humans to a frazzle. - Al Batt/Albert Lea Tribune

“Everything is nearly copacetic. Scooter got all excited about seeing a beaver in his pond. It was a muskrat. I told him not to mistake a muskrat for someone that builds a dam. Scooter had been employed by a printing company for umpteen years, but they closed the plant he worked at. I went to a job fair with him, but the rides were terrible. Speaking of rides, I remember our school bus driver who always went that extra mile. By the time he let me out of the bus each day, I had to walk a mile just to get back to my driveway. I was over at my sister Cruella’s new home. I hoped to age like a fine wine, but I’m aging like bread. So I was down in the basement using her exercise bike. Now Cruella is smart. She crammed four years of college education into just nine years, but she’s still five-fourths my sister. I was pedaling and sweating when she asked me, ‘How far from home are you? I need to know when to start dinner.’”

Birds rest gentle on my mind

I heard a great horned owl pair hooting. It was a nifty duet. He said, “I eat skunks.”

I saw a pileated woodpecker. It was a male. The male has a red forehead and mustache. Those are black on a female.

I moved through the 13 to 40 inches of hard snow like a snail with rheumatism. I thought of a day years ago when I’d visited an aunt and uncle in Iowa when similar precipitation covered the ground. Their neighbor was feeding the birds with an odd feeder. She’d stuck a plunger handle first in the snow. I was taken with the ingenuity, but hoped the plunger was a new one.

A real estate agent in England got an unpleasant surprise when he returned home from a five-week vacation. He had trouble shifting his Volkswagen Golf. While cleaning the car before taking it to a repair shop, he found the glove box full of acorns. Squirrels had used the car to stash acorns for winter. The engine bay and transmission assembly were stuffed with acorns, causing the car to shift improperly. He paid $200 on an invoice that read, “To remove acorns from gearbox linkage housing and dead rat from soundproofing.”

One year, a squirrel tried filling the box of my pickup with walnuts. The animal was dropping the nuts through a vent on the roof. It probably thought the vent was holding a massive  amount of walnuts, but they were dropping onto my parked truck.

“What’s the world’s fastest-swimming bird?” The gentoo penguin is the avian gold medalist. It can swim 22 miles per hour.

“What’s the bird I heard in the old Tarzan movies?” The voice is that of a kookaburra, a hefty member of the kingfisher family. The calls were ill-suited, as the kookaburra is an Australian bird. The bird’s call was a stock background noise. It was in an episode of “The Twilight Zone” and in “The Wizard of Oz,“ a kookaburra can be heard in the forest. It earned the nickname “Bushman’s clock” because of its habit of calling in the morning and evening. Their call sounds like loud, demented laughter. It goes something like this, feel free to sing along, “who-who-who-ah-ah-ah-ah-HA-HA.”

“How do I see a snowy owl?” Look for one. Snowy owls prefer treeless, open spaces. They often sit on the ground to hunt, so rolling terrain offering a vantage point to survey the surrounding area is to their liking. They perch atop buildings, fenceposts, grain elevators, hay bales, utility poles and other places offering good views. I’ve found it easy to turn a white plastic bag into a snowy owl. Snowy owls are seen at MSP Airport every year sometime between Thanksgiving and Easter. It’s tundra to them. How does a snowy decide where to settle down for the winter? It likely has to do with food. Competition might be another factor. Researchers have found most visiting snowy owls healthy, with normal weight and fat reserves. Adult males have a nearly pure white plumage and adult females are white with brown barring. Females are larger than males. Young males resemble adult females, but with more spotting on their flight feathers. Some wintering owls do perish, succumbing to vehicle or plane collisions, rodenticide poisoning, power line electrocution and other hazards unnatural to them. I hope a snowy owl finds you. Good luck.

“Take a quiet walk with mother nature. It will nurture your mind, body and soul.“ – Anthony Douglas Williams