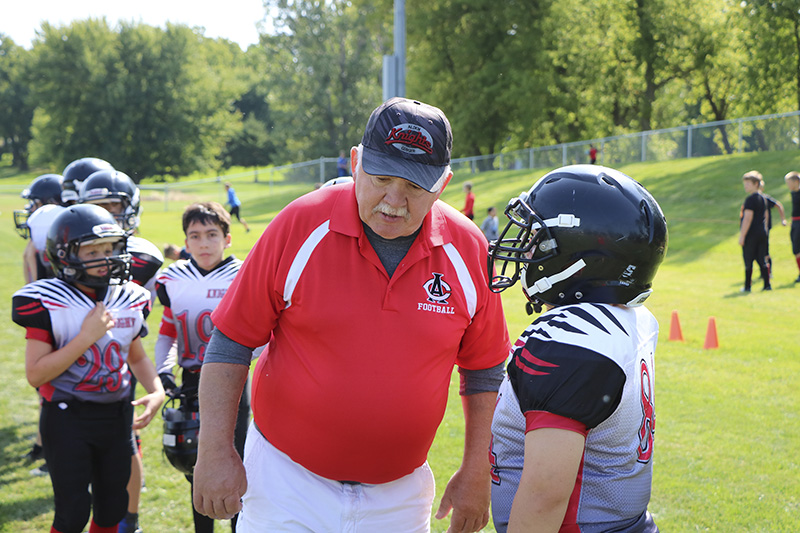 Faron Bremseth listens to a player during a 2017 game. Bremseth has been coaching third- through sixth-graders for 20 years now. Provided

ALDEN — If each child he has coached counted as a yard line, the Black Thunder football program’s coach would have crossed football fields by now.

Instead, after starting the program, Faron Bremseth has spent that time on the sidelines, coaching first his son — and then other people’s sons and daughters — through almost 20 years worth of tackles, blocks, runs and kicks.

“Faron obviously, you know, cares a lot about the kids,” former participant Mitchell Kleinschrodt said. “You can tell, you know, it’s a really good program, and what he’s been able to turn it into, you know, was pretty amazing. It started with an idea and just kind of snowballed into what it is now.”

Including some of the other sports he has worked with, Bremseth said he has been coaching since 1981. He started the Black Thunder football program when he saw a need for it in his own household.

“I had a son at that time in that age group,” Bremseth said. Albert Lea had a program, but it was only for fifth- and sixth-graders.

That first year, he already had between 40 and 50 participants turning up to join the third- through sixth-grade teams. According to Bremseth, the numbers have stayed consistent. The largest group he has worked with has been 82 children. 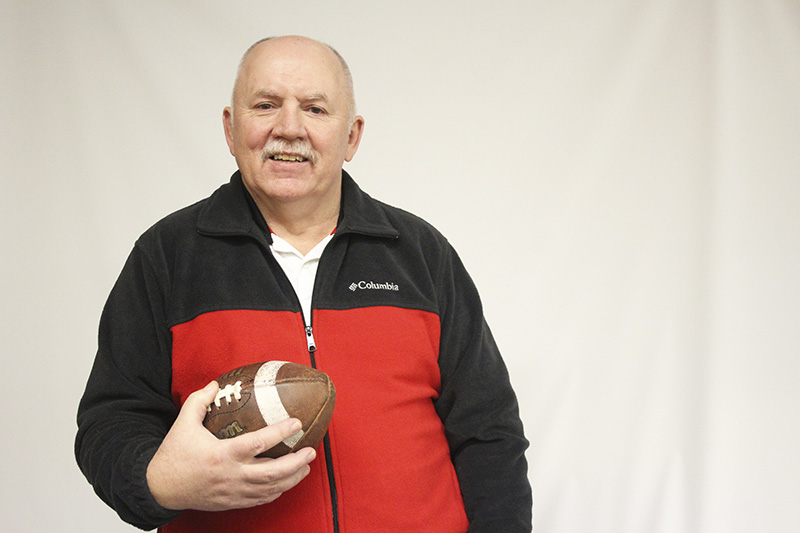 Faron Bremseth said one of his favorite thing to see in his young football players is the lightbulb moment: that instance in which a play or a tactic suddenly clicks. Sarah Kocher/Albert Lea Tribune

In the fall, he spends approximately 10 hours a week coaching all the grades as part of Black Thunder in Alden. They do warm-ups and calisthenics; then they break up into position groups.

“That’s something I really stress, though, among the kids,” Bremseth said. “I don’t care if you’re a good back. You should learn how to do these other positions, too, so you learn what these other kids gotta do to help you out.”

“I don’t turn any kids away,” Bremseth said. “If you want to drive down, come on down.”

This is one of the reasons the football program hasn’t taken the Alden-Conger Knights mascot: so that children from different areas feel like they can own the program, too.

From the pool of participants, Bremseth said he has seen about half go on to play high school football. One such participant was Kleinschrodt, now an assistant coach and offensive coordinator at the University of Upper Iowa.

“I think to light that passion early, the youth football program was a bridge for me to kind of carry that passion from second grade to junior high,” Kleinschrodt said. He could have gotten into basketball or baseball or hockey. He could have picked up a different hobby entirely.

But he didn’t. Instead, he joined the Black Thunder in 1998 for the program’s first year.

“I think it was a really great introduction for young students who grew up going to high school football and growing up watching it on TV … to implement it for themselves,” Kleinschrodt said.

In the past, Kleinschrodt has returned to Alden to help Bremseth with football camps.

“I always like to come back and give back as much as I can, but I’m doing it because I know Faron had a really big influence in helping me get where I am,” he said.

Bremseth said one of the biggest unexpected things about the program is how long he has stuck with it. The children keep him young at heart, he said.

Plus, he gets to see the moment it all comes together for the children he works with.

“Just watching the kids when that light goes on … you work and work with them and then they get it,” Bremseth said. “That’s the biggest thing … is watching them just get it.”

With the Black Thunder football program, they’re having a chance at those lightbulb moments earlier than some other children, as well, because they’re getting a chance at football earlier, too, Neel said.

But on top of all of that, it’s another opportunity to have some fun. Neel’s favorite memory from his time coaching was watching the participants get a chance to play at the Minneapolis Metrodome.

“I don’t know who had more fun — the coaches or the kids,” Neel said.

And when there’s a loss on the field, sometimes coaches and parents can take a lesson from the team, Bremseth said. They keep perspective.

“The kids are back out playing football after the game,” Bremseth said.

82 – The largest group of children playing for Black Thunder