Memorial services for Evan D. Long of Superior, Wisconsin, formerly of Albert Lea, will be at 4 p.m. Sunday at Bonnerup Funeral Service, 2210 E. Main St. in Albert Lea. Friends may visit with family from 2 to 4 p.m. Sunday at the funeral home. 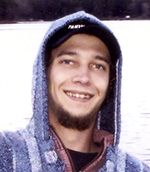 Evan was born Oct. 19, 1987, in Albert Lea, the son of David Long and Vicki Brua Evans. He attended shool in Albert Lea and will be remembered as a talented goalie for the Tigers hockey team.

He took up the trade of drywaller and painter, doing many large jobs in the Albert Lea area.

On June 28, 2014, Evan married Sarah N. Haukoos at Harmony Park in Geneva. In fall of that year, the couple moved from Albert Lea, making their home in Superior.

To Evan, family was everything and his “three girls” trumped all things in his life. He loved to be active and enjoyed fishing, softball, pool, camping, festivaling and riding dirt bike, and he continued to play hockey in the Duluth/Superior men’s leagues and in the Tigers all-years reunion hockey games.

Evan is survived by his wife, Sarah, and daughters Nichole and Addison; his father, David Long Jr., and mother, Vicki Evans, and JB Evans of Albert Lea; his sister, Stacia Donovan, and Scott Waxvik and their children Jazzelle, Dessa, Aria, Cole and Silas of Duluth; stepbrother, Brandon, and Amanda Evans and children Ashlyn, Mallory, Kaylee and Shelby; grandparents Dave and Elaine Long of Albert Lea; in-laws Mary and John Stevens of Albert Lea, Greg Haukoos of Walters, Benjamin Haukoos and his children Jacob and Ava, Samantha Haukoos and Josh Brown of Walters and their children Lennix and Trevor; many aunts, uncles and cousins; and his Harmony Park family.

He was preceded in death by his grandmother, Clarine Brua Larson.

In lieu of flowers, memorials are suggested to the family.

Thoughts of Evan always put smiles on their faces. He was a quick-witted, gentle soul who will live in their hearts forever.