Memorial services for Jeffrey S. Poole will be at 2 p.m. Sunday at First Presbyterian Church in Albert Lea. The Rev. Dwight Netzer will officiate. Visitation will take place one hour prior to the service and a burial will happen in the spring at Graceland Cemetery. 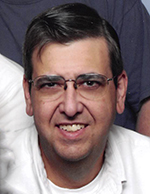 Jeffrey passed away Tuesday, Feb. 13, 2018, at St. Marys Hospital in Rochester surrounded by his family. He was 51.

Jeffrey Scott Poole was born Aug. 21, 1966, in Albert Lea to James and Janet (Hahlen) Poole. He graduated from Albert Lea High School in 1984. Jeff would go to college at Brown Institute in Minneapolis for a year. He began working in television at KSMQ in Austin, where we worked until 1990. He would then move to Mason City, where he worked for KIMT until 1999. His work would take him to Atlanta, where he would work at CNN as a master controller until 2012, where he would move back to Albert Lea and would be employed by KIMT and Diamond Jo Casino.

Jeff was a member of First Presbyterian Church, and was also a member of the Eagles Club. He enjoyed music, reading, golf and watching sports. He was well versed in politics, and always up-to-date on current events. Family was very important to Jeff and having a wonderful relationship with Tyler will always be cherished by Jeff.

He is preceded in death by his mother, Janet; grandparents Louis (Elvina) Hahlen and Garwin (Evelyn) Paulsen; and many aunts and uncles.