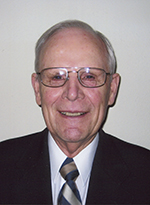 A Mass of Christian burial will be at 10:30 a.m. today at Epiphany Parish-Holy Family Catholic Church, 714 N. Adams Ave. The Rev. Neil Manternach will officiate. Burial will be in Elmwood-St. Joseph Cemetery in Mason City. Visitation was from 5 to 7 p.m. Thursday at Hogan-Bremer-Moore Colonial Chapel, 126 Third St. NE in Mason City. A Rosary will be recited at 7 p.m. followed by a scriptural wake service.

The family suggests memorials be directed to Hawkeye Harvest Food Bank or Hospice of North Iowa.

Bill was born Nov. 30, 1925, in rural Wright County, the son of William Dewey and Hanna Jane (Myers) Moore. He grew up around Dows, moved to rural Geneva in 1941 and graduated from Geneva High School in 1943. Awaiting the draft, he worked for the Dairy Herd Improvement Association in Butler and Bremer counties, staying with the dairy farmers for the balance of 1943.

On Jan. 1, 1944, at the age of 18, he was drafted into the United States Army as an infantryman, serving in the Third Army in Europe. He was home on leave when Japan surrendered in 1945. He then served in easier assignments stateside in Colorado Springs and Salt Lake City. After an honorable discharge, he took advantage of the GI Bill and graduated from Upper Iowa College in 1950. In 1967, Bill obtained his masters degree from Drake University. He began his teaching career in Swaledale, where he met the love of his life, Mary Chambers. They were married June 30, 1951, at Sacred Heart Church in Fort Dodge, Iowa. They spent 64 wonderful years together.

He continued his teaching career, teaching English, drama and speech in Gilmore City, Perry and Des Moines, as well as Roosevelt Junior High School and Mason City High School in Mason City. He retired in 1987 after 37 years on the job.

Upon retirement, Bill took up volunteer work, spending seven years with Hospice of North Iowa and 30 years each with Hawkeye Harvest Food Bank, including service on the board of directors, and in the Mercy surgery waiting room. In his spare time he enjoyed reading, doing crossword puzzles and eating pie. Bill was a very social person and put that trait to work in his volunteer work, as well as his time living at Kentucky Ridge and Good Shepherd.

Bill was preceded in death by his wife of 64 years, Mary; one son, Joseph Edward; his parents William and Hanna Jane; siblings Dorothy Trafford, Richard, Eldon and Jerry Moore; and his grandson, Ryan Michael Moore.

Bill’s family would like to thank the staff of Kentucky Ridge, Good Shepherd and Hospice of North Iowa for their care of Bill.