Carolyn Charlotte (Heitner) Hemingway, 96, of East Palo Alto, California, formerly of Waverly, Iowa, died Monday, Feb. 26, 2018, at her home. A funeral service will be at 11 a.m. Tuesday at Bruss-Heitner Funeral Home in Wells. The Rev. Mary Iverson will officiate. Visitation will be one hour prior to the service at the funeral home. Interment will be at Rosehill Cemetery in Wells. Bruss-Heitner Funeral Home in Wells is assisting the family. To leave an online condolence, visit www.brussheitner.com. 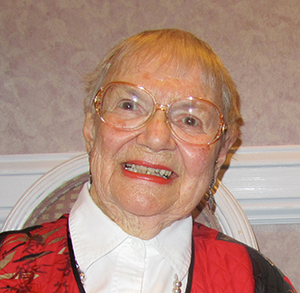 Carolyn Charlotte was born May 8, 1921, in Mankato, the daughter of William Arthur and Erna S. (Scheider) Heitner. She was baptized May 22, 1921, and began kindergarten in Mankato. At the age of 6, she moved with her family to Preston, where her parents had purchased the funeral home. She was confirmed June 9, 1935, at St. Paul American Lutheran Church in Preston. Carolyn graduated in 1938 from Preston High School. She went on to attend Wartburg College in Waverly, Iowa, where she took a one year business course. She then worked as a secretary for Lutheran Mutual Life Insurance Co. in Waverly.

was serving as a dentist for the U.S. Army during World War II, and Carolyn moved with him from base to base, until returning to Preston for the duration of the war. In 1944, their son John H. was born. Following her husband’s discharge, the family settled in Waverly, where John opened his dental practice, and Carolyn raised their son and cared for their home. In the early 1960s she went to work for N.W. Herman Home Interiors in Waverly until 1980. She then worked as a secretary for Wartburg College, and the city of Waverly until moving to California.

Carolyn is preceded in death by her parents; husband, John; and sister-in-law, Betty Heitner.