Clark D. Jensen of Freeborn lost his hard-fought battle with cancer Saturday, March 10, 2018, at St. Francis Medical Center in Shakopee. He died the way he lived, surrounded by his loving family. He was 77.

Memorial services for Clark will be at 2 p.m. Saturday at the Bonnerup Funeral Service chapel in Albert Lea. Visitation will be one hour prior to the service at the chapel. The service will be officiated by Scott Jensen, Clark’s nephew. In addition, Clark’s military service will be recognized with military honors. Interment at Freeborn Cemetery will be at a later date with his family. 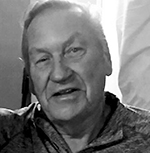 Clark was born May 23, 1940, in Mallard, Iowa, the son of Ejnar (Joe) Jensen and Anna (Falkert) Jensen. He graduated from Mallard High School and immediately joined the U.S. Navy. He proudly served his country aboard an aircraft carrier as an aviation electronics technician. He was united in marriage to Wanda L. Wood and blessed with five children: Sheldon, Robin, Melissa, Eric and Lori. He later wed Nancy Johannsen, who brought three children to the marriage: Melissa, Rhonda and Brett.

Clark well understood the value of hard work. He grew up on a farm, later trained as a welder and owned his own business. He started working on job sites pushing buggies of concrete up makeshift ramps, and within a few years he was the site superintendent, responsible for building multi-million dollar feed mills all over the U.S. and Canada. He was widely recognized in his industry, achieving numerous awards and respect by colleagues and workers.

Clark was a member of Freeborn Congregational Church, Veterans of Foreign Wars, National Rifle Association, Freeborn American Legion, Studebaker Club and Alcoholics Anonymous for over 33 years. He was an active American Red Cross volunteer and traveled wherever needed, whether it was to assist with cleanup efforts after Hurricane Katrina on the Gulf Coast or in southern Minnesota after a tornado touchdown. His passions included baseball and football, old cars  — mainly Studebakers, creative tinkering — he could fix anything if you gave him a little time in the green shed — and had a love for gardening and canning at the cabin. He was a better listener than a talker, humble and a friend to all. His family and grandchildren were the light of his life, and they will miss him beyond measure.