Funeral services for Frances Marcia Blakestad, 89, of Albert Lea will be at 11 a.m. Tuesday at St. Theodore Catholic Church with a Rosary at 10 a.m. The Rev. Kurt Farrell will officiate. Interment will be at Fairview Cemetery in Hayfield at 1:45 p.m. Tuesday. Visitation will be from 5 to 7:30 p.m. Monday at Bayview/Freeborn Funeral Home and from 10 a.m. until the start of the service at the church Tuesday. Online condolences are welcome at www.bayviewfuneral.com. 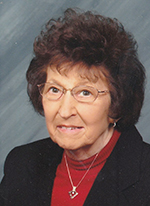 Frances Marcia Blakestad was born Dec. 27, 1928, in Owatonna, the daughter of Joseph and Dorothy (Houdek) Renchin. She grew up near Hayfield and graduated from Hayfield High School. After graduation she attended beauty school.

On Dec. 27, 1952, she was united in marriage to Roger Blakestad at St. Theodore. To this union, three daughters were born.

Fran worked as a beautician for 69 continuous years at various nursing homes and a shop in her basement until the time of her passing.

She was a member of St. Theodore, where she had been active in guild, and a past member of the Eagles. Fran loved the outdoors — especially her flowers and gardening, cleaning her home, reading and solving puzzles.