Gloria Hareid, 72, passed away Monday, March 12, 2018, at her home in Surprise, Arizona, after a brief struggle with gastric cancer.

Gloria was born March 19, 1945, in Austin to parents Robert and Lillian Larkin. She graduated from Pacelli High School in 1963. While a student at Austin Community College, she met the love of her life, Bill Hareid. Bill and Gloria enjoyed 52 years of marriage while raising two daughters and being blessed with nine grandchildren. 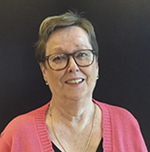 Earlier in her life, Gloria served on the Albert Lea Planning and Zoning Committee, was a Sunday school teacher at First Lutheran Church and president of Albert Lea Mrs. Jaycees. She was also a 25-year employee of Riverland Community College, working in student services.

Gloria was an avid golfer and could be found on Green Lea Golf Course with friends or Bill most every summer day. Following retirement in 2005, it was the love of the outdoors and the dislike of winter that prompted Gloria and Bill to move to Surprise, where they could play golf every day of the year. She also loved playing cards and games with her friends — especially Words With Friends on her beloved iPad. She was also an avid reader. Gloria’s absolute favorite pastime was spending time with family and following her grandchildren’s activities with some appropriate bragging.

Gloria was preceded in death by her parents, grandparents and sister, Annette Nover.

In accordance with Gloria’s wishes, no funeral service will take place and she will be buried at a later date at Lakewood Cemetery in Albert Lea. A private family celebration of Gloria’s life will take place in the near future.