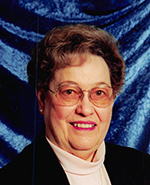 Dorothy passed away surrounded by many of her loved ones Monday, April 9, 2018. She was 91.

She was the youngest of seven children, with six older brothers. She graduated from Albert Lea High School in 1944 and proudly worked on its many class reunions.

Prior to her marriage, she worked at the telephone office and DeSoto Produce. As her kids were growing, she worked in the office at Jim & Dude’s Plumbing as well as being the assistant manager at Roadrunner Self-Service Gas Station.

Dorothy enjoyed each and every holiday, and she would decorate her front bay window for the holiday or season. She enjoyed spending time with her many friends and going for Sunday rides around the community and the county. She especially enjoyed time spent with her grandchildren and her great-grandchildren.