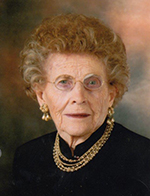 Elnora was born Jan. 1, 1920, in Hayward to Knute and Ellen Fretheim Wangen, who preceded her in death.

She was married to the late Herbert A. Krueger on Oct. 20, 1937, in Nashua, Iowa, at The Little Brown Church. Elnora attended Bell School in Freeborn County. She enjoyed traveling, playing cards and reading. She was an active member of St. Paul’s Lutheran Church in Fulton. She served in the ladies aid, taught Sunday school and adult Bible study classes and sang in the choir.

She was also preceded in death by brothers Omer, Ivan, Luther and Robert Wangen; and sisters Gladys Sanders and Benetta Iverson.

In lieu of flowers, memorial contributions may be made to Old Auxvasse Cemetery in care of Debo Funeral Home, 833 Court St., Fulton, Missouri 65251.