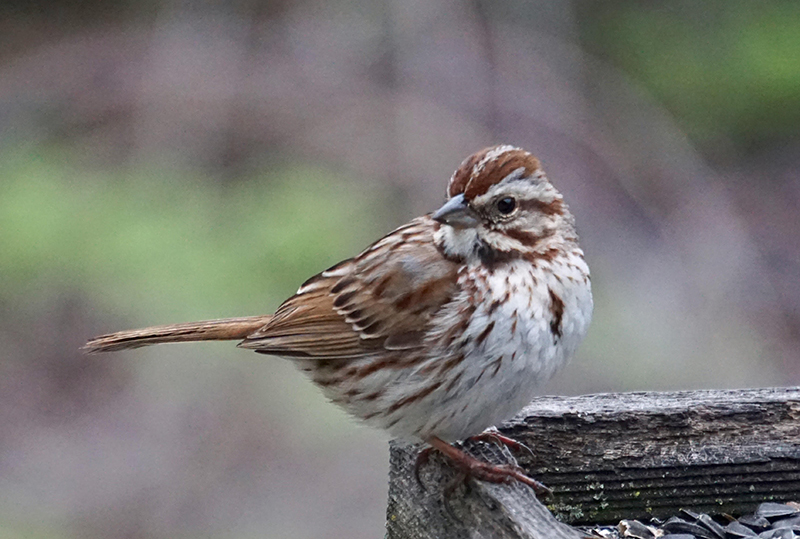 “Everything is nearly copacetic. Pop flew back from Texas. He has only flown once before and that involved a goat that caught him by surprise. I remember when Pop invented nonskid peanut butter. He opened his wallet and once the moths saw daylight it was fool speed ahead as he opened a store selling the stuff. People bought everything he produced and darn near bankrupted him. He was on the skids with the nonskid toast topping. The stuff refused to skid through a digestive system. Yo-Yo Yohnson at Bank On Us had to loan Pop enough money to have a going out of business sale. Speaking of Yo-Yo, I asked him to change a $20 bill for me. He drew a mustache on Andrew Jackson’s face.”

Robins, while not noted for being seed eaters, were eating sunflower hearts that had fallen to the ground. They were worm replacers.

I enjoy seeing a song sparrow, a lovely presentation of a bird. Every garden has one. A garden gets two for the price of one, both the song sparrow and its song. They breed in all of Minnesota and Iowa, and are found in every state except Hawaii.

Red means to stop and look when it’s at an intersection or on a cardinal. Both the male and female redbirds are a picture of sartorial perfection.

Every week, I hear several people mention that they miss seeing meadowlarks.

I recall the days when the world paused while we all gathered and watched ”The Wizard of Oz” on TV. One of my parents’ favorite publications was “Capper’s Weekly” published in Topeka, Kansas.

In March, I birded at Perry Lake, not far from Topeka, and along the Kansas River. Natural lakes are rare in Kansas and are smaller than the state’s reservoirs. Its largest natural lake is Lake Inman in central Kansas, covering about 160 acres of private property. In comparison, the largest reservoir, Milford covers 15,709 acres. It is one of 24 public reservoirs built by the U.S. Army Corps of Engineers and the U.S. Bureau of Reclamation to be used for flood control, municipal and industrial water supplies, irrigation, and recreation. More than 120,000 lakes and ponds in Kansas are impoundments — created with artificial barriers, such as dams and dikes. Most are small, private farm ponds less than an acre in size.

The decline in the population of this lovely prairie crooner is likely due to the conversion of grassland habitat to other uses, pesticide use, habitat degradation due to invasive plants, and fire suppression.

“How long can a wren live?” House wrens can live as long as nine years. It has one of the largest ranges of any songbird in the New World. It breeds from Canada southward to the southernmost point of South America. A house wren weighs about the same as two quarters.

“Do mink climb trees?” They are capable of climbing trees and occasionally do so, but they aren’t normally arboreal.

Jamie Tenneson of Clarks Grove asked if any hawks other than northern harriers nest on the ground. I’m excluding nests on cliffs in this answer. There have been reports of Swainson’s hawks nesting on the ground, but that is rare. Some other ground-nesting birds have eggs that are pear-shaped and pointed, so they roll in a circle rather than away when bumped.

“When do hummingbirds return to Minnesota?” I figure on early May for their return. Ruby-throated hummingbird males arrive first. Hummingbird migration follows the flowering of key plants. Recent studies have shown that hummers follow the migration of the yellow-bellied sapsuckers. The sapsuckers drill holes in the trees and the hummingbirds lick the sap and eat insects trapped in it. Only the adult male has the full, red gorget that gives the ruby-throated hummingbird its name. The gorget derives from the name for a piece of armor protecting the throat or an ornamental collar.

“Nature teaches more than she preaches. There are no sermons in stones. It is easier to get a spark out of a stone than a moral.“ — John Burroughs

“I shall allow no man to belittle my soul by making me hate him.“ — Booker T. Washington