Renetta Ann Hamson gracefully left this world on April 6, 2018, surrounded by the blessings and prayers of her family at Fairview Nursing Home in Dodge Center. 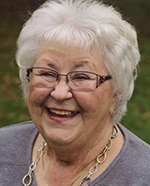 Mass of Christian burial will be at 11 a.m. Wednesday at St. Casimir Catholic Church. The Rev.  Peter Klein will officiate. Visitation will be one hour prior to the service at the church. Interment will be at Bricelyn Lutheran Cemetery, with Bruss-Heitner Funeral Home assisting the family. To leave an online condolence, visit www.brussheitner.com.

Renetta and Howard started their married life in Albert Lea. In 1963, they moved to the family farm in Bricelyn. Renetta was more than your typical farmwife. She farrowed baby pigs, raised chickens, milked cows and cultivated and harvested crops, all while raising her children.

Renetta was an avid gardener and enjoyed canning her harvest for winter. She made snowstorms the most marvelous adventures by hanging blankets, using the gas stove for treats and playing games. Her cooking was loved by so many, and her sour cream chocolate cake was a favorite for her children. Renetta enjoyed it best when eaten with dill pickles. She was known for her love of unique food combinations, and of course, her children carry on this legacy, including the best fruitcake ever.

Renetta was a game player and particularly loved teaching her children and grandchildren to play — and she always played to win. She was brilliant. Even though Renetta didn’t have the opportunity to graduate from high school, she understood the IRS tax codes, the U.S. Postal Service and locker store meats. She was right 99.999 percent of the time and her children know this to be true. Renetta had an amazing work ethic, expecting nothing less from her children.

Renetta enjoyed camping with family and traveling, not just to all 50 states, but to every grandchild’s sporting event, fair and dance. Renetta was their best cheerleader. Her talents helped create the most wonderful times for her grandchildren and great-grandchildren. From birthday cakes with sticky frosting to celebrating any of their accomplishments, she was always there.

Renetta was true to her Catholic faith, and a 40-year member of Sts. Peter and Paul Catholic Church in Blue Earth. Praying the rosary was a gift of grace she shared, and never missed Sunday church — even when she had to watch televised Mass.

Renetta’s life will be celebrated by her children, 13 grandchildren and 17 great-grandchildren, sister-in-law, Mary Ann Hamson; brother-in-law, Harold Guckenberg; and many loving cousins, nieces, nephews and their families.

In heaven, Renetta will once again be reunited with her husband, Howard (2004); her parents; granddaughter, Allison Martinson; and her siblings Donna (Newell) Trustin, Mary Lou Fosnaugh and Anthony Hauptmann.