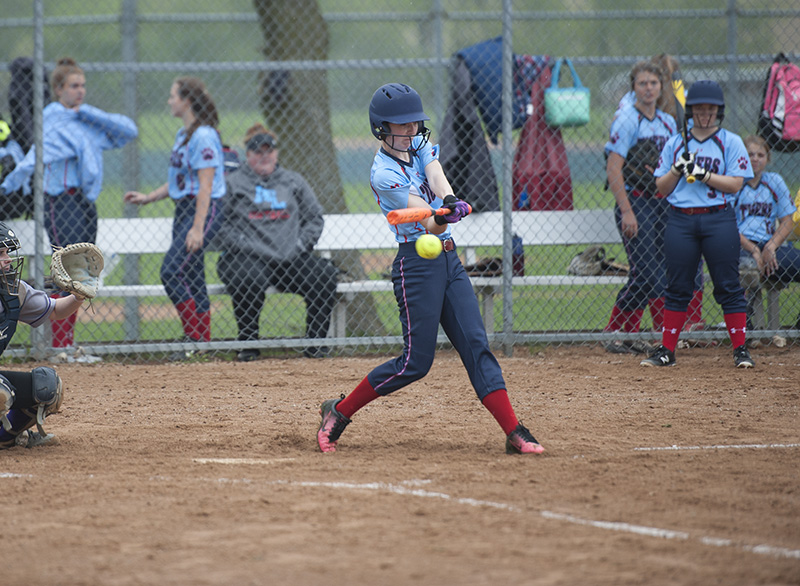 Albert Lea right fielder Mariah Posthumus makes contact TO send a ball foul in the first inning of the game against Red Wing. The Tigers would go on to lose the game, 5-3. - Tyler Julson/Albert Lea Tribune

The Albert Lea softball team hosted Red Wing Monday night in search of its first win of the regular season.

Despite a rally to tie the game in the fifth inning, the Tigers were unable to bring a lead run across, as they fell to the Wingers, 5-3.

The Wingers were the first to get on the scoreboard after an error in the second inning pushed a run across. They would add two more in the third inning to take a three-run advantage into the fourth inning.

The offense was slow going for the Tigers to start the game, with just three hits through the first three innings.

However, they turned their luck around in the fourth with three base hits, pushing one run across. Khira Hacker, Emma Renchin and Jenna Seavey recorded the singles in the inning. 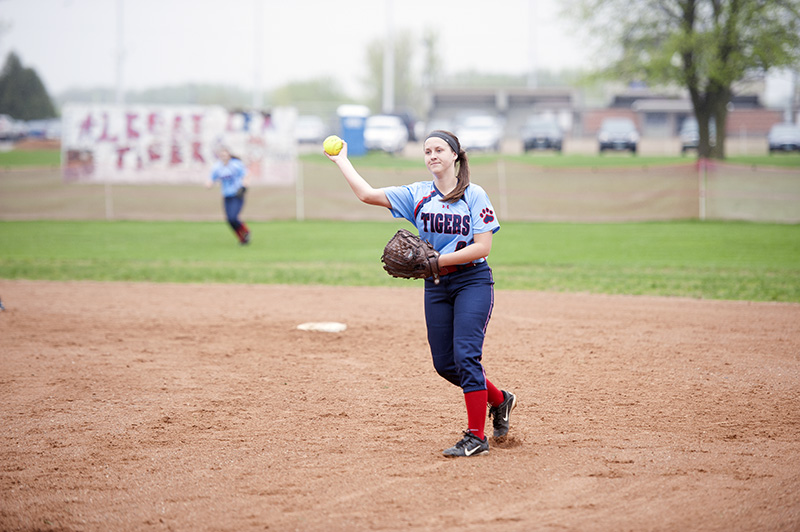 Albert Lea second baseman Taysha Sternhagen makes the easy play at first to end the inning. The Tigers would tie the game in the fifth inning, then give up a run in the sixth and seventh to lose 5-3. – Tyler Julson/Albert Lea Tribune

Albert Lea would use that momentum to tie the game in the fifth inning. After Taysha Sternhagen was able to reach base safely, an error in the outfield got her across home plate. Hacker also scored for the Tigers after Renchin distracted the catcher by stealing second.

The Tigers tied the game at three runs each with two innings to play, but the Wingers would take the momentum right back.

Red Wing would score a run in the sixth and another in the seventh, as Albert Lea was unable to get any base runners.

Starting in the pitchers circle for the Tigers was Megan Johnson. Johnson would be pulled from the game after the second inning due to injury. Mia Fjelsta was brought in to relieve, recording three strikeouts in her five-inning appearance.

Albert Lea falls to 0-8 on the season and will be back on the field Tuesday when it travels to Mankato to take on the West Scarlets.