Al Batt: Great horned owlets can take a minute to move away from home 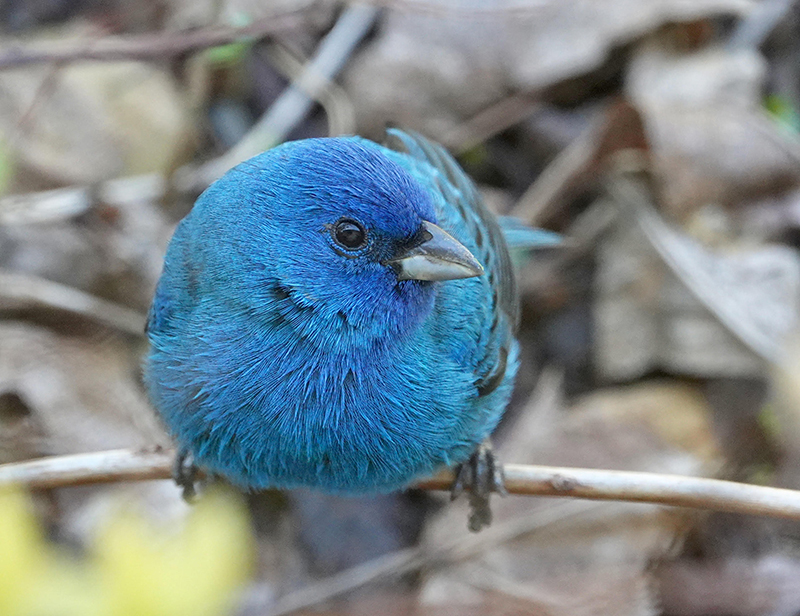 Some refer to a indigo bunting as a blue canary. - Al Batt/Albert Lea Tribune

“Everything is nearly copacetic. I’m as busy as a nudist camp mosquito. I’m pretty satisfied with myself, but I’m easy to please. Pop told me I should go to the bank and borrow more money. He believes if you owe a bank $1 million, the bank owns you. But if you owe a bank $10 million, you own the bank. Pop has more dough than a deep-dish pizza, so he has to worry about other things. He was worried because he couldn’t remember what shirt he’d worn yesterday. He’s solved that problem. He’s going to wear his favorite shirt every day. I’ve found that people do care. A fellow fell on the sidewalk the other day. Other people were careful not to step on him. My neighbor mowed his lawn. Talk about peer pressure. The grass has grown too tall for my mower. I’ll have to mow it even though in just six weeks, it’ll need mowing again.”

I’m a sustaining member of the fanatic bird feeders of my zip code.

As I came out of the house to fill the feeders, the first three birds I saw were a house finch, house wren and house sparrow. That seemed appropriate.

The yard had become Goldfinch City as the chatter of the tiny birds filled the air. I saw a Swainson’s thrush looking something like a coloring-book robin that hadn’t been completely colored. Male birds sang for the ladies. An avian serenade. Orchard orioles, while their chatter is similar, don’t whistle like Baltimore orioles, but sing more like a house finch. Carpenters worked in the yard. Woodpeckers, nuthatches and chickadees excavated nesting cavities in trees. A chipmunk being chased by another chipmunk ran over a fox squirrel feeding on the ground. The squirrel was perturbed, but the chipmunks had quickly left the scene.

Gardening was on my mind. Ancient Romans planted seeds on dirt-filled carts and rolled them into the sunshine. Rhubarb, native to Central Asia, first appeared in American seed catalogs in 1829 and is called “pie plant” by some.

From the car, I saw coots eating grass, walking as if they were wearing clown shoes. Magnolias bloomed, their flowers appearing before their leaves. I visited the National Wildlife & Fish Refuge, which covers 261 miles of Minnesota, Wisconsin, Iowa and Illinois. In 1972, the refuge had one bald eagle nest. Now it has over 250 active nests. Bald eagles incubate their eggs for 35 days with the young fledging in 12 weeks and the adults weighing 8 to 14 pounds.

Color-coordination is overrated. Each time I see a sunset, I’m reminded that orange goes well with any color.

Jim Lageson of Ellendale wrote about young great horned owls on branches and wondered if the owls eat carrion. Young great horned owls move onto nearby branches when they are about 6 weeks old. They are capable of short flights at around seven weeks of age. There can be a significant age difference in owlets as the mother typically lays an egg every couple days until the clutch is complete and starts incubating as soon as the first egg is laid. The eggs laid first hatch soonest. After leaving the nest, the fledglings remain close for several weeks, often roosting together in a tree near the nest. They react to the sight of their parents with begging calls and flights aimed at the older owls. Fledglings keep company with their parents for most of the summer. The owlets’ noisy begging can be heard into October. Most nests are used for only a single season. By the next nesting season, the young owls will have left the territory. After dispersal, most young owls are excluded from breeding by the aggressive behavior of territorial owls. Great horned owls eat almost anything that moves and will eat carrion if they must, but it probably isn’t their favorite fare.

Pat Ryan of Rapidan saw a robin with white wings and wondered what was going on there. It sounds like leucism, a genetic condition in which pigments don’t reach all the feathers. This results in white patches or a pale plumage. The bird would retain the normal color of skin and eyes. Albinism, on the other hand, results in pink eyes and skin.

“Why do young birds leave the nest before they can fly?” It’s to the advantage of some young birds to get out of the nest as soon as possible because a nest full of loud baby birds attracts predators and the nests can have parasites.

“Every day may not be good, but there’s something good in every day.” — Alice Morse Earle

“To damage the earth is to damage your children.”— Wendell Berry