Al Batt: Swallows may be good luck, but several materials keep them at bay 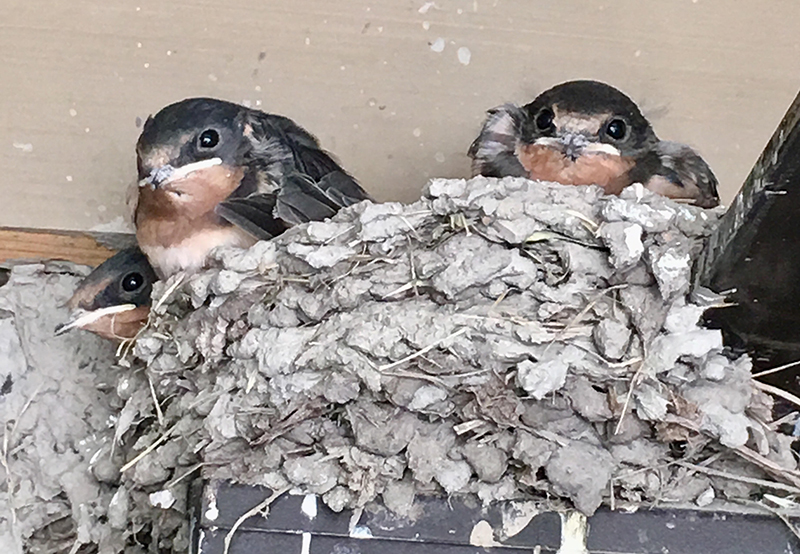 “Did you hear that Jane Johnson is marrying John Johnson‘s son, John Junior? They’re going to hyphenate their last name. So it will be John and Jane Johnson-Johnson, Junior. Pop finally got hearing aids. Ma hasn’t stopped talking since he got them. She says it’s been years since he has heard anything she has said. She saved it all and is letting him hear it. I see the neighbor has an old pickup planted in the middle of his lawn. Why did he do that?”

“I had to take time away from slaving on my Hostile Acres Farm to attend to some family matters. It involved more than enough traveling. I’m always happy to get home. My bathroom understands me. I love having the home-bathroom advantage.”

I had the blues. And I was happy to have them. There were six male indigo buntings at the feeders. It made me want to hug a cardinal. There was a female bunting, too, a lovely brown bird. Some might call her an LBJ ­— Little Brown Job.

The morning’s birdsong was a flawless symphony. An egret flew over. As egrets go, it was a great one. Bobolinks sang a song that has been described as “a tinkle of fairy music, like the strains of an old Greek harp.” Bobolinks wear black tuxedos with the wrong side at the front. Most birds with contrasting plumages are light underneath and dark on top. Not bobolinks.

The horned lark, the only native lark in North America, begins nesting early in spring and the tinkling songs of the males come from high overhead. The “horns” of the horned lark are feather tufts. A great crested flycatcher covered in feathers of earth tones pursued flying insects in the yard. I spotted turkey vultures in a dead tree. That seemed appropriate.

A squirrel ran past. They can run up to 20 mph. They work up a sweat that way, as they have sweat glands in their feet.

Jeff Bahls of Beaver Dam, Wisconsin, told me that he’d spotted a barred owl eating nightcrawlers on a road.

There are mysteries to bird migration. The wandering of birds leaves me wondering. Birds can be expected, but they can confound expectations.

A red fox trotted through my yard. I was happy to see it. A study by an ecologist at the Cary Institute of Ecosystem Studies found that where Lyme disease is found, it occurred most often where fox numbers were the lowest. The reason is because red foxes are effective predators of mice, major carriers of Lyme disease.

The day’s red-winged blackbird’s opponent was a bald eagle. The blackbird was fighting out of its weight class, but it hectored the eagle enough that it landed in a farm field. The feistiness of a redwing is impressive.

I heard “kek-kek-kek” coming from on high. It was the call of a Cooper’s hawk, the chicken hawk of my boyhood days. I hear that sound often when I’m near the raptor’s nest. An impressive aerial skirmish took place. A crow and the hawk fussed with one another. Then a second crow came in like the cavalry to put the hawk on the run. They forced the Cooper’s to land in a tree. The crows turned to fly away and the hawk came shooting out of the tree at breakneck speed and chased both the corvids out of the neighborhood.

Mary Thostenson of Ellendale asked if goldfinches will nest here. The American goldfinch’s main natural habitats are weedy fields and floodplains, where plants such as thistles and asters are common. They’re also found in backyards, cultivated areas, orchards and roadsides. Goldfinches can be found at feeders all year. They don’t start nesting until July when the fibers, such as thistle down, they need for nesting material become available.

Dennis Seaton of Emmons asked how to prevent barn swallows from nesting under the eaves of a house. It has been speculated that one reason swallows choose to nest close to humans is because that keeps crows and other predators away. In some cultures, it’s considered good luck to have barn swallows nest on a house. To prevent barn swallows from nesting on a building, cover the area with bird netting, chicken wire, aluminum foil or plastic cling. It’s generally four weeks from the time the swallows begin incubating eggs until the young leave the nest.

“Character is like a tree and reputation its shadow. The shadow is what we think it is and the tree is the real thing.” — Abraham Lincoln