Myra Frances Webster, 89, of Albert Lea died Tuesday, May 8, 2018, at St. Marys Hospital in Rochester. In accordance with her wishes, the body has been cremated and memorial services will be scheduled for a later date. 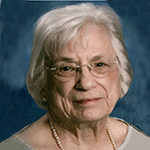 Myra was born July 17, 1928, the daughter of William and Mina (Goodroe) McCorkle, in Worth County, Georgia. She graduated from Moultrie High School. On Feb. 2, 1953, she was married to Ernest William “Bill” Webster at her parent’s home in Moultrie, Georgia.

She worked in accounting for several years at various firms and also as a homemaker. Myra was a member of the Order of the Eastern Star, bridge groups, quilt guilds, altar guilds, golf leagues and the Lutheran church. She enjoyed many hobbies, including golf, quilting, bridge, sewing and oil painting.

Survivors include her husband, Bill; four children, Stephen Webster of Kent, Ohio, Barbara Stapleton of Albert Lea, Kathryn Ludtke of Eden Prairie and Craig Webster of Billings, Montana; and 10 grandchildren, Ryan, Jessica, Julia, Jeffrey, Jason, Brent, Brianna, Brooke, Madison and Mason; along with eight great-grandchildren and one on the way.

She was preceded in death by her parents; brother, Tom McCorkle; and three sisters, Louise Gill, Catherine Strange and Anne Bennett; along with a son, Kevin Webster.

Online condolences may be directed to the family at www.iowacremation.com under obituaries, or to www.billwebster5897.com.