Al Batt: A goose chase: For many Canada geese, it is time for molt migration 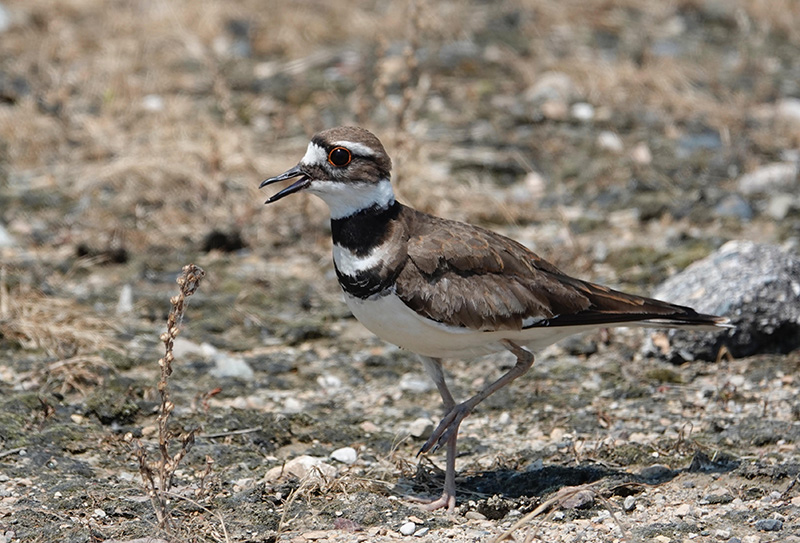 Not a single killdeer has ever been convicted of murdering a deer. Al Batt/Albert Lea Tribune

“Everything is nearly copacetic. My garden looks good. Carrots are good for the vision, but my eye doctor says that eyeglasses are better. All that is on my bucket list is KFC. I just found the recipe for a delicious instant breakfast. You should jot it down in that painfully childish scrawl of yours.”

“Here you go. I’ll leave out any big words you’d be unable to spell. First, get out of bed. Get dressed. Drive to the Eat Around It Cafe. Find a seat. Tell the waitress that you’ll have the breakfast special. That’s all there is to it. Instant breakfast.”

The lawn is many shades of green and I’m able to walk on it. Life is good. Catalpa and Japanese lilac bloom. A cacophony of crow sounds came from the backyard. The birds were bedeviling something. An eastern phoebe filled its bill with nestling chow.

I gazed at a wood duck box. Paul Peters of Ceylon told me that he’d seen wood ducklings jumping from a nest box. It’s an amazing thing to witness.

I stopped by a wetland to gawk at the birds there. A double-crested cormorant was perched with its wings spread on an open branch in order to dry its feathers after fishing. Cormorant feathers become soaked rather than shedding water like those of a duck. This is thought to help cormorants hunt underwater more effectively. Cormorants regurgitate pellets containing undigested parts of their meals such as bones just as an owl does.

Many Canada geese were present. This is the time of molt migration. Nonbreeding and failed breeding geese fly northward in late May and early June, heading to northern waters, where they molt their flight feathers and feed on vegetation in an earlier state of growth to fuel their molt. They summer there and fly back here in September and October. They mate for life, but most Canada geese don’t breed until they are three years old. Newly hatched goslings eat primarily aquatic insects becoming grazers at about three weeks of age. Five weeks after the goslings hatch, the adults molt, which renders them flightless until the goslings can fly at 9 to 10 weeks of age. That’s usually during the second half of July.

Goslings are precocial. They hatch with eyes open, covered with down and leave the nest promptly. All passerines, such as robins, hatch with eyes closed, wearing little or no down, incapable of departing from the nest and are fed by the parents. The goslings spend up to 28 days in the egg, so they’re able to walk, swim and feed themselves shortly after hatching. The chicks of most songbirds (passerines) spend less time maturing in the egg and must spend more time developing in the nest.

You might be a red-necked grebe if you nest in Freeborn County. Darcy Sime of Alden found a nesting red-necked grebe in Freeborn County. It’s the first nesting record for this species in the county. I saw a common gallinule in Ellendale. Jim Muggli of Albert Lea found some penstemon grandiflorus. Denny Martin discovered a cerulean warbler at a White Woods County Park.

Jim Grotte of Fairmont watched grackles rub ants on their feathers and wondered why the birds did that. Most ants secrete formic acid when threatened. Some scientists believe birds practice anting to remove mites living on their bodies. I’ve watched a bird rubbing a cigarette butt over its feathers. I assume for the same purpose.

“Do bald eagles pick off roosting turkeys during the night?” The eagles don’t hunt at night. They don’t swipe roasting turkeys either.

A Rapidan resident asked where bat houses should be mounted.

Bat houses should be mounted at least 10 feet above ground, 12 to 20 feet is better. Choose a sunny location on the east or south facing side. Bat houses work best with at least 6-8 hours of direct sunlight, with a morning sun preferable.

A Mankato reader asked about the color change of the coats of deer. This change provides both thermoregulation and camouflage. Summer coats are reddish and thin, allowing deer to better cope with heat stress. In the fall, hormonal changes cause the coat to turn the faded gray or brown color of its winter coat. The new coat is comprised of two layers. The outer guard hairs are hollow, stiff and longer than the undercoat. The inner layer is soft and dense, which insulates deer from cold weather and snow. Coat color tends to be darker in forested areas and lighter in agricultural areas where deer are exposed to more direct sunlight.

“Let us praise the noble turkey vulture: no one envies him; he harms nobody; and he contemplates our little world from a most serene and noble height.” — Edward Abbey

“For me, I am driven by two main philosophies, know more today about the world than I knew yesterday. And lessen the suffering of others. You’d be surprised how far that gets you.” — Neil deGrasse Tyson