Al Batt: Dandelions are important sources of nectar for bees in the spring 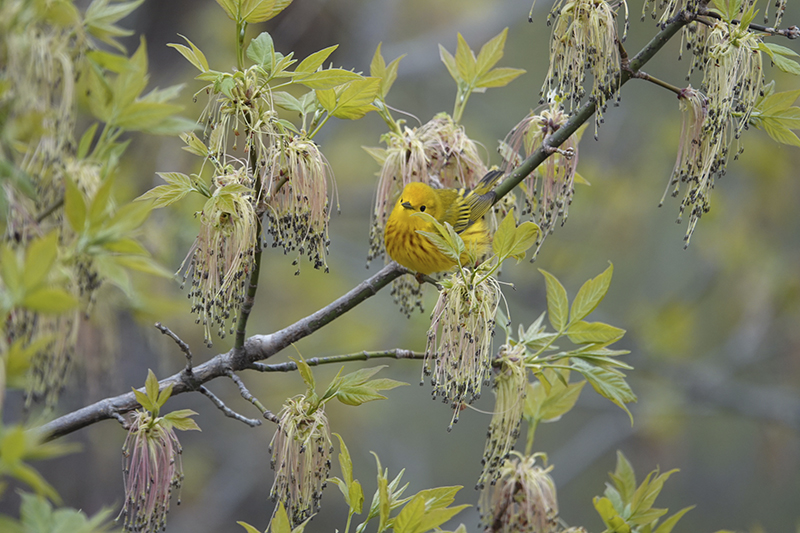 “Everything is nearly copacetic. Today is laundry day. I’ve been out of clean bath towels for a couple of weeks now and I’m tired of using a hair dryer to dry off after a shower. I’ve started wearing shorts regularly. My glowing white legs act as beacons to low-flying airplanes. I’d love to pick your brain, but the one you picked isn’t working all that well. I guess that’s OK. I forgot what I was going to ask you anyway. I have a lot on my mind. There is no slack in my slacks. My kindergarten class reunion is coming up. It’s been quite a journey, but I’m worried about the 200 pounds I’ve gained since then.”

A gray catbird was sitting pretty. It was in the catbird’s seat next to our bedroom’s screened window. Its plumage is muted, but it has an abundance of personality. Its mimicking song is a series of short musical and harsh notes collected into phrases. A song can last 10 minutes, but it seems longer outside my predawn window. A catbird puts in a long day, as it continues to sing after the sun goes down.

I visited several grocery stores as I did my errands. The cheapest grape jelly was absent from their shelves. It had gone to feed orioles. Chipmunks like jelly, too. I watched one putting sunflower seeds into its mouth, using its cheeks as lunch boxes.

I spotted a tiny bird standing out from the green vegetation. It was more yellow than bird. It was a yellow warbler losing yet another game of hide-and-seek. A friend, Dave Lewis of Stow, Ohio, said that it sings, “Feet, feet, feet; smell my feet.”

Another bird, petite and blue, perched nearby. The indigo bunting breeds from southeastern Saskatchewan east to New Brunswick, and south to central Arizona, central Texas, Gulf Coast and northern Florida. It must be very tired.

Samaras, the winged seeds of maple trees, covered the drive. They had been carried by the wind. As a child, I called samaras whirlybirds, helicopters or whirligigs.

By Jiminy! Crickets called by rubbing their wings together.

Dandelions serve as important sources of nectar for bees in the early spring, when most other flowers aren’t yet in bloom. Creeping Charlie, also called ground ivy, is an herbaceous plant native to Europe, brought to North American by the European settlers as medicine and a ground cover. Who was Charlie and why was he creeping? I strolled by the rhubarb. One of my parents preferred cutting rhubarb while the other felt pulling was the best way to go. My mother reminded me that no more than a third of the plant should be harvested at one time.

A turkey vulture took advantage of the 86,400-second rule to enjoy a road-killed raccoon. I found a pileated woodpecker on the road. Pileated can be correctly pronounced PIE-lee-ay-tid or PILL-ee-ay-tid. Sadly, I pronounced this handsome woodpecker dead.

Some arborvitae has browned. This is a severe example of winter drying, which can affect many kinds of evergreens. In late April, the warm, windy days with low humidity caused needles to lose moisture. Frozen soil in the root zone prevented water from moving into the needles to replace the lost moisture. Branches buried under the snow remained alive because they weren’t exposed to the warm, windy and dry environment. If a tree has 50 percent or more green needles, it may recover.

Ed Pfannkoch of Chatfield asked for the best strategy to assist dazed birds that have hit windows. The greatest danger to a stunned bird is its vulnerability. An immobilized bird makes easy prey for cats and other predators. Place a dry washcloth or paper towel in the bottom of a shoebox to give the bird’s feet traction. Pick up the bird gently and put it into the box. Place the box indoors somewhere dark and quiet. Darkness calms the bird, which speeds recovery. In an hour, take the box outside and remove the lid. If the bird flies away, feel free to give an imaginary friend a high five. The Wildlife Rehabilitation Center of Minnesota located in Roseville is a great help with injured birds. Their phone number is 651-486-9453.

“When is the best time to see a firefly in Minnesota?“ I typically see them from the second half of May through August, with July being an excellent month for viewing lightning bugs and their natural fireworks.

“Nature is painting for us, day after day, pictures of infinite beauty if only we have the eyes to see them.” — John Ruskin

“No sun outlasts its sunset, but it will rise again & bring the dawn.” — Maya Angelou