Al Batt: Size of owls’ eyes reflect what the birds use them for: night vision 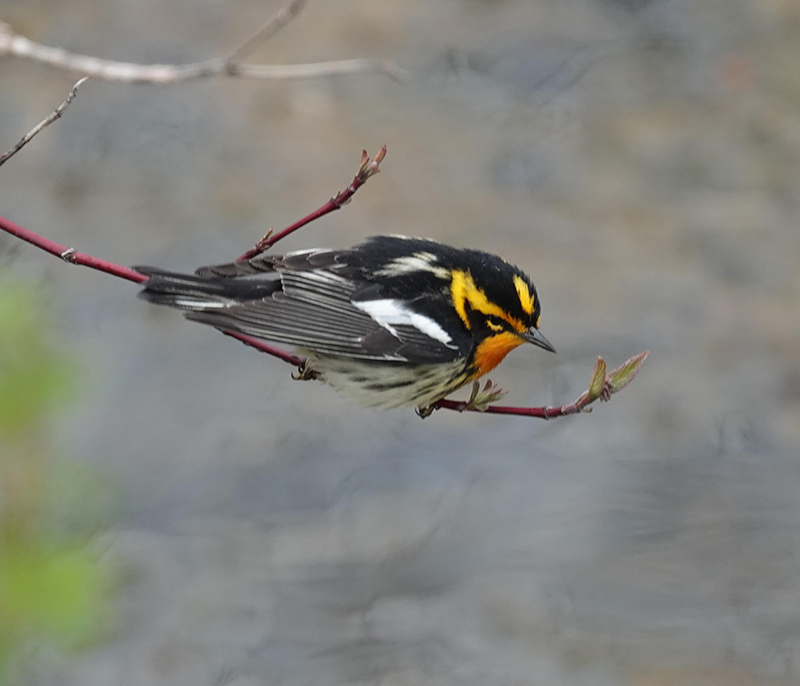 The Blackburnian warbler was named after the botanist Anna Blackburne. The baseball team could have been named the Baltimore Blackburnians. - Al Batt/Albert Lea Tribune

“Everything is nearly copacetic. I had the best salad I’ve ever had yesterday.”

“Eating a jar of bacon bits isn’t the same as eating a salad,” I say.

“What made it so good was that my neighbor Still Bill, he makes more dust than miles, bought it for me. I’m not saying he is tight, but if you put a dollar bill in one of his pockets and a rattlesnake in another pocket, you’d never know which one would come out first.“

I heard a western meadowlark sing. I listened long and hard to this voice of my generation. An owl had called in the darkness, part of the job description of a night owl.

I spent an entire day walking trails at a fish hatchery located near Bayfield, Wisconsin. Winter wrens called most of the time. Winter wrens, like house wrens, are little birds with big voices. A wren is 90 percent song. Most of the singing had been done by males hoping to attract a hen wren. A winter wren’s song is more powerful than that of a crowing rooster. Yellow warblers, common yellowthroats and ovenbirds sang constantly, too. Mnemonics of the songs of those birds are as follows: Yellow warbler ­­— “Sweet sweet sweet, I’m so sweet,” common yellowthroat — “Follow me, follow me,” and ovenbird — “Nature, nature, nature.” A common mnemonic for a backyard bird would be the “Hula, hoop, hoop, hoop” of a mourning dove. What would a mnemonic be for the winter wren’s rich, bubbling, cascading song? I don’t know. I’m sure there are some, but I find its song too complicated and busy to welcome such a thing. I saw a couple of scarlet tanagers, lovely black-winged redbirds. I was so taken with the handsome tanagers that I nearly stepped on a nesting Canada goose.

My father called the yellow warbler a summer warbler. Among the 21 species of warblers I saw was a Blackburnian warbler. Its striking black-and-orange pattern is breathtaking.

I walked a wooded wetland near Ashland, Wisconsin. My eyes were treated to the loveliness of the marsh marigolds and my nose detected the putrid odor of skunk cabbage. I think skunk cabbage plants are beautiful and they produce enough of their own heat to melt snow. It gets its name from the pungent, skunk-like smell it makes. To me, the stench is more like that of a rotting carcass. This smell attracts flies and other insects for pollination.

Each year, I make a point of moseying along the winding paths of Munsinger Gardens and strolling the brick walkways of Clemens Gardens in St. Cloud. These beautiful gardens situated along the Mississippi River offer hardy perennials, over 1,000 roses, 100,000 annual plants and a garden inspired by the world-renowned White Garden at Sissinghurst Castle in Kent, England.

I opened the door to the house and a June bug, also called a May beetle, flew in. It bounced off a lampshade and fell to the floor. The June bug found itself on its back, like a tipped-over turtle, pawing the air with its legs. I released it outside.

I was pleased to see a monarch butterfly. The area of Mexican forests occupied by overwintering monarchs fell to 6.12 acres from 7.19 acres the prior winter. The number of treed acres occupied by monarchs measures butterfly populations. Twenty years ago, 44 acres of trees held butterflies. Bad weather, illegal logging, habitat destruction and herbicides killing milkweed are the main threats to the butterflies.

“Why are owl eyes so big?” Because if they were smaller, they’d fall out of their eye sockets. Large eyes let in more light than small eyes, enhancing the ability to see in the dark. A great gray owl, weighing 2 1/2 pounds, has eyes larger than those of most humans.

“I’ve noticed some Canada goose goslings have gone missing. What preys upon goslings?” The size, intelligence, wariness and aggressive behavior of the parents limit predation on goslings. Foxes, coyotes, raccoons, mink, eagles, owls, snapping turtles, hawks, gulls and crows would love to take a gosling out for lunch.

“Why are ladybugs so brightly colored?” It’s a warning to predators of a lady beetle’s toxicity.

“Only when one comes to listen, only when one is aware and still, can things be seen and heard. Everyone has a listening point somewhere. It does not have to be in the north or close to the wilderness, but someplace of quiet where the universe can be contemplated with awe.” — Sigurd Olson

“Whoever has learned how to listen to trees no longer wants to be a tree. He wants to be nothing except what he is. That is home. That is happiness.” — Herman Hesse