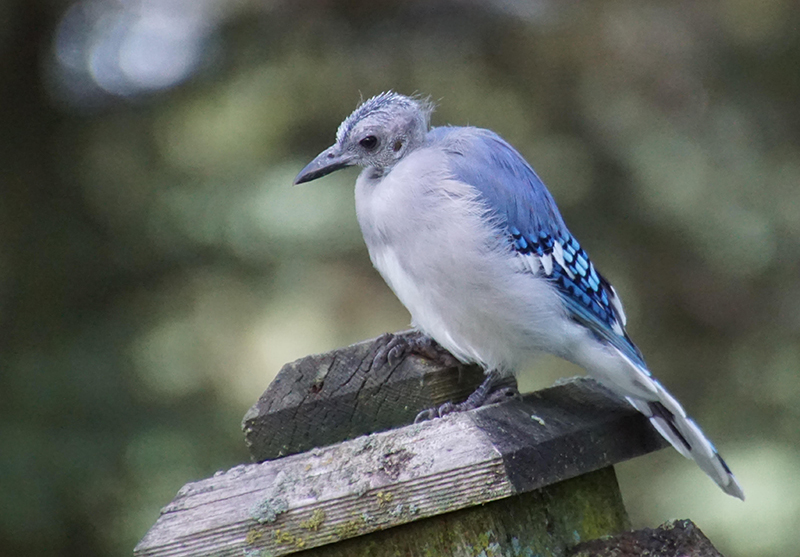 “Everything is nearly copacetic. I had my ears checked. The doctor said they hadn’t changed much since my last exam. I still had two of them. I’ve been helping my neighbor Still Bill remodel his garage. It’s the most work I’ve ever seen him do. Still Bill believes there is no reason to make an effort when an excuse works just as well. It’s not his fault. He tries to exercise, but he can’t outrun a fork.”

I tiptoe through nature. I love to do that.

House wrens had become the main source of birdsong in my yard. Their competition came from fledgling birds crying, “Feed me.” The demanding youngsters inspired me to pick ripe tomatoes. Flavorful orbs of fine eating. I heard a dog day (annual) cicada call. I typically hear them from July into September. Hot weather fans their singing flames. These insects are providers of late summer sounds and memories. Folklore says that a cicada’s buzzing song declares that frost is but six weeks away. The cicada isn’t a proficient predictor of dropping temperatures.

I spotted earwigs on the milkweeds I’d planted for the monarch butterflies. An obvious feature of an earwig is the pair of pincers or forceps at the tip of the abdomen. Both sexes have these pincers; in males they are large and curved, whereas they’re straight in females.

I watched red fox kits at play. I love seeing foxes for many reasons. One is because I dislike Lyme disease. A study found the red fox to be a major agent of control of that disease due to its fondness for mice as food. Mice are efficient transmitters of Lyme disease.

I watched American white pelicans floating on the water. Pelicans have a pouch that would make a kangaroo proud. Dixon Lanier Merritt wrote, “A wonderful bird is the Pelican. His beak can hold more than his belly can. He can hold in his beak enough food for a week! But I’ll be darned if I know how the hellican?” Pelicans are splendid fliers and soar magnificently on giant wings, but becoming airborne can be challenging without the aid of the wind. Pelicans must run over the water while beating their wings and pounding the water’s surface with their feet to get enough speed for takeoff. Their feet flapping sounded like Fred Flintstone starting his car.

“Why did I see a bald bird at my feeder?” Don’t be surprised to see a bald cardinal or jay in July and August. It’s normal for some birds to go through an abnormal molt with an odd replacement of feathers.

“What three fictional birds are featured on the Hollywood Walk of Fame?” Woody Woodpecker, Donald Duck and Big Bird.

“My field guide calls it a gray jay, but I thought it was a Canada jay.“ Some people call it a camp robber or a whiskey jack. The bird’s name officially became the gray jay in 1957. The North American Classification Committee of the American Ornithological Society changed the name to Canada jay this year.

“How many bumblebees are there in a nest?” Bumblebee nests vary in size depending on the species and time of year. A nest may contain 50 to 400 bees. Honeybee hives typically contain about 50,000 bees.

“I saw a squirrel that looked as if it were eating pavement. Was that what it was doing?” If you saw a squirrel pressing its nose to the pavement of a road or parking lot, it was likely licking minerals (especially salt) from the cement or asphalt.

Alima Fairchild of Rushford asked if scarlet tanagers are common in Minnesota. They are common, but not commonly seen.

The estate of Myron and Stephanie Pederson gave a 10-acre plot of land to the Albert Lea Audubon Society in 1987. Audubon purchased an additional six adjacent lots. The Audubon Preserve is in the southwestern part of Albert Lea at the end of Oregon Street. Loren Kaiser maintains nearly two miles of mowed trails. Dustin Demmer provided native plantings. Birds and wildlife abound. Motorized vehicles and picnicking are prohibited in respect of the wildness of nature. The next time someone tells you to take a hike, and they will, take it at the Audubon Preserve.

“Over every mountain there is a path, although it may not be seen from the valley.“ — Theodore Roethke

“If you can’t be in awe of Mother Nature, there’s something wrong with you.” — Alex Trebek