Al Batt: Other states may get naming nods, but no birds have Minnesota moniker 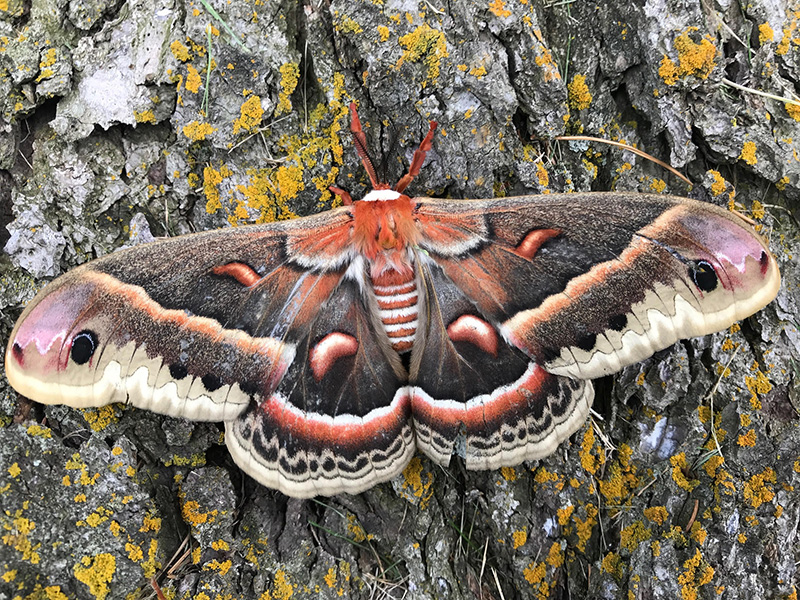 This photo of a cecropia moth was take by Janet Johnson of Otisco.

“Everything is nearly copacetic. I gave Pop a computer, but he gave it back. He doesn’t want a computer until one can be taught how to catch a walleye. Ma doesn’t mind when Pop forgets to zip up his fly. At least that means he remembered to wear pants. My cousin Clancy was supposed to be here in March. He didn’t show up until June. Daylight saving time messes him up. I was going to turn on the air conditioning, but it was too hot to do even that. On a terrible hot day, I remember the words to an old song that goes something like this, ‘It ain’t no sin to take off your skin and dance around in your bones.’ Clancy is like my neighbor Still Bill, he couldn’t get out of his own way. Still Bill isn’t lazy; he just doesn’t want to do everything and then end up with nothing to do when he retires. Still Bill, who once lost a race with a glacier, has a cast on his foot.”

“No, he stepped in a bucket of cement.”

I’d been out the door at 4 in the morning. I’d awakened without an alarm clock, as I tend to do when I look forward to something. The morning’s fog exceeded the fog in my brain, but there were birds that needed counting. They were counting on me. I did a Breeding Bird Survey (BBS) in June. I’ve been doing the same route for many years and it was good being back in the counting saddle after missing the BBS last year when I was on the disabled list.

I counted birds for three minutes each at 50 regular stops. At one stop, I watched a fox squirrel walk down a farm drive and right up to my car. It gave me a baleful look while sitting up on its rear legs. Apparently satisfied that I was a harmless man who had been fairly warned, the squirrel ambled back up the drive from whence it had come. It was obviously a watch squirrel.

I watched five wild turkeys walk bean rows. I’d done the same thing when I was a young turkey. Several sandhill cranes flew over. They had nested there for some years. I was pleased to see them. The day was filled with newly minted robins.

Butterfly weed, a much more vivid orange color than a monarch butterfly, demanded my attention. Orange isn’t an exceedingly common color in nature this time of the year. Daisy fleabane presented more rays per flowerhead than I could count.

Days earlier, I’d stood transfixed as a red-winged blackbird male flew down from a tree and landed on the back of a Canada goose gander. The gander was in the company of his missus and a few goslings. Ganders are particularly aggressive in that case, but this gander put his head down and rushed to the water of a pond as the blackbird rode along as if he were in a saddle, pecking and prodding the gander on his way. The goslings and the missus waddled behind. Once in the water, the gander was freed of his tormentor. I hoped the goslings would one day be able to look again at their father as if he were all-powerful.

“Is there a bird named after Minnesota?” No, but there should be. Something like the Minnesota minnow heron, Minnesota timber hawk or Minnesota casino crow. There are a number of birds that carry a state as their first names. California (condor, gnatcatcher, gull, quail, scrub-jay, thrasher and towhee), Connecticut warbler, Florida scrub-jay, Kentucky warbler, Louisiana waterthrush, Mississippi Kite, Tennessee warbler and Virginia rail. There are also two with Carolina as a first name — Chickadee and wren. There is a Virginia’s warbler, but it carries the woman’s name that discovered the bird.

“What bird holds the record for the longest legs in relation to body length?” The flamingo is the likely winner with one of the five species of stilts coming in second. The ostrich was in the running.

Tom Belshan of Glenville asked what the caterpillar of the cecropia moth eats. The cecropia moth (robin moth) is North America’s largest native moth, with a wingspan approaching 6 inches. The caterpillar, as long as 4.5 inches, feeds on the leaves of hardwood trees such as: Birch, boxelder, cherry, elm, hawthorn, linden, maple, oak, poplar and willow. Cecropia moth adults don’t eat. A good number of people have reported seeing these lovely moths this year.

I bid farewell to Earl Jacobsen of Albert Lea. Jake had been a humble servant of the Albert Lea Audubon Society and many other organizations for years. He did so with grace. He loved the earth and the sky. As the rain poured down onto the roof at my friend’s funeral, the minister said, “Listen to the beauty of nature.”

“Everything has beauty, but not everyone sees it.“ — Confucius

“Each life is made up of mistakes and learning, waiting and growing, practicing patience.“ — Billy Graham