A Freeborn man who allegedly strangled someone he knew Sunday was charged with a felony the following day in Freeborn County District Court. 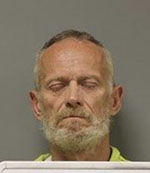 Dennis Carl Christensen, 58, is charged with domestic assault by strangulation.

Court documents state Christensen was charged after deputies responded to a report of a domestic assault Sunday in Gordonsville.

The alleged victim reportedly said she was in the living room playing a game when Christensen began complaining about a rumor, threw her phone into the dining room, screamed at her and “took his arm and shoved it under (her) chin,” after she used her foot to push him out of her face, court documents state.

Court documents state Christensen prevented her from calling 911 before she went to a neighboring house and called 911.

Christensen reportedly admitted they had an argument and that he got in her face but denied strangling her.

Judge Carol Hanks released Christensen on his own recognizance, contingent on him not using or possessing alcohol or controlled substances, submitting to chemical testing and meeting other court requirements.

Christensen’s next appearance is scheduled for July 26.

See what was on this weekend’s police logs. Click here.