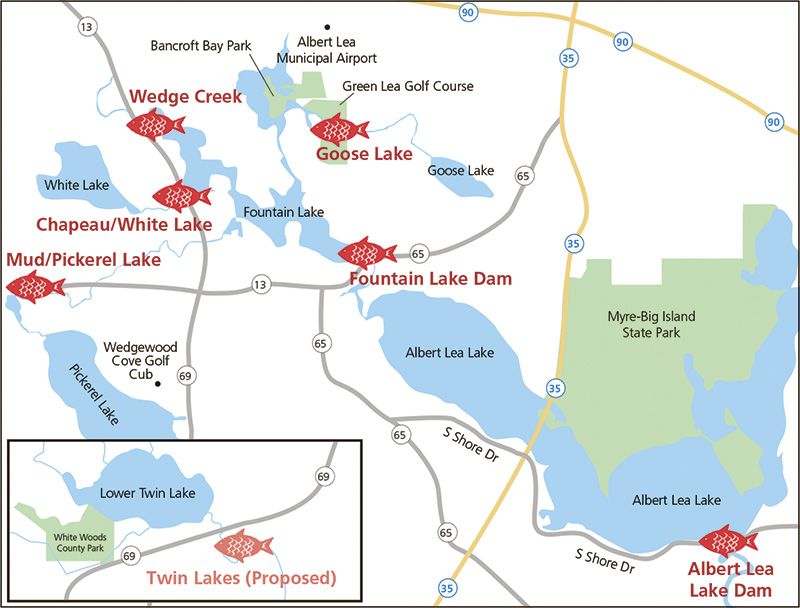 Editor’s note: This is the third in a five-part series on carp management efforts in the area.

According to a Minnesota ecologist working with the Shell Rock River Watershed District, effective carp management techniques are like Lay’s potato chips: You can’t have just one.

“We have this big toolkit to use,” WSB Senior Ecologist Tony Havranek said. Havranek is working with the Shell Rock River Watershed District to manage the carp population in Fountain Lake. His recent work tagging common carp in Fountain Lake with transmitters that allow the district to track the carp’s movement is one tool in the box, but it’s not the only tool.

It isn’t the first attempt to build a sustainable carp management strategy, either. According to Watershed District Conservation Technician Scott Christenson, that foundation was set with the construction of a handful of fish barriers, starting with one near the northeast end of Mud Lake in 2008.

Since then, the district has continued adding fish barriers to the watershed’s landscape. They’ve targeted major arteries in the watershed’s circulatory system, adding fish barriers as tourniquets to staunch the flow of carp between water bodies. The purpose of the barriers, Christenson said, is to limit potential for recruitment: to keep carp from heading upstream to spawn and to keep carp in Albert Lea Lake from changing addresses.

So far, there’s been success.

“Since we started this project, we found out that we’re basically eliminating recruitment, it’s called, of common carp,” Christenson said of Fountain Lake specifically.

Five of the six existing fish barriers are around Fountain Lake; the sixth barrier is at the Albert Lea Lake dam.

“We cut off all these satellite lakes because we knew that carp were driving a lot of the phosphorus suspension in (Fountain) Lake,” Christenson said.

The district’s electric fish barriers utilize electricity to discourage fish from moving into different water bodies. Electrodes in the water conduct an electrical current. The water needs to have a specific conductivity for the barriers to work; cleaner water conducts less electricity, Christenson said. The district can use an analysis of the water’s conductivity to determine how far out the barrier will reach. Christenson said the water will conduct electricity out to will three to four feet from the barrier.

The feeling is gradual. As fish get closer to the barrier, the more uncomfortable the electricity makes them until eventually, the fish can be stunned. Christenson said the fish are usually deterred before it reaches that level. Fish are also lead away from the barrier by the water’s natural direction of flow.

The fish barriers and tags work in tandem, like two heads on the same screwdriver: The focus of tagging fish with passive integrated transponder tags is to determine the efficacy of the fish barriers, Christenson said. If data from the tags shows the barriers are not deterring fish from moving into other waters, the barriers can be recalibrated to a higher voltage.

But while PIT tags give good data on a specific, short length of river or stream segment, radio tags give real-time data on locations of a tagged fish, Havranek said, allowing those tracking to see where carp like to aggregate. In this way, information gathered from radio tags can be valuable for commercial fishermen, who can use that data to identify what spots may prove more lucrative.

In Fountain and Albert Lea lakes, that job falls to Jim Mertins.

According to Jack Lauer, regional fisheries manager in southern Minnesota, Minnesota has approximately 20 licensed commercial inland fishing operations statewide. Commercial fishers are assigned to certain areas, often counties, to fish the waters in those areas, and according to Lauer, the process has been around for decades — 50 to 70 years, he estimated.

Permits are reissued on an annual basis. The DNR issues Class B permits for commercial fishers to operate in specific lakes, and they do so with intention, Lauer said.

There’s no cap for how much carp commercial fishers can remove from the lake as long as they stay within the time frame allotted by their permit.

“They can take as many carp as they can catch,” Lauer said.

The commercial inland fishing season goes from the day after Labor Day to the day before the walleye fishing opener eight months later, Lauer said. In some cases, the DNR will issue a special permit out of season. Lauer said they have done so for Mertins.

Mertins said he seined both Albert Lea and Fountain lakes within the last year. He estimates he removed 30,000 pounds of fish from Fountain Lake in March.

However, Mertins said he spends more time on Albert Lea Lake than Fountain, because it is both larger and has more fish — “actually, quite a few more fish.” His total from a handful of September days fishing in Albert Lea Lake reached approximately 47,000 pounds, and he removed another 43,000 pounds in October.

“As much as Minnesota is stuck on walleye … there is a huge sector of the public that eats carp,” Lauer said.

With all the tools in the kit, however, one is being left on the bench for Fountain Lake’s carp management strategy.

In 2009, Pickerel and Mud lakes were treated with rotenone, a chemical found naturally in plants but synthesized for use as, among other things, a piscicide. The treatment was applied aerially. Christenson said the project had a successful fish kill, and the fish barrier was already in place to control recruitment. Afterward, the DNR came in to stock the lake with fingerling northern pike, bluegill and perch and saw tremendous growth rates in pike, Christenson said.

Christenson called the treatment moderately expensive — for Pickerel and Mud Lake. But for Fountain Lake, the cost of rotenone is a deterring factor. Additionally, a lake treatment would require a majority of lakeshore owner agreement, which Christenson said has stopped similar treatments on other, small lakes under the watershed district’s purview.

Instead, the district will continue moving forward with current efforts, collecting data on carp movement and implementing other management tools in the name of a healthier lake.

“In the general sense, the more carp you can remove out of the lake, the better response the lake will have as far as eutrophic level and the nutrient level — that impacts the entire food chain,” Lauer said.

Find the first part of the series here.

Find the second part of the series here.

Find the fourth part of the series here.

Find the fifth part of the series here.