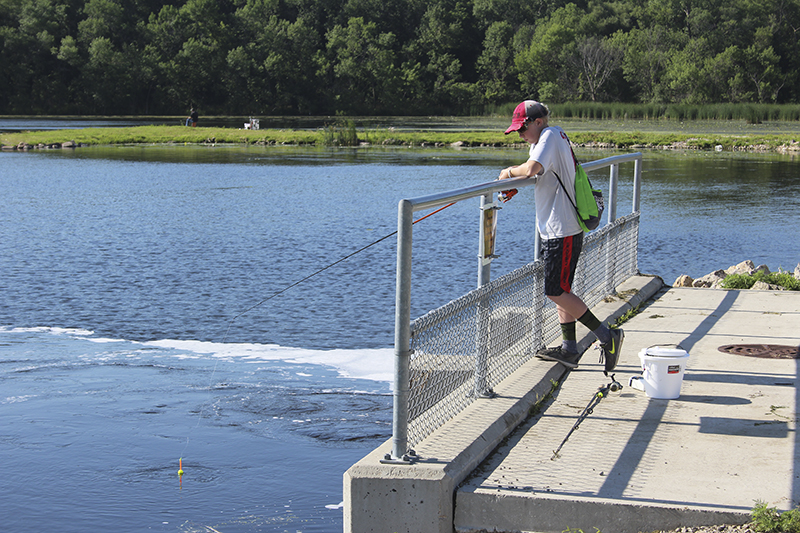 Caden Galbraith drops a line into Clear Lake Friday morning, his bobber stationed near the flow created by the pump station across the road. - Sarah Kocher/Albert Lea Tribune

Editor’s note: This is the fourth in a five-part series on carp management efforts in the area.

CLEAR LAKE — Across the road from the 400-acre Ventura Marsh is a wide sidewalk and a fishing jetty. It loops inward, working in tandem with the land’s curve on the opposite side to create a small bay shape like a crescent moon. On Friday morning, there was more than one boy fishing off its back as a small whitish fizz of water pushed out from under the road and into Clear Lake, pumped in from the marsh opposite.

The pump station, installed in conjunction with the Army Corps of Engineers, is one “big-ticket item” in a larger-scale restoration project underway in Clear Lake, said Iowa Department of Natural Resources Clear Lake Fisheries Biologist Scott Grummer. It works together with fish barriers and commercial fishing to manage common carp in the Clear Lake Watershed.

Of the entire watershed, Clear Lake makes up close to half, Grummer said — it’s about 4,000 acres of the over 8,000 in the watershed. Ventura Marsh is on the upper end of the Clear lake system. With its vegetation and shallower waters, it provides good conditions for prolific carp spawning.

So when Grummer says, “I’d say our main focus is trying to keep carp out of those spawning habitat areas where we don’t want them,” he means — mainly — Ventura Marsh.

“That’s, I think, a very key piece to Clear Lake, and the future of carp is trying to manage that marsh system,” Grummer said.

The pump station is capable of pumping 20,000 gallons of water a minute. On Friday, one of the two pumps was turned on. The pumps can be used to drain the marsh to minimum water levels in just under a week, Grummer said. This allows the DNR to do two things: to eliminate any carp that may get into the lake, and to restore vegetation and habitat so the water traveling through the marsh comes out, into Clear Lake, a much better quality. 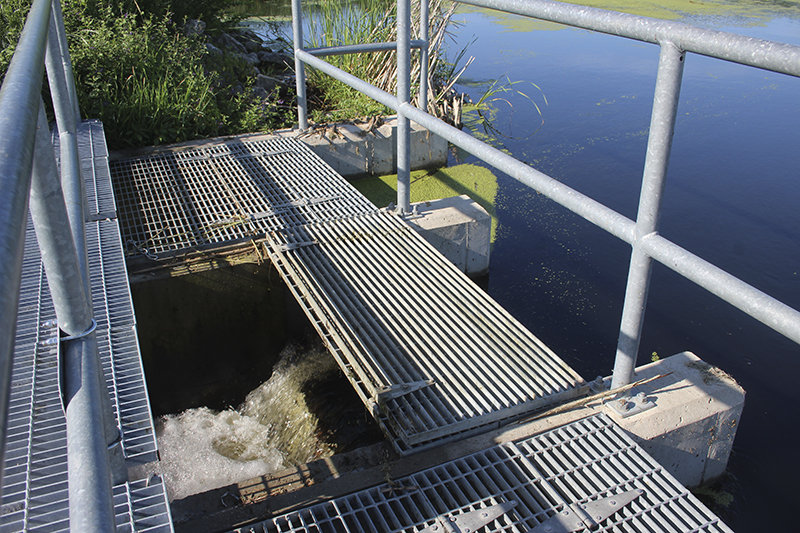 Water flows through the fish barrier, out of Ventura Marsh and into Clear Lake, below the grate installed to keep the public from transporting carp between the water bodies. – Sarah Kocher/Albert Lea Tribune

Before the 2011 pump station installation and before the 2009 dredge the western part of Clear Lake, the Iowa DNR began contracting commercial fishing operations to do removals. These commercial coordinations began around 1980, Grummer said, and have been going relatively strong since then. The contractor who wins the bid has sole rights to remove rough fish — common carp and buffalo fish — there for three years.

“More years than not, we’ve had a contractor on Clear Lake,” he said.

Joe Mohn said the number of carp they catch has dropped quite a bit, but the weight of their seines, although somewhat lower, has not dropped as much. Ten years ago, he estimated the average fish pulled in was between five and seven pounds. Now, they’re closer to a 12- to 15-pound average, Joe Mohn said.

The process has changed, too, after the dredge. Grummer said the dredging removed some of the areas commercial fishers previously used to catch carp.

“After the dredge, it’s a lot — it’s harder for us to catch them, because the bottom … it’s not smooth anymore,” Joe Mohn said, also noting deeper water. 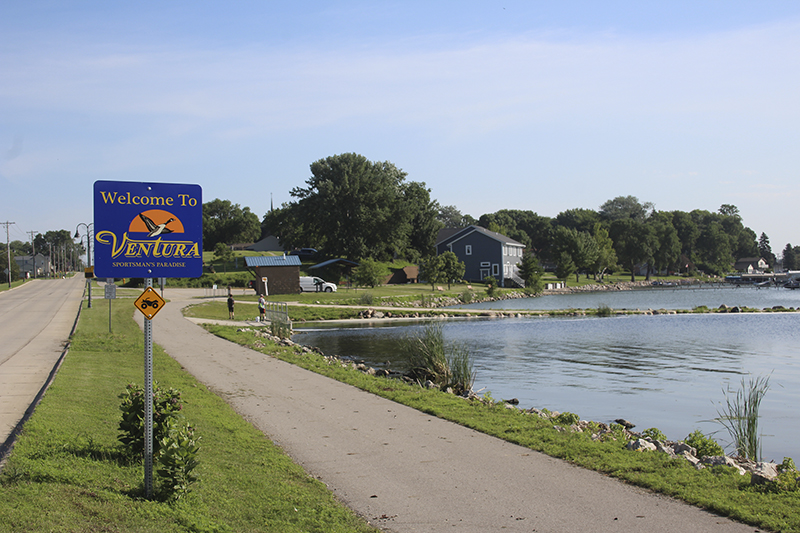 Ventura Marsh sits on the west end of Clear Lake, pictured, and is a key part of carp management for the lake. – Sarah Kocher/Albert Lea Tribune

To compensate some, the DNR can turn on the pump, creating a flow coming out of the marsh and into Clear Lake to entice common carp, who are drawn into the crescent-shaped bay by the flow and captured via seine net.

Some of the intel for good fishing holes are provided by the DNR to the commercial fisher on Clear Lake, Grummer said. That intel was gathered by a radio telemetry tagging project conducted with Iowa State University over 10 years ago.

“What we were trying to do with that research project in cooperation with Iowa State University was trying to figure out where the carp are seasonally to try to help commercial angling be more successful,” he said.

Grummer said most of the commercial activity is after ice-out on the lake, typically in April and May.

“What we do helps, but it’s a really small portion,” Joe Mohn said of the company’s role in Clear Lake carp management.

Another portion involved addressing another way carp were getting into Ventura Marsh: at the hands of hobby fishers.

In Iowa, it is legal to take rough fish, including common carp, by spearing, snagging or bowfishing. That had to change within the area of Ventura Marsh, Grummer said. At the fish barrier separating Ventura Marsh from the west end of Clear Lake, people had previously been able to fish carp out of one side — the Clear Lake side — and toss them into Ventura Marsh.

“At one point, they didn’t even have to move their feet,” Grummer said.

These regulations are intended to prevent people from hand-transporting fish into the marsh, Grummer said. 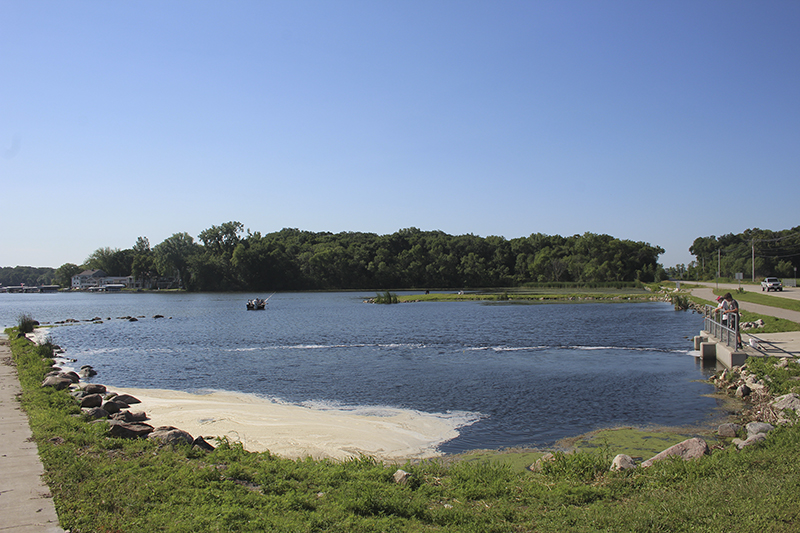 Fishers wait for a bite on the west end of Clear Lake. Ventura Marsh is on the opposite side of the road. – Sarah Kocher/Albert Lea Tribune

‘Seems to be working’

The DNR has set a target carp population for itself in Clear Lake: a biomass of under 100 pounds of common carp per acre.

It’s not quite there yet.

Grummer said the DNR has not conducted a biomass estimate for a number of years. The last accurate estimate taken was around 2010 coming out of the dredging, when the population weighed in at around 200 pounds per acre. In the future, efforts to drop that population center around reducing carp spawning.

“That’s where a lot of the work’s focused on,” Grummer said. “So, you’re kind of attacking them from a number of different ways. You’re removing the adult population, but yet trying to impact their reproduction so you don’t get as many new carp that are in the system and that, in combination, seems to be working.”

Grummer’s estimate of the lake’s average carp size was a bit larger than Joe Mohn’s coming in at approximately 15 to 18 pounds.

“That tells you that you don’t have a lot of young fish coming, which is good,” he said. “There’s clearer skies on the horizon.” 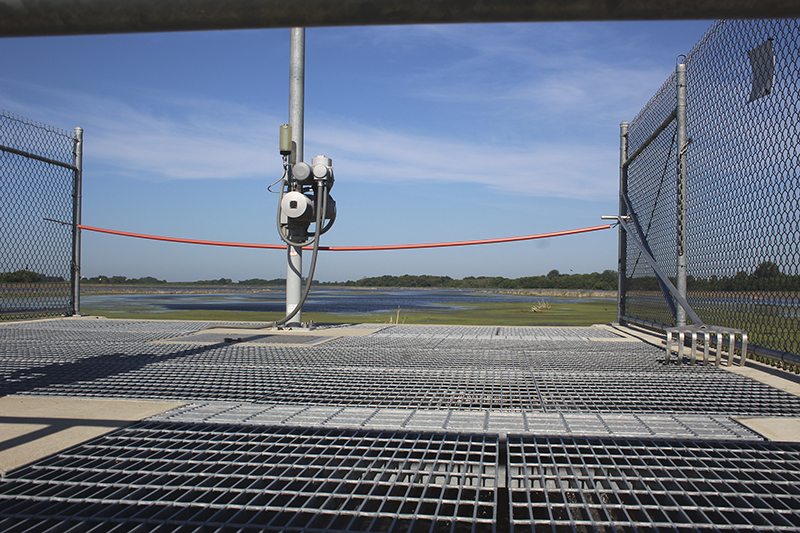 The pump station on Ventura Marsh is able to pump water both ways: out of Clear Lake or into it. Iowa DNR fisheries biologist Scott Grummer said the DNR can use the pumps, located under the grating, to draw down Ventura Marsh as needed to eliminate carp and restore vegetation. – Sarah Kocher/Albert Lea Tribune

‘Many different pages to the book’

As time passes at Clear Lake and Ventura Marsh, there have been more changes: Grummer said they’re seeing better water quality and water clarity, improved fisheries, more aquatic plants and less intense algae blooms. But as far as cause and effect is concerned, there isn’t one component Grummer can point a finger to.

“The restoration on Clear Lake has so many different pages to the book,” he said.

Larger, more noticable projects like the dredging and the pump station installation have been accompanied by numerous, smaller restorations.

“It’s really hard to say one thing relates to X amount of the changes,” Grummer said. “It’s kind of a whole picture.”

But that, along with collaboration with the city and county, is why it’s working.

“It’s been a multi-group partnership to do a whole lake restoration looking not only at stuff within the lake, but the whole watershed, so that’s what truly made that whole project a success is, you know, looking at the big picture — looking at every possible thing that can be done for restoration of the lake rather than, you know, just looking at one piece of the puzzle,” Grummer said. 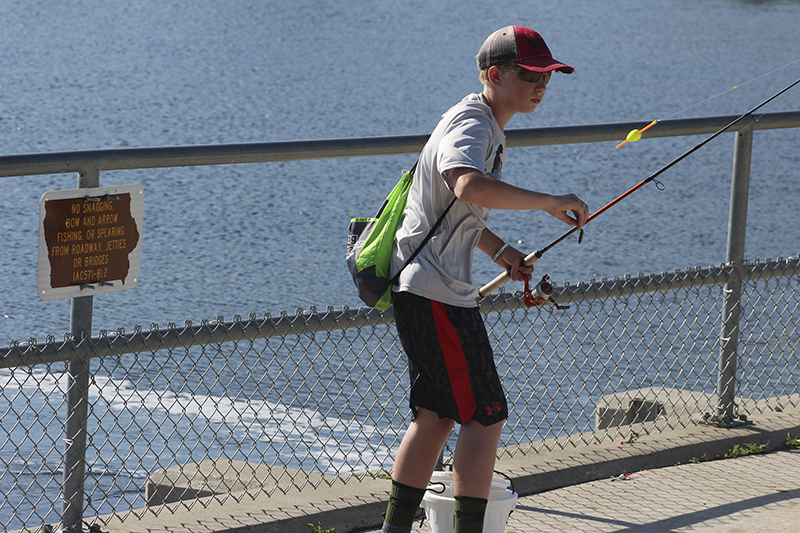 Read the first part of the series here.

Read the second part of the series here.

Read the third part of the series here.

Read the fourth part of the series here.

Read the fifth part of the series here.