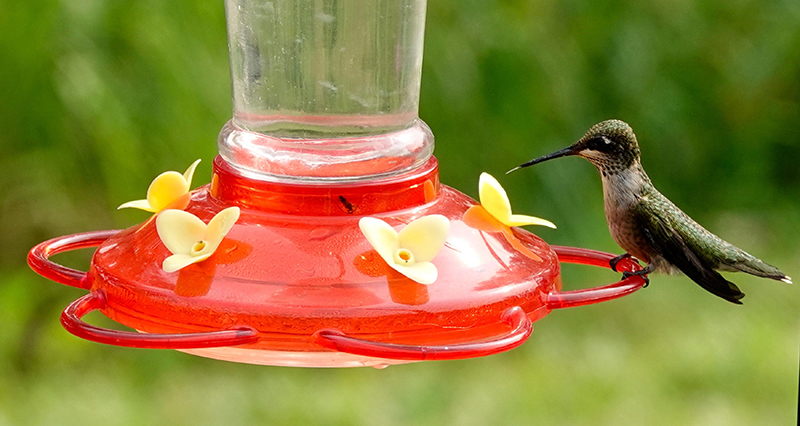 This hummingbird looked as if it had at least 942 feathers. Al Batt/Albert Lea Tribune

“Everything is nearly copacetic. I want you to know that you can borrow your lawn mower anytime you need it. Just put it back where you found it. Movies have become too loud for me. I wear earplugs when I go into a theater. My uncle Clarence stopped by. He was soaked. He wanted to clean out the inside of his car, so he went through the car wash with the windows down. Clarence doesn’t have all his teeth. When he loses one, he divides its duties among the remaining teeth. That’s OK. I think those with the fewest teeth have the most stories to tell. Watching him eat sweet corn is awesome sauce. He was quite a farmer. He got that from my grandfather. One year, the wind blew a cornstalk down and it totally demolished Grandpa’s house. He used to hitch his parked horses to a single alfalfa plant. His worst year was when the grasshoppers ate his barbed wire fence. Clarence loves the outdoors. That’s why he goes in the ‘out‘ doors whenever possible.”

The flowers were cheerful. The day was hot. I’m like most people — I’ll yield, maybe hold a bag of frozen peas to my neck, but I’ll not succumb to the heat.

Grape jelly feeders were still busy with Baltimore orioles. Birds are in a hurry as the local nesting season is compressed for our Neotropical migrants.

I saw a female cicada killer wasp. She was about 1 1/2 inches long. I wasn’t worried. Had I been a cicada, I’d have been worried.

Cooper’s hawks nest here, beginning their breeding season in the spring. They build nests of sticks lined with bark and green twigs located 25 to 50 feet high in a tree. She lays two to six eggs that hatch in 30 to 36 days. The young leave the nest after 27 to 34 days. The parents continue to feed and protect the fledglings until they learn to survive on their own at about 8 weeks of age.

A ruby-throated hummingbird buzzed by my beak. He probably weighed 0.1 ounce. About 1,000 to 1,500 of that being feathers, although one old study showed 940 feathers. That may not sound like many, but it’s more than I have.

“When do trumpeter swan cygnets begin the fly?“ It’s usually around 15 weeks, somewhere between 90 and 122 days after hatching.

A Mankato resident asked how long a cicada sings. The annual cicada (also called a dog-day cicada, harvest fly, jar fly and incorrectly a locust) produces a high-pitched, buzzy whine that reminds some of an electric saw. That’s why few people use cicada calls as ringtones on cellphones. This call hits 100 decibels, lasts up to 15 seconds and can be heard a quarter mile away.

“Someone told me that they found 27 dog collars in a bald eagle nest. Is this true?” Sounds ludicrous, doesn’t it? That’s because it is. It’s an internet legend claimed to have happened in many locations. If fish wore collars, it might be true. This isn’t to say that an eagle wouldn’t be capable of harming a small dog.

“How can I make it so smaller birds get to feed at the trough instead of grackles?” You could label the feeders accordingly, switch to safflowers, use hanging feeders with small perches that make it difficult for grackles to find foothold or cage the feeder with holes too small for grackles to get through.

“Why do mourning dove wings whistle when they fly from the ground?” A can of WD-40 would cure that. When mourning doves take flight, the tips of their flight feathers vibrate, causing the whistling sound. This isn’t uncommon in birds.

“Why am I seeing only male goldfinches at my feeder?” Goldfinches usually start nesting in July. They are getting food to bring to the females sitting on eggs. Males also bring food to the nestlings.

A Freeborn reader asked if they were mayflies or fishflies around Freeborn Lake. Some people call mayflies “fishflies.” A mayfly can be 2 inches long when including its cerci — appendages on the abdomen. Actual fishflies are usually an inch long and are related to Dobsonflies that can be 4 inches in length. Dobsonfly males have large mandibles. The insects I saw in great numbers at Arrowhead Point County Park were midges being eaten by cedar waxwings. Midges are delicate, mosquito-like insects 1/16 to 3/8 inch long. They’re gray, brown or green and don’t bite. The males have feathery antennae.

“May the gull of happiness follow you everywhere, without pooping on your head.” — Al Batt

“Life is the art of drawing without an eraser.” — John W. Gardner

Across the Pastor’s Desk: Strive to be gentle and peaceful