Austin man gets less than a month in jail for arson

An Austin man charged in connection with a January 2017 fire outside of Glenville that destroyed a shed and thousands of dollars in property was sentenced to less than one month in jail on Monday in Freeborn County District Court. 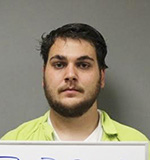 Jerimiah Coal Beaman, 19, was sentenced to 30 days in jail after he was convicted of third-degree arson. He was given credit for two days served, and two days were stayed while he serves probation for up to five years.

While on probation, Beaman will be expected to not possess firearms, ammunition, explosives, alcohol or drugs; obtain permission from his probation agent before leaving the state and follow other court requirements.

Beaman will be expected to pay $41,224 in restitution.

Court documents state Beaman was charged after a Freeborn County Sheriff’s Office deputy was dispatched Jan. 16, 2017, to abandoned property on 870th Avenue. Upon arrival, the deputy noticed a fully-engulfed barn.

Two silage wagons, four grain wagons, combine heads, 40 round bales, a silage wagon and a silage cutter were destroyed, with a total loss of $46,000. The barn’s estimated value was $50,000.