Al Batt: ‘Chilled but thrilled’ on a windy, below-freezing trip to Hawk Ridge 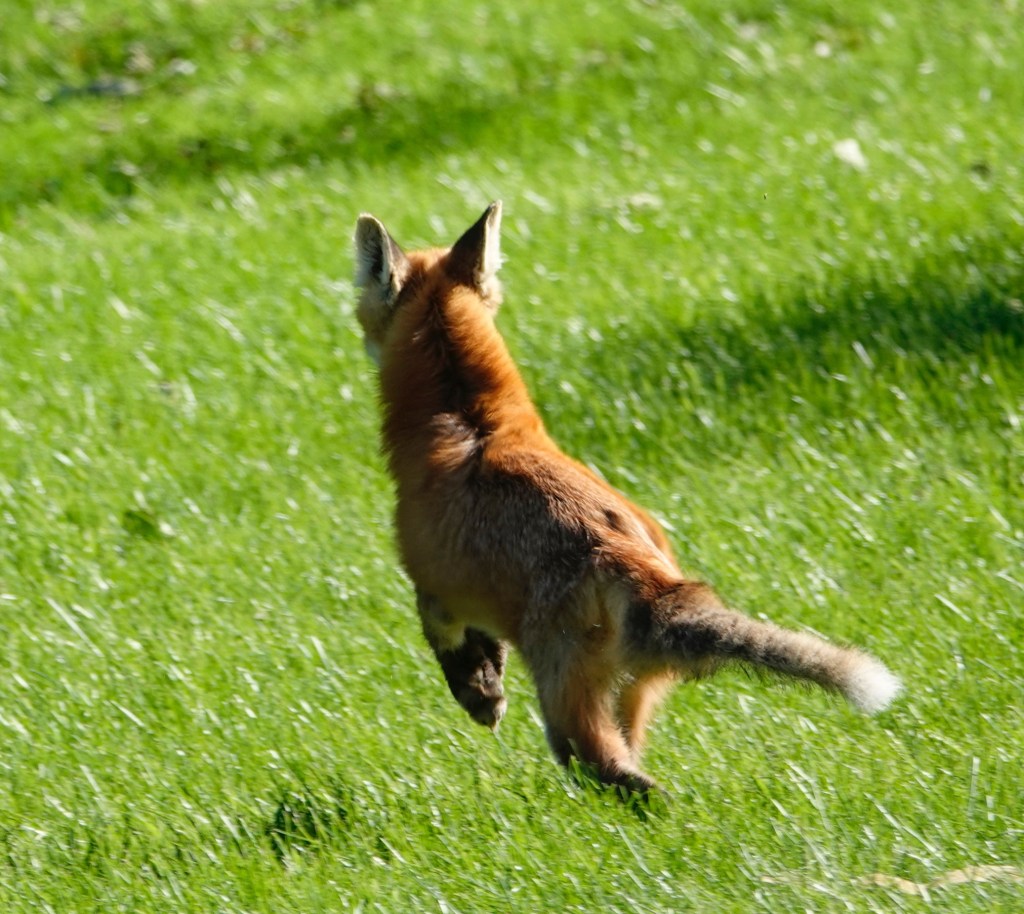 A Vulpes vulpes on the run can be identified by its white-tipped tail. Al Batt/Albert Lea Tribune

“Everything is nearly copacetic. I have a PTA meeting today.”

“You’re a member of the Parent-Teacher Association?” I say.

“No, PTA stands for Pool Table Activity. I’m a lifeguard at the third pool table from the rear at the Vole Club. There is no fancy GPS in my pickup. I have a weather vane instead, but I still get where I’m going, later than sooner. I may not know where I’m going, but the important thing is that I’m on my way. My Cousin Chalkie stopped over. He has a snazzy GPS in his truck. Chalkie used to milk 50 cows. Now he milks 500 cows, but he doesn’t seem 10 times happier. Pop had an operation and Chalkie stopped to give him spray cheese in a can with some crackers in the hopes it’d cheer Pop up. Pop thought his eye operation had been a failure, but it turned out he was wearing the eyepatch on the wrong eye.”

It was a nice enough day. The yard crows were laughing at fall’s mood swings. Crows are good at entertaining themselves. I wonder if crows have a favorite season? I like all 67 seasons that we have in Minnesota, but it’s difficult to find one more beautiful than autumn. Fall carries more gold in its pocket than does any other season. The first 32-degree day on average occurs Oct. 3 in Albert Lea, Oct. 5 in Mankato, Oct. 10 in the Twin Cities and Sept. 26 in St. Cloud.

I visited Hawk Ridge in Duluth on a below-freezing, windy, too-close-to-Lake-Superior kind of a day. Most folks were smart enough to wear winter clothing. Only one lunkhead wasn’t that bright. I wore a light jacket and was happy to have it, but could find only one glove in my car. It was a yellow work glove for my left hand. I wore it. It should have been a two-glove day. I was chilled, but thrilled with the birds seen at Hawk Ridge.

On the way home, a white-tailed deer ran in front of my car. We missed each other. A deer’s home range is around a square mile. Adult does weigh about 145 pounds and bucks about 170. The largest deer recorded in Minnesota was a 500-pound buck.

The second half of October brought five eastern bluebirds to my yard. I christened them the bluebirds of happiness, kindness, forgiveness, hopefulness and wellness.

A red fox is native to boreal and western portions of North America, but its origins are unknown in many lowland areas. Red foxes were absent from much of the East Coast at the time of European settlement, not becoming common until the mid-1800s. Vulpes is Latin for fox. Its scientific name, Vulpes vulpes, means, “fox fox.”

A lack of insects is bugging people

A report published in the “Proceedings of the National Academy of Sciences” documents another startling loss of insect abundance. Bradford Lister, a biologist at Rensselaer Polytechnic Institute, measured the resources of the Puerto Rican rainforest (insects and insectivores) in 1976. He returned nearly 40 years later with a colleague. What the scientists didn’t see troubled them. Fewer birds flitted overhead and butterflies, once abundant, had nearly vanished. Their study revealed a significant decrease in insect populations from 1976 to the present. Sample biomass decreased to 25 percent or less of what it had been. The catch rate in traps fell by 60 times. Insect-eating frog and bird numbers plummeted. Bird captures fell 50 percent. Lister attributes the crash to climate change.

“Does Minnesota have more common loons than other states?” It has more than any state except Alaska.

“When I was a child, something got into our hen house and killed many chickens. Why would a predator kill more than it could eat?” Surplus killing, excessive killing or henhouse syndrome is a common behavior exhibited by predators. They kill more prey than they can immediately eat and cache or abandon the remainder. Some animals that have been observed engaging in surplus killing include weasels, wolves, foxes, bears, coyotes, lynx, mink, raccoons, dogs, house cats and humans.

“The first fall of snow is not only an event, it is a magical event. You go to bed in one kind of a world and wake up in another quite different, and if this is not enchantment, then where is enchantment to be found?” — J.B. Priestley

“Instead of shooting arrows at someone else’s target, which I’ve never been very good at, I make my own target around wherever my arrow happens to have landed. You shoot your arrow and then you paint your bullseye around it, and therefore you have hit the target dead centre.” — Brian Eno