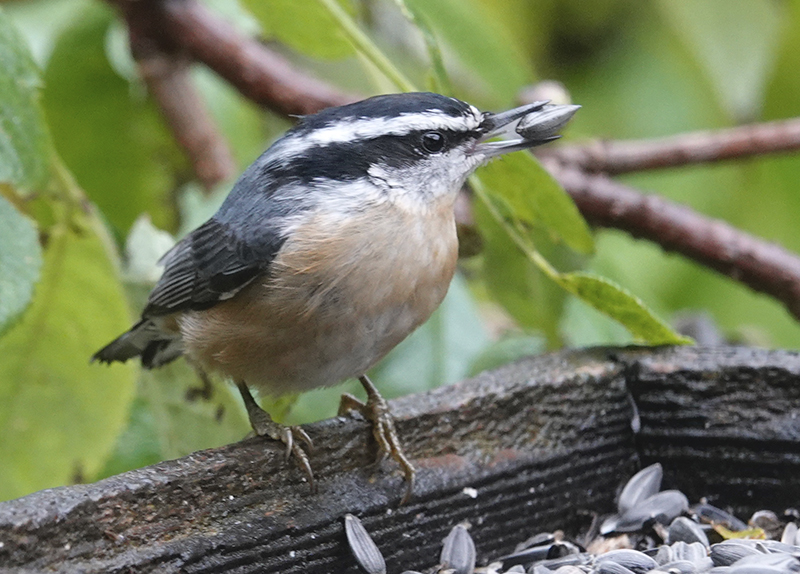 “Everything is nearly copacetic. I’m finer than frog’s hair. I had a tough day yesterday. I was headed down the highway and I had traffic backed up a mile behind me. It was my fault. The speed limit was 60 mph, and being a darn fool, I was going only 65. I drink eight glasses of water a day, so I’m always in a hurry, but I was driving that fast due to peer pressure. It’s difficult to get a decent look at corn at that speed. The other drivers glared at me as if I were a snail with rheumatism. They looked angry as they passed me. I can’t understand why anyone would be in such a hurry to get someplace they don’t want to go.”

Sweet music and sauerkraut! This year is hurrying by.

Red-breasted nuthatches make the yard smile. The tiny birds look as if they are smiling. Who can turn the world on with her smile? Mary Tyler Moore and a red-breasted nuthatch. I enjoy their nasal voices sounding like tiny horns. “Yank, yank,” they say. Red-breasted nuthatches are birds of coniferous woods, nesting among spruce, fir and hemlock. These nuthatches migrate southward earlier than many irruptive species, sometimes heading south in early July and reaching their southernmost point by September or October.

Ron Pittaway, an Ontario ornithologist, did a 2018-19 Winter Finch Forecast in which he collected data on the seasonal seed, berry and cone crops across Canada to determine if there are enough natural foods to sustain the birds in the northern forests or if the birds need to migrate south. Widespread crop failures, due to weather conditions or insect outbreaks, result in an irruption of birds. The Finch Forecast indicates we’re going to see lots of birds. Depending upon where you are, look for siskins, redpolls, crossbills and grosbeaks this winter.

I was asked to speak at Carrol Henderson’s retirement banquet. I’m unable to do so because of a prior engagement. Carrol has been the only director of the Minnesota DNR’s Nongame Wildlife Program since its inception in 1977. He was instrumental in the creation of the Chickadee Checkoff and spurred the recovery of bald eagles, trumpeter swans, peregrine falcons and river otters. Carrol has authored many books, including “Woodworking for Wildlife.” Minnesota is fortunate that he moved here from his home in Zearing, Iowa. I appreciate him more than I can say.

I enjoyed a waffle at a Waffle House in Columbia, Missouri, in the company of Columbia resident and avid birder Edge Wade. Edge is not only a wonderful person, she is the only Edge I know. We talked of birds and Edge related a tale of watching ravens in a tree in Alaska dropping sticks upon a bald eagle perched lower in the same tree. They continued until the eagle fled the scene.

I led a group to Hawk Ridge Nature Reserve in Duluth one rainy year. During the fall, migrating raptors concentrate in impressive numbers and funnel down the North Shore along the bluffs. We picked a day without inviting weather for raptor or birder. We got great looks at pouring rain. We spent enough time outside to see the rain up close. One of the members of our group, after listening to me bloviate on how to identify the nonexistent hawks, commented, “From where I sit, they all look like rain.”

“What weeds are most common in farm fields?” The Weed Science Society of America surveyed weed scientists across North America to find this out.

“How can I tell if it’s a horn or an antler?” Horns look like daggers (sometimes twisted) and antlers resemble branches with multiple points. Bovids (sheep, goats, cows, bison) have horns. Cervids (deer, elk, moose, caribou) have antlers. Horns are made of keratin, as our fingernails are. Antlers are made of bone and are shed annually. Horns usually grow on both sexes, while antlers are typically found only on males. Female caribou are an exception.

“When nothing seems to help, I go and look at a stonecutter hammering away at his rock, perhaps a hundred times without as much as a crack showing in it. Yet at the hundred and first blow it will split in two, and I know it was not that last blow that did it, but all that had gone before.” — Jacob A. Riis

“Animals are such agreeable friends — they ask no questions; they pass no criticisms.” — George Eliot