Health care is cited by people across the state as their top issue, according to District 27A Rep. Peggy Bennett.

Bennett, R-Albert Lea, is being challenged for re-election to her third term in the House by DFLer Terry Gjersvik. 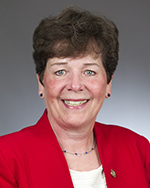 “Before the (health care law), Minnesota was known throughout the nation for our quality health care system,” she said. “Now premiums have skyrocketed, deductibles have quadrupled, rural communities are losing health care access and thousands of Minnesotans have lost their health care plans.”

She said she was the chief author on three pieces of legislation last session to help restore lost health care services to communities and reduce costs.

“One of those bipartisan bills, which created incentives for health care providers to locate in rural communities, made it into final legislation but was, sadly, vetoed by the governor,” Bennett said.

She said she has been in contact with a Kansas-based doctor to learn about direct primary care clinics, facilities she said have resulted in “drastically reduced health care costs — including pharmaceutical costs — for people.”

“I would like to look at bringing that option to Minnesota,” she said. “It’s important that people have more choices, because that means lower costs and better access to health care.”

Of Mayo Clinic Health System’s in-progress transition of most inpatient services from Albert Lea to Austin, Bennett said it has been “very stressful for many in our community and is not in the best interest of our local communities.”

“The loss of health care services in Albert Lea is highly concerning and a critical issue for our area,” she said.

Bennett said she has attended Save Our Healthcare meetings since the organization was founded following Mayo Clinic Health System announcing the transition in June 2017 to keep updated on constituent concerns and update the public on meetings with Mayo personnel and city and county leaders.

She said the legislation she authored would have addressed the transition.

“This is something I want to continue working on again next session,” she said.

“You can see the impact of this $5 billion legislation with all of the new road and bridge construction we’ve seen this past construction season,” she said.

Bennett said the investment was done by re-prioritizing auto-related taxes, such as taxes on auto parts, to a road and bridge account, a move that ensured the prevention of raising the gas tax, a revenue stream she said was “becoming outdated,”

“After all, vehicles are using less and less gasoline,” she said.

Bennett called the gas tax “highly regressive, hitting our middle- and lower-income people and our seniors the hardest; people who can’t afford to buy new cars or expensive, electronic cars.”

Bennett said the state needs to focus on funding transportation in Greater Minnesota and the Twin Cities.

Bennett said she has “spoken at length with many child care providers in our area and throughout the state.”

“What I hear from many of them is that, had the regulatory climate today been what it was 20 years ago when they got into the business, they would have never entered child care in the first place,” she said. “We are witnessing first-hand what an out-of-control regulatory atmosphere — endless paperwork and bureaucratic nightmares — can do to an industry.”

Bennett said a local day care provider was cited for having “too prickly grass.”

She said the Legislature enacted “several common-sense changes to reduce unnecessary paperwork requirements and other layers of red tape.”

“We need to delve into regulation reform even more in this area,” Bennett said. “All these extra rules drive up costs, which diverts funding away from day care providers’ financial bottom line.”

Bennett called regulatory reform “only one aspect of the issue of the child care shortage.”

“There is no silver bullet,” she said. “State and local leaders need to think innovatively, looking at ideas, from tax credits for business that offer child care for their employees to forming local child care cooperatives to help save on overhead costs like health care.”

Bennett said the education system needs to be focused on to address the workforce shortage.

“For too long, our education system has moved toward downplaying the trades side of education and funneled the majority of students toward four-year colleges,” she said. “We are now finding that this was a mistake and we need to go back to a more balanced education system.”

Bennett authored a bill last legislative session that would have given public schools more flexible hours to teach trades such as welding and carpentry, which was later vetoed by Gov. Mark Dayton.

She said she wants to work on the legislation again next session “to provide students with more (opportunities) for varied education options like this.”

Bennett also supports increasing partnerships between businesses and schools on programs such as apprenticeships.

“No one student learns the same way or has the same educational needs,” she said. “We need to make sure our system is flexible enough to provide opportunity for all.”

Bennett called Dayton’s veto of the two tax bills legislators handed him last spring “a great disappointment.” She said she did not know why he vetoed the second tax bill after emergency school funding not included in the first bill was included.

“Whether he vetoed it because of politics or other reasons, I don’t know,” she said. “He could not articulate his reasons in a press conference right after his veto. I feel bad because it hurts a lot of people.”

Bennett said she supports tax decreases because of the good condition of the state economy and continued budget surpluses.

She said before she was elected, the DFL-controlled Legislature raised taxes by $2.1 billion.

“All that does is hurt people and stifle our local businesses,” she said.

“Law-abiding citizens have the right to own guns and defend themselves,” Bennett said.

To Bennett, “strong gun laws” are in place in the state.

“I do not see any one, broad gun-control restriction that could make a difference, but those restrictions would certainly make it much more difficult for law-abiding citizens to purchase and own guns,” she said.

Bennett said two-thirds of gun deaths in the United States are caused by suicides, with the next largest portion mainly being gang homicides.

Bennett authored a bill for school-linked mental health grants that would have provided more access to mental health services for rural schools.

“We need to give schools the mental health tools they need to address troubled children,” she said.

Bennett co-authored a bill that would have mandated hands-free devices for drivers when making calls.

“Unfortunately, there were parts of the bill that had issues and unanswered questions, and it still needs to be worked on before it will be ready to come to the floor for a vote,” she said. “We need to make sure we get it right before enacting it into law.”

Bennett said she supports companies with policies requiring employees to have handsets or other requirements.

“Texting while driving is a serious issue — just like drinking and driving — and so I believe this needs to be addressed,” she said. “Some believe the answer is a hands-free bill similar to the one I co-authored. Others believe we could address this by significantly increasing the penalties for hurting or killing people when texting/internet surfing while driving.

“We need to pick the best way for Minnesota to deal with this issue and get it done.”

Bennett said the experience and seniority she has developed in the Legislature “is a huge asset.”

“I have learned so much during my past two terms as our representative, both about our area and also how to get work done in the Legislature.”

“I have developed good working relationships with legislative colleagues on both sides of the aisle, which now gives me opportunity to work together and get things accomplished,” she said. “The seniority I’m developing adds additional influence.”

Bennett said she loves people, and one of her favorite parts of being a representative is visiting with people at events.

“People are the most important part of government, and that the best ideas come from those who are living and working right here at home,” she said. “That’s why I get out into our communities year round to hear from people.”

“We need to bring back common sense to our government agencies,” Bennett said. “Overregulation is hurting individuals, farmers and businesses.”

Bennett cited the Federal Aviation Administration’s shift from penalties and fines — unless it endangers the lives of others — to education and training, as proof other agencies can do the same.

“We need to look at moving our Minnesota regulatory agencies to come alongside individuals and businesses to educate and train — to help them be successful — instead of the heavy-handed penalty producers that many agencies are now,” she said.

“I am working on bills that will reduce nonsense regulation and bring our agencies back to doing what they are supposed to do: serve the people.”

Bennett said she has a proven ability to work bipartisanly, noting nearly every bill she has authored has been bipartisan, and she has co-authored bills with DFLers.

“I have developed a mutually respectful relationship with my colleagues across the aisle as well as with those of my own party, and that has made it possible for me to work well with both sides,” she said. “I am always willing to look for legislation that both sides can agree upon.”