Newcomer hopes to bring fresh views to school board

Similar student experiences from a school board hopeful’s life feed into the philosophy and priorities he will bring to the school board. 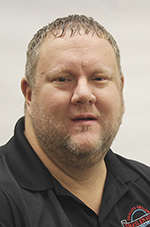 Brian Anderson, who is running for a position on the Albert Lea Area Schools board, said his experience in management and customer service, as well as his personal history with poverty and post-secondary choices, will help him bring a unique and fresh perspective to the board.

“The board needs diversity and should thrive on the viewpoints of many people from different backgrounds,” Anderson said.

Anderson said he grew up with five younger siblings as a student who ate free lunch at school. He said students today are cynical about education as they may look ahead to student loan debt.

“We need to keep these students engaged, so that means education must be seen as a pathway out of poverty,” he said. According to Anderson, that pathway could be vocational skills or job training for those not wanting the college experience, and further College in the Schools opportunities and community scholarships for those who do.

The College in the Schools program is a high note for the district and should be continually expanded, he said, as should Advanced Placement courses. Anderson said these programs can help assuage the rising cost of education. He also encouraged the district to expand its on-the-job training offerings.

Anderson did not attend a four-year college, which he said distinguishes him from other board members and puts him in a similar league to many students today.

In regards to facilities, that perspective also includes frugality.

“We need to be good stewards of the community’s money, and sometimes frugality is what people want to see,” Anderson said. “I’m sure many people would love an expensive new rec room in their homes, but they choose not to spend that kind of money. Meanwhile, the school board is offering them an all-or-nothing choice when it comes to most improvements.”

Albert Lea residents are weary of property tax increases, he said. He forecasted a difficult time in upcoming years for the board with rising expenses and evolving student needs.

“Education is meant to be viewed from the bottom up with students’ needs held above everything else,” he said. “If the community believes money is spent with that goal in mind, I believe they will continue to support our schools and future levies that may become necessary. Transparency and accountability will be the key.”

Anderson said he doesn’t believe many people think about the school board’s doings until it levies. This is why school board members should be accessible: so people know what is happening on the board and can decide whether they feel money is being spent for the sake of children.

And while the district can also support teachers through competitive compensation packages, Anderson said employee retention comes from making people feel valued, appreciated and listened to.

According to Anderson, he would come to the school board with no agenda. He said his time managing young people means he has a knack for seeing things from their point of view.

“The school board should always strive to be in a state of renewal and try to see things as our student see the world,” he said.