An Albert Lea City Council candidate is calling for the city to be more transparent in its decision-making processes. 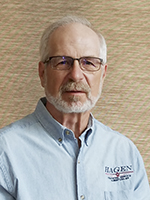 “As I talk to people, there seems to be a (recurring) theme, which is, ‘Why get involved? They – the city fathers — have already made a decision and they won’t listen to us anyway?’ That sort of mentality has to be changed through openness, transparency and accountability.”

Hagen said because they pay taxes, taxpayers need to be listened to by the council.

“Especially at the local level, we have to elect representatives who represent our values and are responsive to our input, our needs versus wants and their affordability,” he said.

To Hagen, more transparency is needed in city financial transactions. He said as a business owner, he knows business finance, and he called the city’s finances “questionable.”

He said it is difficult to decipher whether the correct decisions are being made and if they are sustainable.

“I believe the council, as citizen representatives, needs better and more explicit explanations as to how our spending will affect fees and taxes imposed on our citizens,” he said.

“Whether it is fees or a levy, if you steal money from one area and move it to another to make your numbers sound good, in the end it will still cost the taxpayer more money.”

Hagen called health care affordability and costs top issues facing Albert Lea and said mental illness is “at a crisis level in our country and needs to be addressed.”

“If Mayo can bring top-notch care to these people in need and help them, we should embrace it and the local jobs it will create,” he said. “Any specific type of care that we lost in Mayo’s transitioning departments away from our community, we need to replace through other health care providers.”

Hagen called for the city to continue speaking with other health care providers and entice them to the market “through proof of sustainability and possibly offering financial incentives, if that’s the direction we choose.”

“This is a very costly venture,” he said. “Even if we could afford it, and it is where we want to spend our tax dollars, it would need to be controlled by a board of qualified doctors working with financial advisers for accountability and success. It will take everyone working together to get us the care we need.”

Hagen said though not all areas of government can be run like a business, in departments that can, officials sometimes need to increase rates for their use so they no longer operate at a loss.

“If an explanation for their operating at a loss is the quality of life they provide, is it a quality of life provided to every taxpayer proportionately, and if not, how is it justified?” he said. “Department budgets need to be realistic and show the actual costs of that department, and not some hybrid version that favors one department over some other department based on perceived associated costs of indirect services provided,” he said.

To Hagen, the city needs to either increase its tax base or control spending to “get a handle on high taxes.”

Hagen said the city needs to “work even harder to promote our city and its assets.”

“Which are our citizens, young and old alike, the local businesses that provide employment to so many of our citizens, our beautiful lakes and parks and our proximity to the intersection of two major interstates,” he said.

Hagen said the city needs to use its local entrepreneurs to meet its potential.

“We, as a city, need to be a positive influence and not a hindrance to our local business’ successes,” he said.

Hagen suggested the city work with businesses to find their needs and vendors. Based on that, Hagen said he plans to try to bring businesses and vendor warehousing or distribution centers to Albert Lea based on its location on interstates 35 and 90.

“Based on our location, we also need to look at anything transportation-related, trucking company terminals, truck and trailer sales, repair and cleaning and help those businesses expand,” he said.

Hagen said the job climate within the city government has changed.

“Today, rules and policies are not followed,” he said. “Favoritism exists, and advancement is not based on years of service and qualifications. Some positions today require a degree, when in reality you would have a better employee in someone who has hands-on training and is taught or who knows the specifics of a job.”

Hagen, who owns his business, Hagen Trucking Services, said he has 46 years of experience in the transportation industry, and he believes his greatest asset to the council “is my success in business and life in general.”

“From where I started in life to where I am today has been a long journey,” he said. “I have learned a lot about myself and others along the way. I have learned in order to be positive, you have to eliminate the negatives in your life. You always have to be prepared for the rainy day financially and emotionally, work hard, surround yourself with people you trust and can learn from and always look to the future.”

Hagen called a lack of road funding “a major issue in our city and county.” He said the city needs to continue lobbying the Legislature for more funds for Greater Minnesota and called for a larger portion of fuel taxes and other vehicle taxes paid locally to be invested in Albert Lea.

“We need to prioritize our infrastructure needs and spend accordingly,” he said.

Communication with other government boards

Hagen said he believes communication between the City Council and other tax levying entities needs to happen at “regular intervals.”

He called for major projects to be discussed and prioritized “so that the taxpayer is not overwhelmed by assessments or fees.”