The Moorhead Police Department announced that a woman wanted on a felony kidnapping warrant out of Mower County was arrested Tuesday morning in Moorhead. 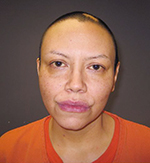 According to a news release, the Moorhead Police Department, with assistance from the Minnesota Bureau of Criminal Apprehension, the Clay County Sheriff’s Office and the Metro Street Crimes Unit, executed a search warrant at 10:50 a.m. Tuesday at 1213 Main Ave. in Moorhead. Izetta Cooley, 39, and four of her children were located inside.

Cooley, who is not allowed contact with her children via a court order, became a kidnapping suspect after it was reported she took her children Saturday night from a Rose Creek residence where they were staying. Authorities were concerned for their safety.

Cooley’s husband, 44-year-old Miguel Jay Cooley of Moorhead, is accused of fatally shooting 20-year-old Gabriel Perez outside a McDonald’s restaurant in Fargo, North Dakota, on Sept. 23. Miguel Cooley was arrested in Rose Creek on Sept. 24 and is currently in the Mower County Jail.

A fifth child, 17-year-old Morgan Cooley, is still missing. Anyone with information on Morgan Cooley’s whereabouts is urged to call the Mower County Law Enforcement Center at 507-437-9400 or dial 911.