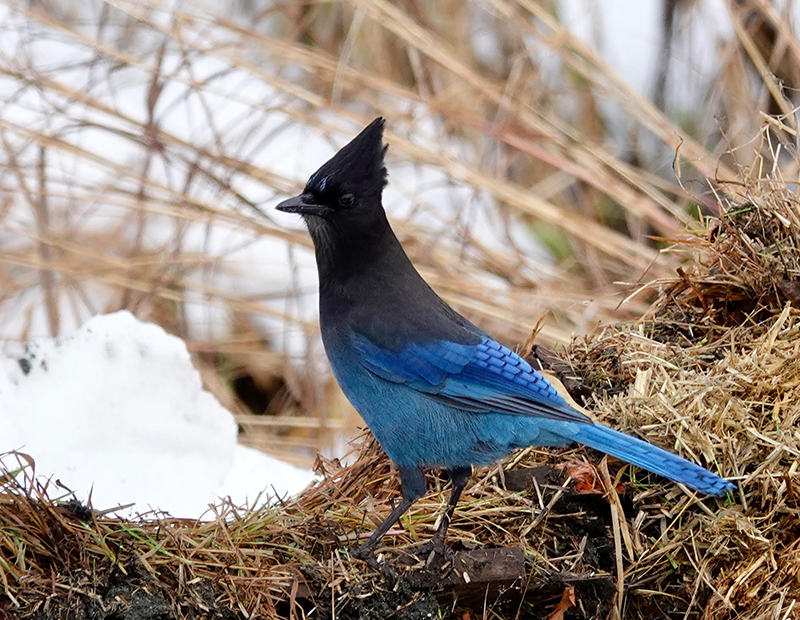 A Steller’s jay seen in Alaska. The name Steller’s makes this one of the most often misspelled bird names. - Al Batt/Albert Lea Tribune

“Everything is nearly copacetic. Overall, I’m not too shabby. There are days when I wish I lived some place where I could shovel the snow from my driveway with my hat. Thanksgiving was a good one. I can tell by the weight gain. I was reminded once again that stuffing and green bean salad are what you eat when you run out of mashed potatoes and gravy. I forgot to make a list of things to do today, so I’m feeling listless. That gave me time to think about hunting with my grandfather. Grandpa was a character. He chewed tobacco because it saved on matches. We hunted rabbits without using a gun. I’d dig a hole and he’d drop a rock into it. Then we’d wait until we saw a rabbit. I’d shout and wave my arms at the critter. This scared the bunny enough that it looked for a place to hide. When the rabbit saw that hole, it jumped into it, hit its head on the rock and knocked itself out.”

November isn’t the favorite color of many. We have an average of 39 percent of possible sunshine in November, our cloudiest month. December, the second cloudiest month, gives us 42 percent. The two months save us money on sunscreen.

There is the “Farmers’ Almanac” from Lewiston, Maine, and there is the “Old Farmer’s Almanac” from Dublin, New Hampshire. The two publications are useful and entertaining, and make great gifts. They serve as reminders that I need to get out there and enjoy nature.

Going outside and staying a while

“Why did you go to Alaska?” a friend asked.

“No, Haines is a beautiful city and borough in southeast Alaska.”

“What do you go there for if you’re not looking at underwear being made?”

“You can see them here.”

“True, but the ones I see here aren’t in Haines, Alaska. Haines is a place where when I go outside, I want to stay outside. That’s the way I was as a boy. Haines helps me remember that.”

That said, I have Minnesota between my toes and that suits me.

The road, tucked between mountains and a river, twisted toward road construction and bald eagles feeding upon spawned-out chum salmon. The natural phenomenon responsible for five miles of open water during freezing months is called an alluvial fan reservoir. Water there remains 10 to 20 degrees warmer than surrounding water. The warmer water percolates into the Chilkat River in Haines, Alaska, and keeps it from freezing. In 1917, the Territorial Council initiated a bounty on bald eagles, blamed for having a negative effect upon the salmon industry. Beginning at $1 per pair of feet, the bounty was raised to $2. By the time the bounty was discontinued in 1953, over 128,000 eagles had been killed. When Alaska achieved statehood in 1959, the bald eagle became protected under the Bald Eagle Protection Act of 1940.

There was a lone bird against the sky: a raven watching as a bald eagle plucked a merganser from water filled with salmon. It apparently had grown weary of eating salmon.

“Why are some moths called millers?” The wings of the moths are covered with fine scales that rub off when touched. They look similar to the fine powder found on a flour mill worker’s clothing.

“Do hedge apples repel spiders? The yellow-green grapefruit-sized fruits are also called Osage oranges, hedge balls, horse apples, green brains, monkey balls or mock oranges. The hedge apple tree, related to the mulberry, has several names including Osage orange, bodark or Maclura pomifera. Early settlers found the Osage orange useful. Because of its thorny branches, it was planted as a living fence that made an effective barrier for livestock. The wood was used as fence posts, furniture, archery bows, nails and firewood. Do hedge apples repel spiders, insects or mice? The fruits are sold in supermarkets for that purpose. Iowa State researchers extracted compounds from hedge apples that were found to repel insects when concentrated. However, the scientists reported the natural concentrations of these compounds in hedge apples were too low to be an effective repellent. I’ve tromped around fallen hedge apples in the company of spiders and insects many times. Hedge apples do repel if you throw them at the spiders.

“There are two ways of spreading light: to be the candle or the mirror that reflects it.” — Edith Wharton

“The lost leaves measure our years; they are gone as the days are gone.” — Richard Jefferies.