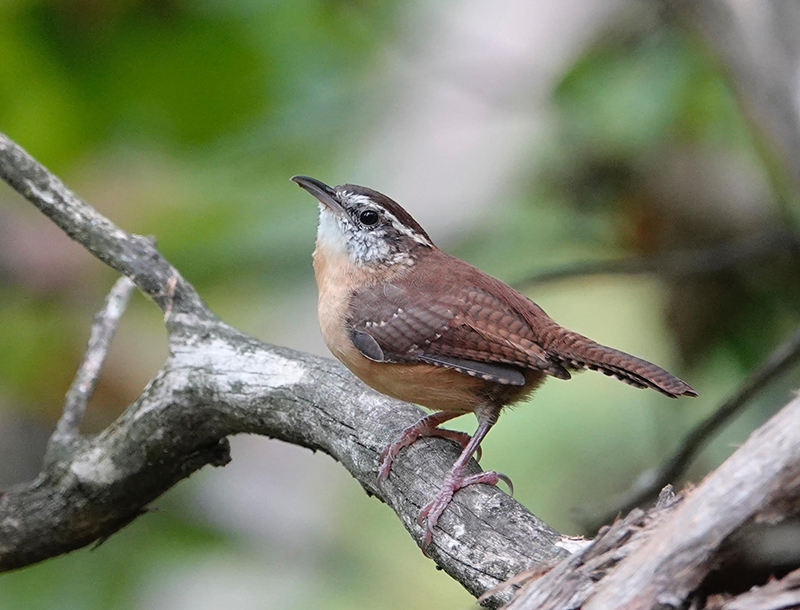 “Everything is nearly copacetic. My philosophy is limited to the lyrics from the songs of The Rolling Stones and lines from old movies, but I believe every time I hear a mousetrap snap, an angel gets a mouse. I should feel sorry for the mice. After all, I’ve been caught. I remember it being around this time of the year when I got caught eating a Butterfinger candy bar in class. The Butterfinger was the last remaining survivor of my Halloween candy. Mrs. Bach asked if I’d brought enough candy for everybody. I said, ‘Where are we living, in the Soviet Union?’”

“I remember that. You took a big note home from school that day,” I say.

I moseyed along a lovely trail at the Columbia Audubon Nature Sanctuary in Columbia, Missouri. I walked in on a Carolina wren concert. A pair bond can form between Carolina wrens at any time of the year and they usually mate for life. A pair stays together all year and forage on their territory together.

The 2019 Farmers’ Almanac — not The Old Farmers’ Almanac — predicts a colder-than-normal winter from the Continental Divide east through the Appalachians. The Farmers’ Almanac, in Lewiston, Maine, bases its long-range forecasts on a mathematical and astronomical formula developed in 1818, also predicts above-normal precipitation (much snow) for the Midwest, with the majority of it falling in January and February. The teeth-chattering cold is to arrive mid-February.

“What are the three sisters?” Corn, beans, and squash. Native Americans found this trio thrived when planted together. In legend, the plants were gifts from the gods to be grown together, eaten together and celebrated together. The corn offers the beans support. The beans pull nitrogen from the air and into the soil for the benefit of all three. The large leaves of the sprawling squash protect the others by creating a living mulch shading the soil while keeping it cool and moist, and limiting weeds.

“Were dodos really stupid?” No. Dodos were thought stupid because they were comfortable around humans and were easily hunted on their native island of Mauritius. Their trusting nature and the introduction of invasive species wiped them out a century after they were discovered. Dodos had a similar brain-to-body size ratio to that of pigeons, which demonstrate an ability to be trained.

“What is the world’s largest songbird?” The common raven.

“Do bats have hollow bones?” Unlike most birds, which have hollow bones, the bones of bats aren’t hollow, but are typically small and delicate. The bones of their wings are lengthened to provide support for the wing membranes. Bats make up one-fifth of the mammal population on Earth according to Bat Conservation International.

“How can I identify common buckthorn?” The leaves remain green in the fall. Buckthorn has three or four upward curving veins on each side of the mid-vein. When veins curve at the ends as they approach the leaf margin, the leaves are called arcuate. The leaf margin or edges of the leaf are slightly serrated or toothed. Buckthorn berries are found only on mature female plants and become purple to purple-black in late summer to early fall. Each berry contain three to four seeds and the stem attaches directly to the twig. Berries of native species like chokecherry or black cherry are grouped and have a single seed each. Non-chemical buckthorn control options include cutting the tree and covering the cut stump with a tin can or black plastic to prevent re-sprouting. Use nails to affix the can or a tie to affix the black plastic and leave in place for one or two years.

“Now is the time of the illuminated woods; they have a sense of sunshine, even on a cloudy day, given by the yellow foliage; every leaf glows like a tiny lamp; one walks through their lighted halls with a curious enjoyment.” — John Burroughs, from “The Heart of Burrough’s Journals”

“When small men begin to cast big shadows, it means that the sun is about to set.“ — Lin Yutang