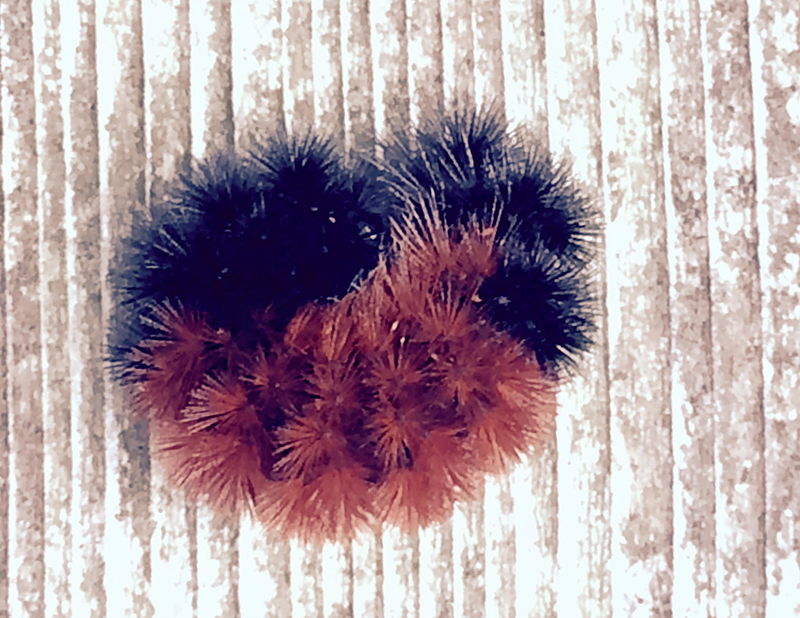 The number of brown hairs has to do with the age of the woolly bear caterpillar. Al Batt/Albert Lea Tribune

“Everything is nearly copacetic. I got my Ford Fiasco out of mothballs and drove it towards town. The car surprised me by completing the trip. I met the Fiasco the year my Slinky lost the spring in its step. I went to the theater and was nearly frightened into the next county.”

“No, it was the price of the candy that scared me 57 percent to death. Oh, I’ve been seeing woolly bear caterpillars.”

“Ah, if the rusty band is wide, then it will be a mild winter. The more black there is, the more severe the winter. What kind of winter do the woolly worms foretell for us?” I ask.

“We’ll definitely have one.”

The crows cawed in the morning. I am pro crow. I figure if crows do well, so will my family.

Rich Greene of New Ulm told me that he was seated at a table outside a cafe, enjoying a scone. A robin landed on his shoulder. What else could a man do but share his scone with a guest?

I spoke in Duluth and spent the night at the home of Cindy and Chris Edwardson. Those wonderful hosts needed to take their bird feeders in each night because of a marauding black bear.

David Livengood of Silver Spring, Maryland, told me that there was a female cowbird that landed on the outside mirror of David’s car each day. The bird looked at itself in the mirror and then pooped on it.

A cardinal goes through a full molt in the fall. The male’s new feathers come with brown tips that wear away over winter, leaving them bright red in the spring. A cardinal gets its red plumage from pigments called carotenoids obtained from sunflower and safflower seeds, apples, dogwood berries, grapes, raspberries, rose hips and others. Carotenoids produce red, orange or yellow feathers.

“How many broods will a mourning dove have in this country?” One to six clutches per year depending on location and weather.

“Do birders name their children after birds?” I suppose. Many humans carry bird names — Jay, Martin and Robin. I played basketball against Meadowlark Lemon once. It was almost fun. I named a dog Towhee. I look forward to meeting my first little kids named Gnatcatcher, Pyrrhuloxia and Curlew.

“When did vultures first appear in Minnesota?” T.S. Roberts, a physician known for his work in ornithology, reported that the turkey vulture, formerly more common, was still seen in fair numbers throughout the state in 1932. He cited several accounts from the late 1800s that indicated the species was abundant throughout many parts of Minnesota. He described them as abundant in east-central Minnesota in 1870; very common in the Red River valley in 1885; and seen every hour in the day in Otter Tail County in 1893. A stronghold was southeastern Minnesota — along the Mississippi River and along the St. Croix River. The word vulture likely comes from the Latin vellere, which means to pluck or tear. Its scientific name, Cathartes aura, means either “golden purifier” or “purifying (cleansing) breeze.” In the old cowboy movies, vultures were called buzzards, a colloquial term for vultures, which applies to several hawk species in Europe. Turkey vultures enjoy road-killed food between fresh and bloat. On the chemists’ 0-14 pH scale, seven is neutral like pure water. The extremes are toxic. High numbers are alkaline; ammonia measures 11 and bleach 12.

Low numbers are acidic — lemon juice or sulfuric acid. Vultures can eat just about anything without suffering harm. The main reason they can do that is they have the lowest gastric pH in the animal kingdom. Stomach acid protects animals because it digests bacteria and other living organisms. Turkey vulture stomach acid has a pH slightly above zero. This is lower than that of a car battery. It could dissolve metal, as well as digest nearly all organisms, including those causing anthrax, botulism, cholera, hepatitis, polio and rabies. Their appetites help prevent the spread of disease to humans and other animals.

“How long does a bumble bee live?” The lifespan of a worker bee is two to six weeks (28 days on average). They die with the first hard frost. Bumble bees rely on the queen to live through the winter and renew the population in the spring. A queen mates in the fall and then finds an underground hibernaculum to spend the winter. On average, a bumble bee queen lives about a year.

“No one is dumb who is curious. The people who don’t ask questions remain clueless throughout their lives.” — Neil deGrasse Tyson

“Delicious autumn! My very soul is wedded to it, and if I were a bird I would fly about the earth seeking the successive autumns.” — George Eliot