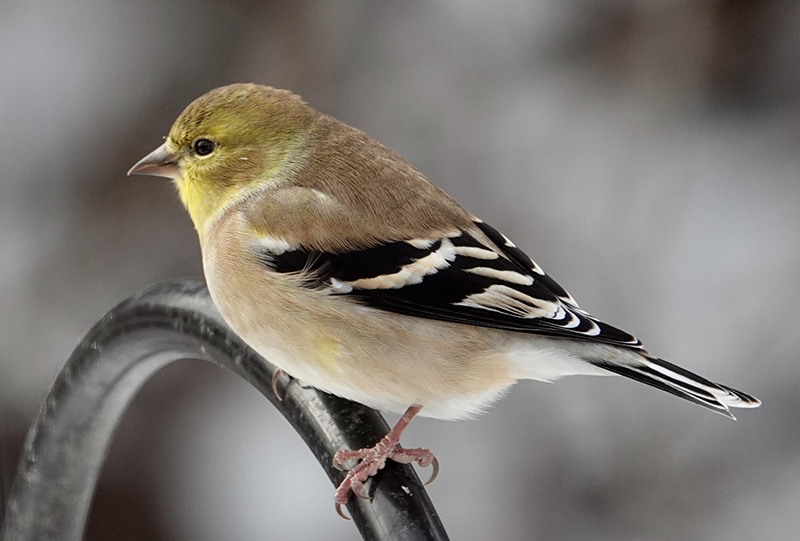 “Everything is nearly copacetic. I’m so busy, I had no time for a shower today. I had to spit into the air and walk under it.”

“Thanks for sharing that. I had fun at your father’s birthday party,” I say.

“I had to get a permit to light all the candles on Pop’s cake. I told Pop that and he called me an aperture in the hindquarters. Ma has a dog that’s a cross between a Chihuahua and a gerbil. It jumped on Ma’s piano to chase the cat. It tiptoed on the keys. That mutt’s Bach was worse than its bite. I planned on getting my Christmas shopping done early this year. I love going into stores. Where else would I go to the bathroom when I’m out? My old truck gets terrible mileage. One frigid day, I left it running while I filled it with gas. The pump couldn’t keep up with the amount of fuel being consumed. That puts a crimp in my Christmas spending. That means I’ll probably give everyone the same thing I give them every Christmas — an apology.”

I walked the sidewalks of a small city. The stroll was an icy one, so I quoted a chickadee. Chickadees make a chickadee-dee-dee call and increase the number of dee notes when they are alarmed. Blue jays flew from yard to yard. They sampled the fare at various bird feeders as if they were running a trap line. The jays share one belief with all other jays: Jays are wonderful.

“You cautioned against using honey in hummingbird feeders. Why?” You should use table sugar rather than honey to make hummingbird nectar because when honey is diluted with water, bacteria and fungus thrive in it. The normal mixture is ¼ cup of sugar per cup of water. In cold, rainy or foggy conditions, it’s OK to make the mixture 1/3 cup of sugar per cup of water. Concentrations of sugars in natural nectars vary within that range. If you mix small quantities of sugar water every day or two, there’s no need to boil the water. If you mix up a larger batch and refrigerate it for later use, it’s wise to make the mixture with boiling water.

“What do golden eagles eat?” A golden eagle preys primarily on mammals such as rabbits, hares and rodents. Up to 20 percent of its diet are birds and reptiles. It feeds mostly on food it catches, but will eat carrion.

“Why do some Canada geese migrate so late?” Some Canada geese don’t migrate at all. They are short distance migrants, so temperature and the resulting iced-covered water can influence their timing.

“Don’t deer eat ferns?” Deer eat most any plant if they are hungry enough. However, ferns and some ornamental grasses aren’t their preferred fare.

“What kind of bird is a snowflake?” Sometimes called “snowflakes,” snow buntings resemble snowflakes as they swirl through the air before settling on winter fields.

“Is there a national mammal?” In May 2016, President Obama signed the National Bison Legacy Act into law, which made the American bison the national mammal of the United States. Once, 20 to 30 million bison roamed North America. Because of unregulated shooting and habitat loss, that population had dropped to only 1,091 by 1889.

“Are there any bird-friendly sports arenas?” A new arena named the Fiserv Forum, where the Milwaukee Bucks play, has been proclaimed the world’s first bird-friendly sports and entertainment venue. This is a victory for bird conservation because up to 1 billion birds in the United States die annually due to glass collisions. Scientists estimate that this total accounts for 5 to 10 percent of the bird population in this country. Addressing this destruction is vitally important, not only because of the inherent value of birds, but also because birds reduce pest populations, pollinate plants, disperse seeds and captivate millions of people with their breathtaking beauty and fascinating behavior. The Fiserv Forum has set a new precedent for bird-friendly building design.

“I think reading is a gift. It was a gift that was given to me as a child by many people, and now as an adult and a writer, I’m trying to give a little of it back to others. It’s one of the greatest pleasures I know.” — Ann M. Martin

“I go out into the woods; and every bird and flower I see stirs me to the heart with something, I do not know what it is; only I love: I love them with all my strength.”  — Ernest Seton Thompson