Al Batt: Bearded lady turkeys exist in the wild, though less than common 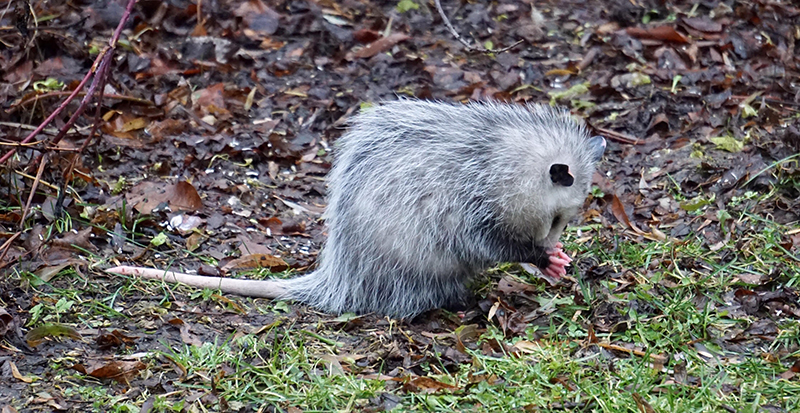 Does this opossum have an eating disorder? Al Batt/Albert Lea Tribune

“Everything is nearly copacetic. I hope everyone had a Thanksgiving almost as good as mine. I enjoyed the lefse at Thanksgiving. It’s bread, napkin, dessert and facial tissue all rolled into one.  But I get better mileage on coffee. I ordered something at Starbucks and told them my name was Bingo. I loved hearing the barista call that out. Some people groaned as if they had but one number left to make a winner of their bingo card. I ate some lutefisk. Some people look at lutefisk and ask, ’Why?’ I look at lutefisk and ask, ‘Why not?’ My nephew camped outside a store on Black Friday to be first in line to buy a tent. I hope he saved some money, because it’s too late to save his sanity. Pop says it’s going to be a nasty winter because the squirrel nests are high in the trees. I think he’s as nutty as the squirrels. I worked on Grandpa’s old cuckoo clock. The thing hadn’t worked since he died. I told Pop that my bill would be humongous. Repairs are expensive when the repairman doesn’t know what he’s doing. I fooled with it forever and it began to cuckoo. It sounded 27 times. That woke Pop. Pop thinks being retired means taking your shoes off when you get out of bed in the morning. He’d been napping in his easy chair. Even though it was 2:30 in the afternoon, Pop said, ‘I’d better get to bed. It’s later than it’s ever been.’”

I was tap dancing on ice while eating an apple, pleased that late-season apples usually keep the longest. As my gnawing neared its conclusion, I noticed the seeds of the apple. Fall is the season of seeds. Jack Frost has put much of the world to sleep. Seasonal shifts aren’t automatic. Before the weather becomes too severe, I notice autumnal recrudescence. The light levels around the spring equinox are similar to those at the vernal equinox. Many animals, especially birds, have hormone levels that vary with the amount of light during the day. Fall can create enough confusion to prompt singing or rooster crowing. I wonder if the blooming dandelion I saw not long ago is an example of autumnal recrudescence?

A vole scurried across my path. Voles breed throughout the year, but most commonly do so in spring and summer. They have one to five litters per year with litter sizes ranging from one to 11, averaging three to six. The gestation period is about 21 days, and the young are weaned at 21 days. Females mature in 35 to 40 days. Lifespans are short, ranging from 2 to 16 months. In one study, there was an 88 percent mortality during the first month of life.

“Do wild turkey hens ever have beards?” Yes, but it’s uncommon. Toms and jakes (young males) have nearly corralled that market. The beard is a cluster of long follicles in the center of the chest that can be up to 12 inches long. Hen droppings are spiral shaped, but gobblers typically leave an elongated J-shaped dropping. Native Americans used turkey spurs for arrow points and other sharp utensils.

Barb Thompson of New Richland asked if large muskrat houses foretell a harsh winter. Muskrat houses are dome-shaped mounds of piled marsh plants that cover holes in the ice. Muskrat mounds can be confused with beaver lodges, but aren’t made of woody material. Inside these shelters the rodents feed and rest. Folklore says muskrat houses are built big before a bad winter. I enjoy folklore, but I was unable to find any scientific credibility in this one. Many such beliefs are purely anecdotal and don’t hold up to empirical testing. Why are muskrat houses so big this year? Maybe the muskrats are eager beavers. Me, I look at the size or color of ice-fishing shacks, plus the thickness of the clothes of the fishermen and the size of their snow shovels to indicate winter’s severity.

“Do opossums eat ticks?” According to the Cary Institute of Ecosystem Studies, opossums groom themselves fastidiously and eat any trespassing ticks they find.

Please join me at the Albert Lea Seed House at 9:30 Saturday morning, December 15. I’d love to hear your stories and questions and see your photos.

“Ralph Waldo Emerson once asked what we would do if the stars only came out once every thousand years. No one would sleep that night, of course. The world would become religious overnight. We would be ecstatic, delirious, made rapturous by the glory of God. Instead, the stars come out every night, and we watch television.” — Paul Hawken

“All my life I always wanted to be someone. I see now I should have been more specific.” — Lily Tomlin