A Level 3 offender charged in multiple files was sentenced to two years in prison Friday in Freeborn County District Court. 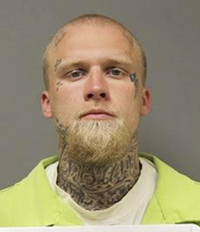 Cody Padraic Trott, 28, was sentenced after he pleaded guilty to felony threats of violence in October. Judge Ross Leuning gave Trott credit for 289 days served, and the offender will serve his sentence at Minnesota Correctional Facility in St. Cloud.

Court documents state Trott was charged after officers were dispatched the night of Jan. 3 to a business parking lot in Freeborn County. Upon arriving, the victim said Trott strangled her and took her vehicle after making allegations against her.

Trott was charged with attacking her by jumping on her in the vehicle, grabbing her throat and threatening to kill her.

Trott was later found and arrested after a short foot pursuit.

Trott was charged with domestic assault by strangulation, unauthorized use of a motor vehicle, fifth-degree controlled substance possession and gross misdemeanor domestic assault, but those charges were dismissed.

Leuning sentenced Trott to 90 days in jail and was given credit for 90 days served for five domestic abuse no-contact order violations.