Al Batt: Nuts, squirrels and folklore of putting a nest in the Christmas tree 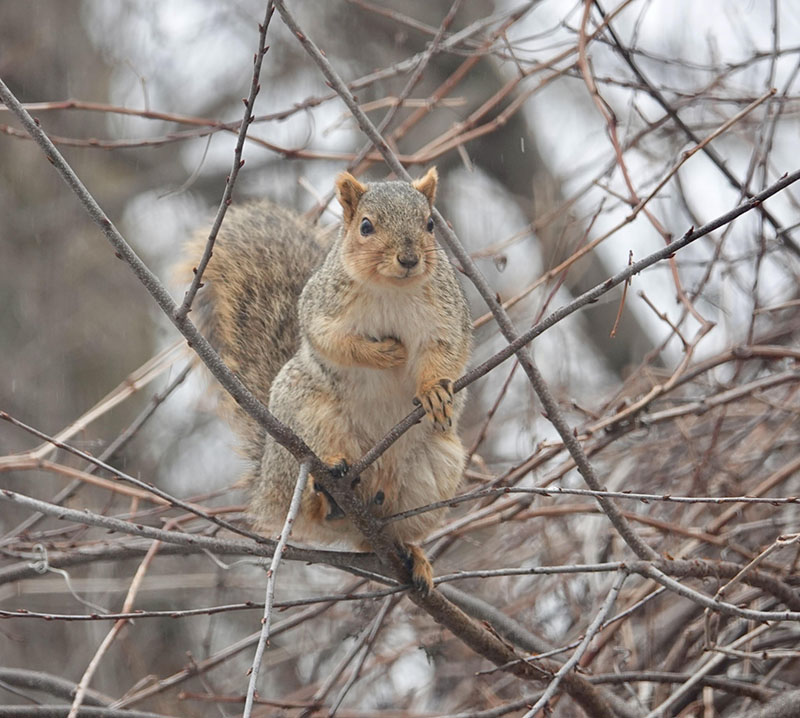 “Everything is nearly copacetic. I gave Ma a new washing machine and all my dirty laundry for Christmas. I’ve decided to make a bunch of New Year’s resolutions.”

“Good for you. Each of us is in need of constant tinkering,” I say.

“And I’m giving up eating raccoon jerky, opossum chili, deep-fried butter, chislic, livermush, chitterlings, Cincinnati chili (it has spaghetti in it), scrapple and fried rattlesnake. I’m not going to sink a fang in any of those foods.”

“How do you expect to give up sports you’ve never participated in and to stop eating foods you don’t eat?” I ask.

My wife threw out some nuts for the squirrels. The squirrels didn’t take long to find them. One fox squirrel chased another fox squirrel and a red squirrel away. In between chases, the squirrel grabbed the nuts like a Black Friday shopper with a new credit card. It carried a morsel away and buried it in the snow in a different spot on the lawn. A hole was dug, the nut dropped into it, the hole covered and the snow patted down. This was done while keeping an eye out for other squirrels. This process was continued until all the nuts were hidden.

“Why does a friend put a bird nest in her Christmas tree?” Folklore says that if you have a bird nest in your Christmas tree, your family will experience health, wealth and happiness in the coming year. Use an artificial nest, as the Migratory Bird Treaty Act makes it illegal to take, possess, import, export, transport, sell, purchase, barter, or offer for sale, purchase, or barter, any migratory bird, or the parts, nests, or eggs of such a bird except under the terms of a valid federal permit.

Millie Woller wondered why there were many birds at her feeders one day and barely any the next day. That’s a great question, and like so many great questions, there are many answers. Some possible factors are: A predator showed up. A hunting hawk in my yard sure drops the census numbers. Birds are in constant search of food sources and can quickly move to a neighbor’s feeder. Nice weather makes it easier to sample natural food supplies, so birds might take that opportunity to hunt for new food. Some of the birds you see at your feeder in the morning may not be the same birds you see in late afternoon. Birds move to other areas. Family groups break up. They migrate. They find new food sources. They establish new territory. Or it could be another reason. A predator and the availability of natural foods are the primary reasons causing desertion at my feeders. Birds have wings. They come and go. Bad weather does make for a busy bird table.

Doug Christopherson of Albert Lea asked about some white and black ducks he’d seen with mallards. Leucism occurs in mallards, but the mallard has been known to breed with approximately 40 other species of waterfowl, plus some domestic ducks. The mallard is the ancestor of most domesticated ducks. Mallards frequently breed with their closest relatives such as the American black duck and also with species more distantly related, like the northern pintail.

“I saw a raccoon in late December? Shouldn’t it be sleeping?” Raccoons winter in places like tree cavities, animal burrows, abandoned buildings, chimneys and rock crevices. They stay in their dens and sleep lightly during bad weather. When temperatures and weather improve, they are out looking for food. They eat as much as possible in the fall, in order to build an extra layer of fat. They don’t hibernate, but hole up in dens during the nastiest winter days and are capable of sleeping for long periods of time. Raccoons are typically solitary creatures, but sometimes den in groups during cold weather.

“Do birds ever freeze after using a heated bird bath in the winter?” I have never encountered a feathered popsicle, but a friend tells of finding cardinals unable to fly due to frozen feathers. Some people put rocks in the bath or boards over the bath to allow drinking, but not bathing when the temps become frighteningly frigid.

“I think nature’s imagination is so much greater than man’s, she’s never going to let us relax.”— Richard Feynman