Al Batt: Square v. rectangle: All bugs are insects, but not all insects are bugs 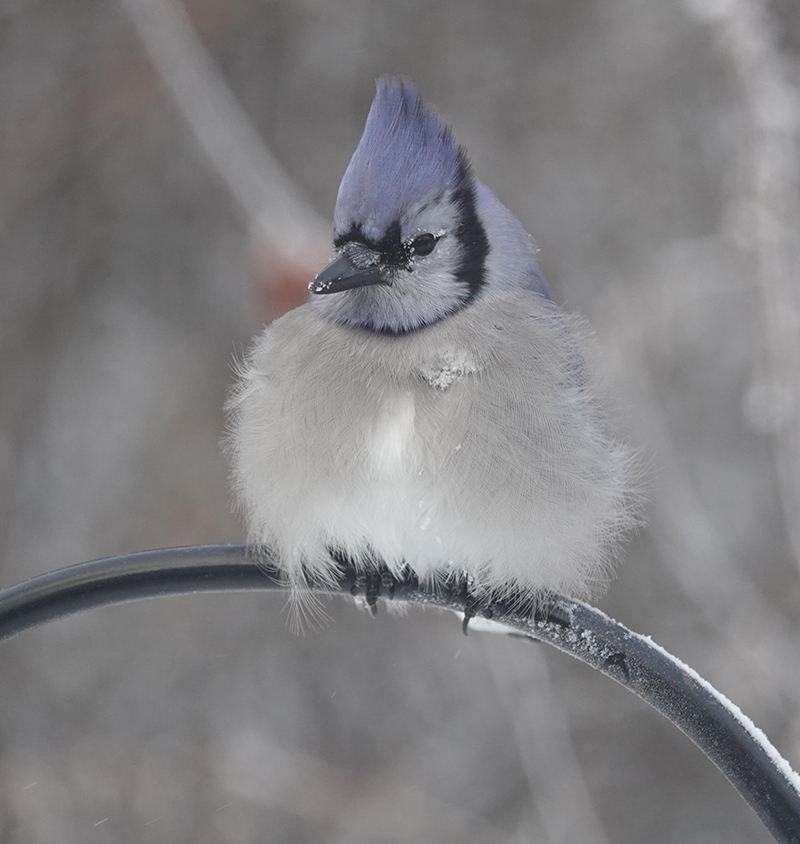 It helps to be fluffy when the weather is cold. Al Batt/Albert Lea Tribune

“Everything is nearly copacetic. I finally got that coffee stain out of my new coat.”

“How did you do that?” I say, knowing the cleaners had given up on it.

“I used an old family secret. It removes most stains easily. It’s called a scissors.”

Eastern cottontails danced in the night’s moonlight. I watched when dawn arrived as they fed upon twigs, stems and bark. Rabbits venture from hiding places at dusk and dawn to find food.

I take a walk to see how the critters are wintering.

Fox, gray and red squirrels bulk up and cache food for winter. This lessens the need to spend time foraging in severe weather. They weather a storm in a drey, a type of nest in the forks of trees that the squirrels build of dry leaves and twigs. They also use tree cavities and nestboxes. Red squirrels cache cones and nuts in middens, piles of food and leftovers. They hang fungi in trees for winter eating.

Chipmunks sleep in their burrows, waking periodically to eat stored food. Ground squirrels and groundhogs use stored fat for maintenance energy during hibernations.

Voles build nests and tunnels under an insulating blanket of snow and eat from a cache of seeds and nuts or consume bark and roots in this subnivean environment. Subnivean means beneath the snow. When forced to leave this safety zone, voles become vulnerable to predation by hawks, owls and foxes.

A red fox stays warm by growing a winter coat and curling into a ball on open ground, using its tail as a warm scarf.

I saw deer tracks at the edge of the yard. Deer change from grazing to browsing in winter. Their gray-brown winter coats have hollow hair shafts and a dense underfur that provides excellent insulation.

Not capable of growing much of a fur coat and unable to construct a suitable drey, some humans opt to migrate to areas of warm temperatures with an abundance of restaurants. The rest of us stay here.

“Why are cedar waxwings called waxwings?” The name comes from the waxy red tips of the secondary wing feathers of some birds. The first part of the common name is based on their fondness for cedar tree berries. A group of waxwings is known as an earful or a museum. You might see some tomorrow, as they’re more nomadic than migratory.

“I watched songbirds flock around a screech owl. Why do they do that?” Birds mob predators as a collective response to danger. Are they trying to drive the threat away or call attention to it? Maybe both.

“Is it correct to call insects “bugs”?” The insects don’t mind. People tend to use bug to identify many small creatures. However, a true bug belongs to the order Hemiptera. A true bug has a stylet (a mouth like a straw) that they generally use to suck juices from plants. Leafhoppers, aphids, cicadas, stink bugs and bed bugs are true bugs. Insects belong to the class Insecta and are characterized by three-part bodies, usually two pairs of wings and six legs. Bees and mosquitoes are good examples. Arthropods are in a separate phylum from bugs and insects. They include centipedes, spiders and ticks. Not all insects are bugs, but all bugs are insects. To repeat myself. To repeat myself, a key difference between true bugs and other insects are the mouthparts. True bugs suck.

“My grandfather said that dogs with floppy ears make the best trackers. Is he right?” Of course, he’s right. Grandfathers are always right. Beagles, Basset hounds, bloodhounds and coonhounds are exceptionally good trackers. That’s partially because their long, floppy ears scoop up scent particles and send them toward the nose. Long ears might limit a dog’s ability to hear distant sounds, forcing the canines to rely more on a sense of smell.

“Do windows of houses kill many birds?” The study “Bird–building Collisions in the United States: Estimates of Annual Mortality and Species Vulnerability” was published in The Condor in 2014. It was authored by Scott R. Loss, Sara S. Loss, and Peter P. Marra of the Smithsonian Conservation Biology Institute and Tom Will of the U.S. Fish and Wildlife Service. The study provided quantitative evidence to support the conclusion that building collisions are second only to cats as the largest source of direct human-caused mortality for U.S. birds. They found that roughly 55 percent of the avian mortality occurred at low-rises, 44 percent at residences and 1 percent at high-rises.

“No snowflake ever falls in the wrong place.” — Zen proverb